Production of the battery-powered pickup will begin in the first half of 2022.

Ford Motor Company (F -0.68%) said that it has broken ground on a new electric-vehicle manufacturing center in Michigan, where it will build a battery-electric version of its iconic F-150 pickup truck.

Ford said the new facility is part of a $700 million investment in its historic Rouge manufacturing complex in Dearborn, where it builds the majority of the F-150 pickups sold in the United States. Once complete, the electric-vehicle facility will employ about 300 new workers, the company said.

Ford is in the midst of launching an all-new version of the F-150 for the 2021 model year. Production of the new trucks, in internal-combustion and hybrid versions, has begun at Ford's Dearborn Truck Plant, adjacent to the new electric-vehicle facility on the Rouge campus.

Production of the fully electric F-150 is expected to begin by mid-2022. While Ford hasn't yet shared the specifics, it confirmed that the new truck will be a dual-motor design with "more horsepower and torque than any F-150 available today," and a "giant front trunk" in the space normally dedicated to an internal-combustion engine.

Ford said that prototypes of the electric truck are currently undergoing "tens of thousands of hours" of testing under a variety of harsh conditions. 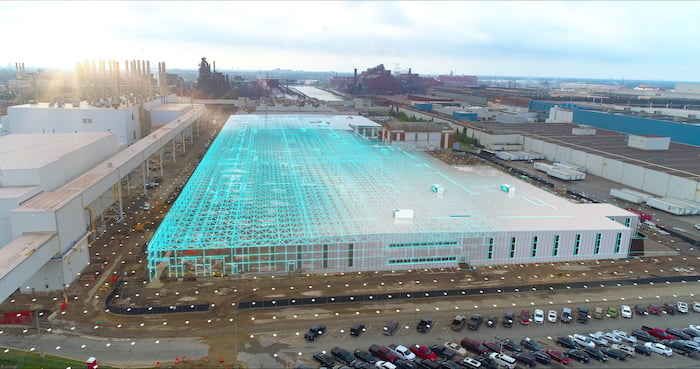 A rendering of Ford's new electric-vehicle manufacturing facility in Dearborn, Michigan, currently under construction. Ford's Dearborn Truck Plant, where production of the new 2021 F-150 has begun, is visible to the right. Image source: Ford Motor Company.

At a ceremony marking the groundbreaking, Executive Chairman Bill Ford talked up the added jobs and the company's commitment to U.S. manufacturing.

"This year's COVID-19 crisis made it clear why it is so important for companies like Ford to help keep our U.S. manufacturing base strong and help our country get back to work," Ford said.