Worries of a second wave in Europe are weighing on the energy market.

Major benchmarks stumbled into the week, with most stock market indexes falling more than 2% by 11 a.m. EDT on Monday. That sell-off spilled over into the energy market, causing crude oil prices to plunge nearly 5%, putting downward pressure on most energy stocks. Several declined by more than 5%, including Brookfield Infrastructure (BIP 0.84%), Callon Petroleum (CPE -2.62%), Halliburton (HAL -5.58%), and Phillips 66 (PSX 1.01%).

The main culprit driving today's sell-off was a jump in COVID-19 cases across Europe. That sparked fears that the continent might reimpose lockdowns, which would impact its economic recovery. It would also affect demand for oil, which has already been under pressure due to the sluggish rebound in consumption. 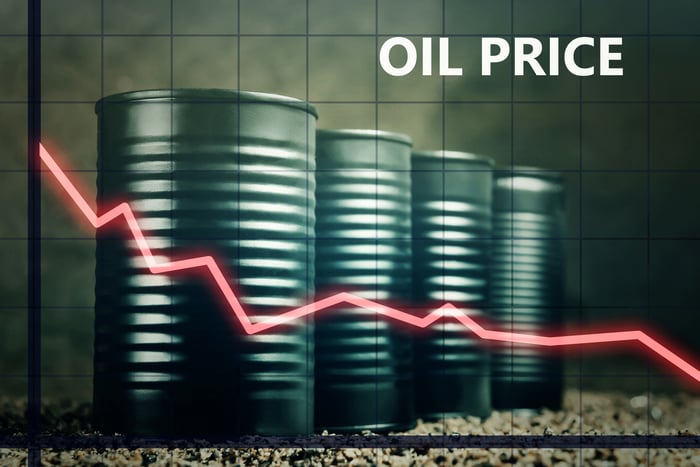 Those concerns are causing a broad-based market sell-off because it will impact most companies tied to the energy sector. For example, Brookfield Infrastructure doesn't have any direct exposure to commodity prices, since regulated rates back its utilities and fixed-rate contracts insulate its energy midstream assets. However, some of its other infrastructure assets have some volume risk, particularly in its transportation business. Thus, an economic slowdown could affect Brookfield's earnings, especially the company's global ports business, since it could slow maritime trade.

Similarly, oil-field services giant Halliburton doesn't have any direct exposure to energy prices. However, as oil prices fall, it impacts the cash flows of producers like Callon Petroleum. As a result, they typically pull back spending on drilling new wells, which affects Halliburton's activity level and the prices it charges customers for its services.

Meanwhile, falling prices will directly impact Callon, which is already suffering from the collapse in crude oil prices earlier this year. That downturn put it in such a dire financial position that it might not survive another big crash in crude oil.

Finally, refining giant Phillips 66 usually benefits from lower oil prices because it reduces costs since the company buys crude oil to refine into gasoline, diesel, and jet fuel. However, the COVID-19 outbreak has hammered demand for refined products, which has impacted its volumes and margins. As a result, with cases rebounding, Phillips 66's volumes and margins will likely face some renewed pressure.

Health officials have warned that a second wave of the COVID-19 outbreak could hit during the fall as schools reopened and the cooling weather forced more people indoors. That seems to be happening in many countries that tamed their spreads over the summer months, and now they might need to reimpose restrictions to get their outbreaks under control. If that occurs, it will likely impact energy demand, which could send prices even lower.

That would affect most companies focused on the sector, including leveling a potentially devastating blow to financially weaker ones like Callon that are fighting for their lives following the earlier crash in crude oil prices. Given all that, investors should steer clear of financially troubled energy companies because they could be among those hardest hit if surging COVID-19 case levels cause governments to slam the brakes on their economic recoveries.