There's a world of growth potential in these two companies.

A bargain -- whether it is a car, a household appliance, or a stock -- is something that offers a good product for a relatively low price. A stock can be offered a discount for a variety of factors. In some cases, it might be due to macroeconomic forces, like the coronavirus pandemic. In other cases, it may be that it has not yet reached its true growth potential or got caught up in a sector sell-off.

Here are two stocks that qualify as bargains: Walt Disney (DIS -2.21%) and Green Dot (GDOT -0.72%). Let's find out a bit more about them and what makes them bargain stocks you might want to consider buying.

1. Disney: A wonderful world of opportunity

Like an old DVD of 101 Dalmatians or The Lion King, smart shoppers can pick up a good deal on Disney now in the bargain bin. Disney's stock price is down about 13% on the year, but the reasons are all pretty much tied to the pandemic. 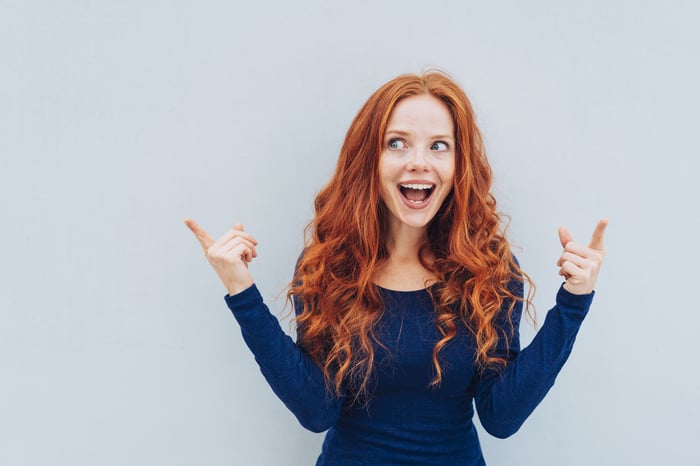 The biggest hit to Disney revenue has been due to closures followed by reduced-capacity reopenings at its theme parks. In its fiscal third quarter (which ended June 27), revenue from Disney's parks, experiences, and products segment was down 85% to $683 million. Furthermore, its studio entertainment segment, which includes Disney's movie business, was down 55% to $1.7 billion. While it may take a while, those businesses will both come back as the pandemic clears. There are varying estimates on when a vaccine will be widely available, but most medical professionals and scientists say it will likely happen by mid- to late 2021.

Until then, Disney's movies and parks will struggle. However, Disney is well diversified and has been able to offset those losses with gains in other areas. Specifically, its media networks, which include ABC and ESPN, saw operating income rise 48% year over year to $3.1 billion, mainly due to the deferral of sports programming rights and costs to future quarters. Still, without many of its live sports broadcasts, revenue for the segment was still only down 2%, buoyed by a 12% increase in broadcast TV revenue.

Also, the pandemic has allowed Disney to flex other muscles, like its direct-to-consumer and international business, which includes its on-demand properties like Disney+, ESPN+, and Hulu. Revenue from this segment was up 2% to $3.9 billion, led by the fledgling Disney+ streaming service, which now claims more than 57 million subscribers. Disney's decision to forgo a theatrical release of its live-action film Mulan and offer it at a premium price on Disney+ this month seems like it was the right move and may pave the way for similar releases of other potential blockbusters. Hulu saw a 27% increase in subscribers during the quarter as both the on-demand and Hulu Live TV numbers were up.

Disney has boosted its cash position and has $23 billion in cash and cash equivalents, which should allow it to stem any losses over the next year or so. But when the pandemic clears, Disney will come storming back; you have an opportunity to buy or add positions at bargain price.

2. Zeroing in on Green Dot

Green Dot (GDOT -0.72%) is one of the largest providers of prepaid debit cards, but it also offers banking-as-a-service (BaaS) opportunities for a range of clients, including Uber Technologies, Apple, and Walmart, a company it recently expanded its relationship with. Basically, its platform allows companies to design their own banking solutions.

While the debit card business generates the most revenue, the greatest growth has come from the BaaS side. The number of direct-deposit active accounts grew to $3.1 million in Q2, up from 2.3 million a year ago. Furthermore, gross dollar volume from direct deposit sources increased by 35% to $10.5 billion over the past year. Overall, operating revenue was up 13% year over year to $316 million in the second quarter. The fact that Green Dot is a chartered bank gives it an advantage over other BaaS fintech providers, which need to partner with banks. Green Dot, on the other hand, has turnkey service. CEO Dan Henry said he sees the company's banking charter as a "strategic asset, a competitive differentiator and a source of immense potential value," on the company's first-quarter earnings call.

The BaaS growth has been a key element of the company's growth this year as the stock price is up about 105% year to date. The company has a plan to reduce expenses by $30 million this year as it looks to become more efficient and improve free cash flow and profit margins. It currently has $1.9 billion in cash and cash equivalents on its books, up from about $1 billion at the start of the year.

Green Dot stock was a lot cheaper before this year's run-up, but it is still a relatively good value. The stock price has lost about 10% over the past month during the tech sell-off, so this may be a good time to get it at a bit of a discount. Analysts project 12% annual earnings growth for Green Dot over the next five years and, given its financial position and leadership position in the growing prepaid debit card and BaaS industries, it should be able to achieve that kind of growth.

Both of these stocks are good values with great long-term growth potential. Their growth may be slow during the recession and pandemic, but over the long run they will pay off.

A Bull Market Coming? If So, Disney Is a Must-Buy Stock