On the first day of trading, shares of digital drug coupon company GoodRx (NASDAQ:GDRX) are up more than 50% from its initial public offering (IPO) price of $33. Just nine years after its inception, GoodRx is worth nearly $20 billion, and its namesake app is now the most downloaded medical app in America, with a 4.8 out of 5 rating through customer reviews.

There is undoubtedly a lot of enthusiasm for the company's future in the investment world. Many wonder if GoodRx stock will climb even higher in the weeks ahead, or fall back down to more more reasonable levels. Today, let's take a look as to whether or not investors interested in healthcare stocks should add GoodRx to their portfolios. 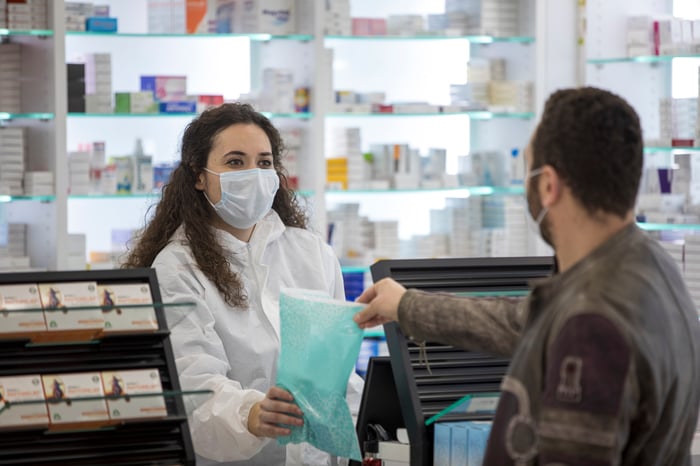 GoodRx is a free-to-use service that allows Americans to find the lowest-cost prescription drugs in their area. The company makes money by receiving a commission for every prescription order filled via its coupons, which are accepted by nearly all 70,000 pharmacies across the country.

Consumers can receive up to 70% off branded and generic drug prices using the free-version GoodRx coupons. Some drugs end up costing less with these coupons than with patients' insurance co-pays. GoodRx also has its own membership available, where subscribers pay $5.99 per month for the right to access more than 1,000 drugs for the price of less than $10 per prescription, resulting in up to 90% savings.

The company has helped consumers save $20 billion in drug costs since its founding in 2011. About 4.9 million people use GoodRx's services every month, and more than 80% of those are repeat users.

How do its financials look?

Because GoodRx's business model is so unique, it can generate stable and growing returns for shareholders. In fact, the company's net income has grown every year since 2017. In the first six months of 2020, GoodRx brought in $256.7 million in revenue and $0.15 in earnings per share (EPS), compared to $173.2 million in revenue and $0.09 EPS in the first half of 2019. The company's capital structure is well-balanced too. GoodRx sports about $1.43 billion in debt and preferred stock liabilities, which can be offset by its $1.127 billion in cash after the IPO.

Is the stock expensive?

Perhaps unsurprisingly, the company's good results are already baked into its stock price. GoodRx's market cap stands at $18.95 billion as of Sep. 25, giving it a price-to-sales (P/S) ratio of 37.1 and a price-to-earnings (P/E) ratio of 201. That's a hefty premium to pay, even for a company that has been growing its revenue by about 50% per year since 2016. The stock looks even more expensive if investors consider that the average P/E ratio for companies in the healthcare industry is about 24.

The main reason why I'm skeptical of holding GoodRx for the long term is its business model. The problem of paying high prices for prescription drugs is a uniquely American one, as governments of other developed nations have the power to negotiate drug prices with manufacturers, thereby cutting the need for GoodRx as an intermediary. The fact that drug prices are rising is great for GoodRx, but the trend might not be economically sustainable. Pharmaceutical companies recorded more than 800 price increases this year, and adjusted the cost of 42 medicines upward by an average of 3.3 percent, according to GoodRx. But if national policies ever take a turn toward seriously curbing drug prices, I suspect that the company will have a hard time maintaining its growth momentum.

GoodRx is undoubtedly an excellent business that addresses the economic and medical needs of patients. However, its stock is too expensive at this point to be added to a portfolio. There may be some money to be made for those who like to speculate in growth stocks just as they launch their IPOs. For others, it's probably best to wait and buy GoodRx at a more reasonable level.