Please ensure Javascript is enabled for purposes of website accessibility
Log In Help Join The Motley Fool
Free Article Join Over 1 Million Premium Members And Get More In-Depth Stock Guidance and Research
By Keith Speights – Oct 2, 2020 at 6:12AM

Buying 140 biotech stocks in one fell swoop could be a winning strategy.

There's a thrill associated with investing in biotech. Many companies are developing new drugs that could dramatically change how diseases are treated. Some are even working on potential cures for certain diseases. Seemingly every week brings news with the potential to send some stocks soaring (and sometimes sinking, too).

If you want to invest in biotech stocks, you have lots of options. These options include some large, highly successful companies such as Biogen (BIIB 0.56%) and Gilead Sciences (GILD 0.98%). These two big biotechs have together reshaped the landscape for treating several diseases.

If you're looking to make strong returns investing in biotech, there's another alternative that you might not have heard much about: biotech-focused exchange-traded fund SPDR S&P Biotech ETF (XBI 0.07%). This ETF is absolutely crushing Biogen and Gilead. 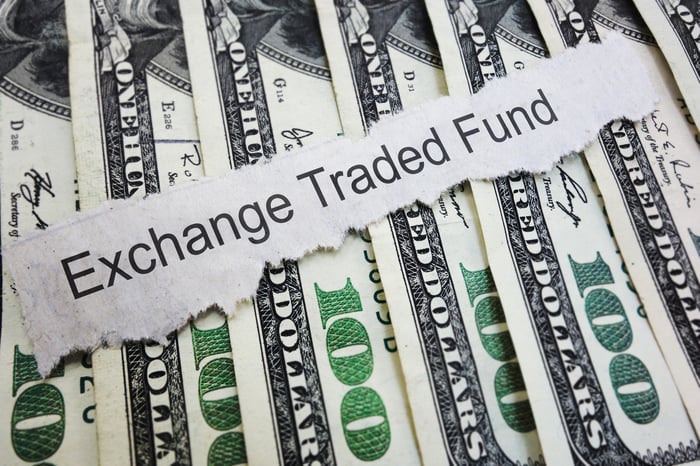 Highlights of this high-flying ETF

The SPDR S&P Biotech ETF (we'll refer to it by its ticker, XBI, going forward) is one of several industry-focused ETFs managed by financial services firm State Street. The ETF has been available to investors since 2006 and now has more than $5.2 billion in assets under management.

XBI attempts to track the total return of the S&P Biotechnology Select Industry Index, adjusted for fees and expenses. Its annual expense rate currently stands at 0.35%. That's higher than broad market index ETFs, but in line with most other biotech-focused ETFs.

There are a couple of important things you should know about the index that XBI tracks. It focuses only on biotech stocks included in the S&P Total Market Index, which tracks the overall U.S. equity market. The index is also primarily equally weighted. This means that stocks of companies with bigger market caps don't dominate the index.

XBI currently holds positions in 140 biotech stocks. None of these individual stocks makes up more than 1.9% of the ETF's total holdings.

By how much has XBI outperformed big biotechs such as Amgen, Biogen, and Gilead? A lot. Here's how their performances compare over so far in 2020. 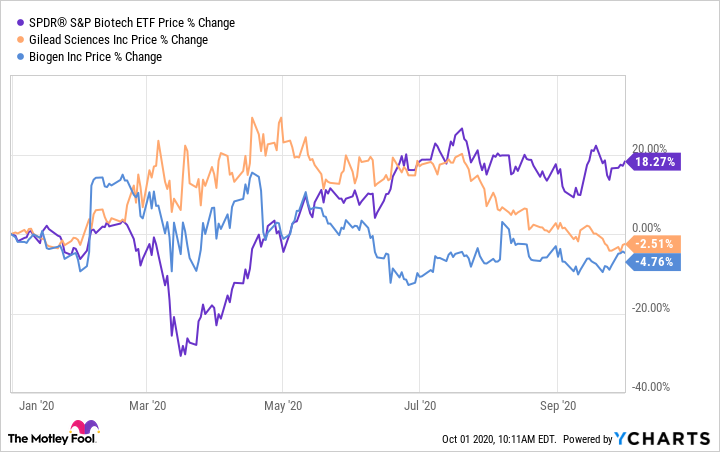 Both Biogen and Gilead were beating XBI earlier this year. However, neither stock has kept up with the biotech ETF in recent months. Even Gilead's September announcement of its planned acquisition of Immunomedics, XBI's top holding, wasn't enough to spark a comeback.

Of course, only looking at a nine-month period could be misleading. How has XBI held up against the big biotech stocks over the last five years? Again, it's no contest. 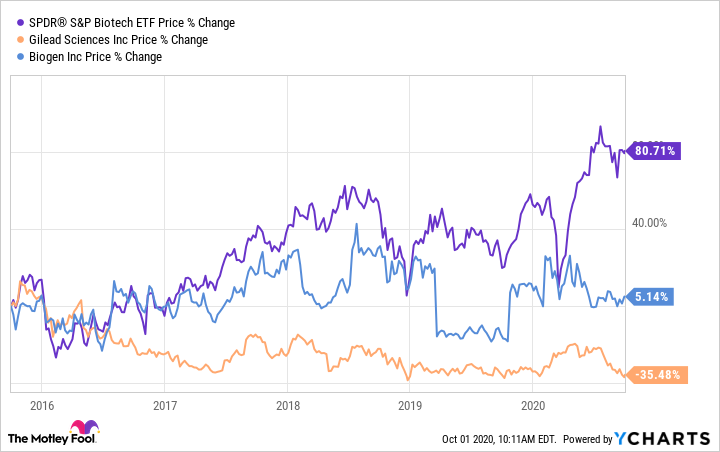 To be fair, these charts only showed stock returns rather than total returns, which include dividends. But even with dividends included, XBI has handily beaten both Biogen and Gilead.

You shouldn't invest in XBI just because it has beaten well-known biotech stocks like Biogen and Gilead Sciences. However, there are several reasons to seriously consider buying XBI.

First, biotech is hot and should get even hotter. The pace of innovation in the industry is mind-blowing. Some experts think that the 21st century will be known as a biotech revolution.

Second, it's next to impossible to know which specific biotechs will become the biggest winners. Some of the smaller biotechs of today could become bigger than Biogen and Gilead in the future. You could be prescient or lucky in identifying which ones will succeed, but it's easier and less risky to invest in a basket of biotech stocks through an ETF like XBI.

Investing in specific biotech stocks can be a good idea -- if you're thoroughly familiar with the biotechs' pipeline prospects and the competitive dynamics of the markets they target and if you understand the risk-reward profile for the stocks. For many investors, though, going with a biotech-focused ETF is a better option. XBI could give you a better chance at experiencing the thrill of investing in biotech with less risk of experiencing the agony of defeat.