Videoconferencing has become a ubiquitous experience this year, with Zoom Video Communications (ZM 2.04%) garnering the lion's share of the benefits with a more than 600% return year to date. NVIDIA (NVDA 1.96%) is looking to get in on the action, too, specifically with the goal to make video calling better for users and videoconference software providers alike. To that end, NVIDIA, the leading graphics processing unit designer, today announced a new platform called Maxine to make incremental improvements for online video experiences. 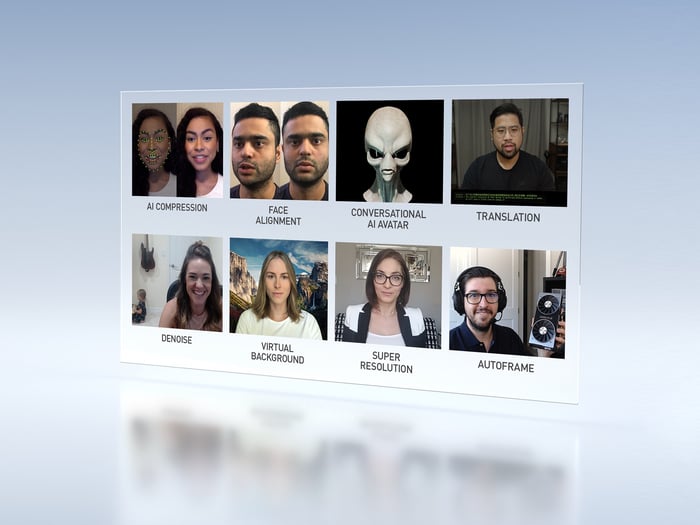 One of the biggest challenges in videoconferencing is video quality. On a web conference, a user's computer (and internet connection) need to both download video from other participants and upload their own video. This can create lag or poor image quality during the conference.

NVIDIA says its Maxine platform helps eliminate the problem by reducing the number of pixels on-screen by recreating a facial image using artificial intelligence (AI). Reducing the number of pixels lowers the required bandwidth of the video stream, which improves video quality -- not to mention reducing the power consumption for the user and the videoconference provider. Maxine cuts power consumption down to a 10th of the original need, NVIDIA says.

Other features on the new platform include the ability to turn on face and gaze alignment so participants in a call appear to be facing each other and maintaining eye contact while speaking. An autoframe option can also be turned on so the camera automatically adjusts and moves if a speaker moves. NVIDIA Jarvis is part of the platform, to add AI assistance to meetings to handle tasks like note taking, translating, and answering user questions. And for those more-informal video meetings, Maxine has optional features to allow users to add avatars and other real-time animation driven by their tone of voice.

Maxine isn't a video-service subscription for consumers, but is rather a cloud-based software suite aimed at video service providers themselves. The Maxine platform is available now as an early access program for AI and computer vision developers. But it could find its way into plenty of online video services in the near future as NVIDIA continues to transform itself from a semiconductor pure-play company to AI hardware and software service provider.