The Dow Jones Industrial Average (DJINDICES:^DJI) was in rally mode on Monday, up 1.33% by 11:50 a.m. EDT. This rally came against the backdrop of President Donald Trump being hospitalized for COVID-19, as well as a renewed effort by Congress to pass additional stimulus measures to boost the pandemic economy.

Tech giants Apple (NASDAQ:AAPL) and International Business Machines (NYSE:IBM) were rising on Monday along with the Dow. Apple stock got a boost from an analyst who sees the digital payments business as a growth driver, and IBM stock rose after the company announced a new blockchain-based platform. 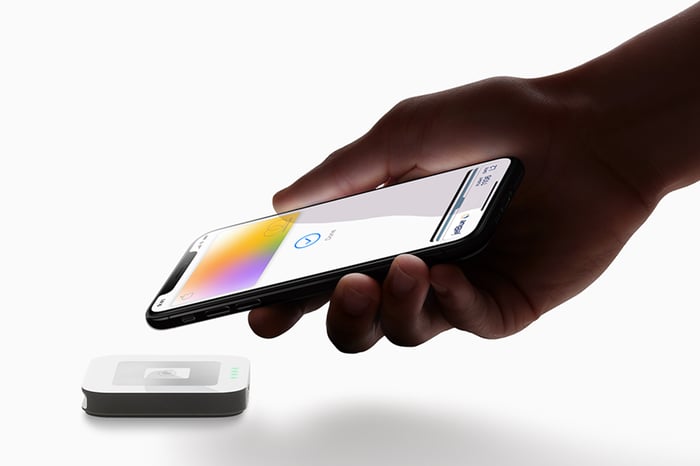 Analysts at Cowen maintained an outperform rating and a $133 price target on Apple stock on Monday. Part of what's driving that optimistic rating is the tech company's digital payments business.

Cowen sees digital payments hitting $1 billion of revenue for Apple this year, then jumping to over $2 billion by 2022. Cowen analyst Krish Sankar pointed to strong increases in usage and penetration for the Apple Card during the pandemic in North America. Sankar sees Apple Card positioning the company as a contender in the fintech industry.

Apple's broader services segment is one of its key growth engines. While the company saw solid growth in hardware sales during its most recent quarter, that growth may not be sustainable without additional economic stimulus. The jury is still out on exactly how much of Apple's recent sales success is tied to the unprecedented stimulus extended to Americans during the pandemic.

The company's shares were up about 1.9% by late Monday morning, helped along by a broad stock market rally. This erases only a small part of the stock's recent losses. Since peaking at the start of September, shares of Apple are down about 14%.

Apple is expected to unveil its upcoming 5G iPhones soon. The devices were delayed from the normal iPhone launch window due to the pandemic.

One company that's been working to apply blockchain, the distributed database technology that underlies cryptocurrencies like bitcoin, to a wide variety of industries and use cases is IBM. Major blockchain initiatives so far include a food safety platform and a global shipping platform.

On Monday, IBM announced that Bank of Thailand, that country's central bank, had launched a blockchain-based platform for government savings bonds. The bank issued bonds totaling $1.6 billion within two weeks using the platform, which runs on IBM Cloud. IBM claims the platform reduces the bond issuance process from 15 days to two.

The blockchain platform reduces operational complexity and the overall costs of issuing bonds. IBM's announcement says that, with the platform acting as "an immutable, real-time single source of truth," redundant validation is minimized, and the costs of reconciliation are reduced. Bank of Thailand is planning to extend blockchain to all other government bonds in the future.

IBM has been transforming itself for years, shifting away from certain legacy businesses and investing in fast-growing technologies like blockchain, hybrid cloud computing, and artificial intelligence. The pandemic has hurt its results, largely due to clients pausing purchases due to uncertainty. But in the long run, the company has built a portfolio that should allow it to return to sustainable growth.

Shares of IBM were up about 1.1% by late Monday morning. The stock has shed about 9% of its value this year.