There has been no shortage of hype surrounding blockchain over the past few years. It's the latest "change the world" technology, and people tend to get excited about those. But beyond trials, tests, cryptocurrency, and start-ups, successful real-world applications of the technology have been few and far between.

One company that has found success turning blockchain into a real business is International Business Machines (NYSE:IBM). IBM is trying to apply blockchain to many different areas and industries, but food safety is perhaps the most notable so far. IBM's Food Trust blockchain platform is now generally available, and the company has added a handful of new partners on top of Walmart, which committed to the platform last month. 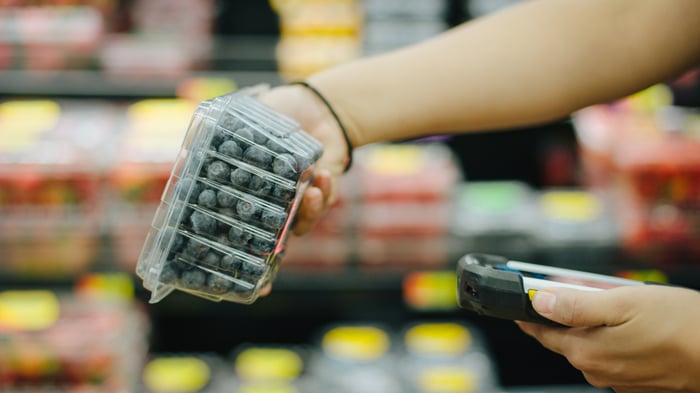 What is IBM Food Trust?

IBM Food Trust is a blockchain-based cloud platform that allows food to be traced throughout the supply chain. The goal is to provide greater traceability, transparency, and efficiency, according to IBM.

The platform is capable of reducing the time it takes to trace the origin of contaminated food. It can take days or weeks to determine the source of a food-borne illness outbreak today. With IBM Food Trust, the source of the outbreak can be traced in seconds, potentially reducing the number of people affected. The platform can also be useful in maximizing shelf life and reducing spoilage losses.

Adding to the network

Walmart was the first major company to announce its intention to adopt IBM Food Trust in a significant way. The retailer is requiring suppliers of leafy greens to adopt the platform by Jan. 31, 2019, and it plans to expand that requirement to other suppliers over the next year. With Walmart being the leading grocery seller in the U.S., that news was a huge win for IBM's blockchain efforts.

IBM announced on Oct. 8 both the general availability of IBM Food Trust and the addition of a handful of other partners. Most notable was Carrefour, the French multinational retailer with more than 12,000 stores. Carrefour will use IBM Food Trust for some of its private-label products initially, with plans to expand to all its brands by 2022.

Topco Associates, a cooperative spanning 49 members, 15,000 stores, and 65 million weekly customers, has also joined IBM Food Trust. Wakefern, a 50-member cooperate with 349 stores, and suppliers including BeefChain and Smithfield have also committed to the platform.

Other companies are developing hardware and software for the IBM Food Trust ecosystem. 3M is working to allow its food-safety diagnostic equipment to communicate with the blockchain platform; Centricity offers solutions that make collecting, protecting, and sharing agronomic and compliance data simple, and Emerson is providing temperature-related information on in-transit cargo to improve shelf-life estimates.

IBM Food Trust should benefit from a network effect. The more retailers, suppliers, and other companies that adopt the platform, the more compelling and necessary the platform becomes for companies yet to make the plunge. It's not hard to imagine IBM Food Trust eventually becoming the standard across the industry, although that outcome is far from certain.

IBM charges monthly fees for all companies using the platform, starting at $100 for the smallest participants. At this point, the revenue contribution is likely negligible for IBM. But that could change if the platform takes off.

With momentum building for IBM Food Trust, I'd expect more announcements of partner additions in the coming months.