Blockchain is becoming a real business for International Business Machines (IBM 2.47%). After 18 months of testing, megaretailer Walmart (WMT -11.38%) will soon require certain suppliers to use IBM's blockchain-based Food Trust platform. The system reduces the time it takes to track a food item sold in a Walmart store back to its source, allowing for a quicker response to outbreaks of food-borne illnesses.

Walmart's Food Traceability Initiative is aimed at increasing transparency in the food supply chain. The company is starting with leafy greens, the source of a major outbreak of E. coli earlier this year. That outbreak lasted about three months, with officials eventually pinning it on tainted canal water in Arizona. Tracking down where a product originated can take a week using paper-based ledgers, according to VP of Food Safety at Walmart Frank Yiannas. 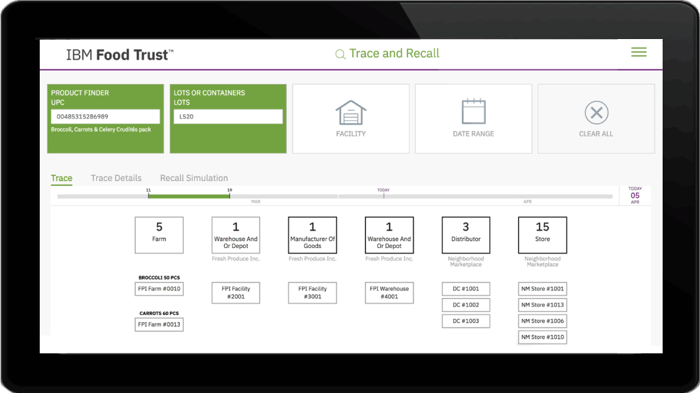 Walmart plans to extend this initiative to other fresh fruit and vegetable suppliers over the next year, according to Yiannas. The retailer is the largest seller of groceries in the U.S. by a wide margin, accounting for more than one-quarter of U.S. food sales. Given its size, the company's big bet on blockchain could eventually lead to a new industrywide standard for food traceability.

IBM is currently leading the $700 million market for blockchain products and services with a 32% share, according to WinterGreen Research as reported by Bloomberg. The company has around 1,500 employees working on blockchain initiatives.

Walmart's embrace of blockchain may be the most notable real-world use of the technology yet. IBM is involved in other initiatives, including a blockchain trade-finance platform for European banks and a blockchain shipping platform. But Walmart requiring some of its suppliers to adopt IBM's blockchain solution within a year represents a big vote of confidence in IBM's blockchain business.

Suppliers will pay IBM a fee for using its Food Trust blockchain platform. The charge starts at $100 per month for small businesses with annual revenues below $50 million, and it goes up to $10,000 per month for billion-dollar businesses.

This initial rollout from Walmart, covering just leafy-greens suppliers, likely won't produce all that much revenue for IBM. But a broader rollout from Walmart, covering all manner of fresh foods, and with the potential for other grocers to jump on board, could lead to significant recurring revenue for IBM down the line. If blockchain becomes the standard for tracking the food supply chain, IBM could have a meaningful new source of revenue on its hands.

In the same way that IBM's mainframe systems are entrenched in certain industries, there's the potential for IBM's blockchain solutions to become indispensable. The company's early start in the blockchain market gives it an edge, and it's certainly not squandering it.

Many companies testing out blockchain-based solutions haven't seen the kind of benefits they were hoping for. Something like 90% of blockchain trails will never go beyond the trial stage, according to Forrester Research.

But Walmart has found a blockchain use case that makes sense. And IBM could benefit for years to come.