TradeLens now has 94 participants on board, with full commercial availability set for later this year.

While cryptocurrency prices have crashed this year, the underlying blockchain technology still has potential. International Business Machines (IBM 1.21%) is one company betting that blockchain-based solutions can revolutionize industries by eliminating inefficiencies and slashing costs.

One industry ripe for digitization is global shipping. IBM and Maersk (AMKBY 1.79%) announced an initial collaboration back in March 2017 aimed at using blockchain technology to track the journeys of shipping containers around the world, with that partnership expanding to a joint venture last January. The result of that effort is TradeLens, a jointly developed blockchain shipping solution unveiled by the two companies on Aug. 9. 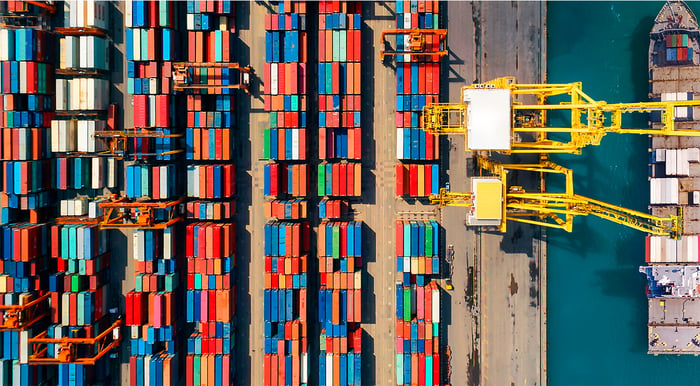 TradeLens is a blockchain-based platform that enables the various parties involved in the global shipping industry to share information securely and in real time. It's an "open and neutral industry platform," according to the TradeLens website.

Michael White, now the head of TradeLens at Maersk, said in a post back in January that the administrative cost of handling a container shipment is currently comparable to the cost of physically transporting that container. Complex webs of communication and paper-based processes slow things down and raise costs, and fraud is an ever-present problem. Digitizing the process could bring those costs down.

Peter Levesque, CEO of Modern Terminals, a company involved in the testing of the platform, said: "TradeLens uses blockchain technology to create an industry standard for the secure digitization and transmission of supply-chain documents around the world. This initiative will generate tremendous savings for our industry over time while enhancing global supply chain security."

During a 12-month trial of TradeLens, the system was able to reduce transit times significantly in some cases. IBM pointed to a 40% reduction in the example of a shipment of packaging materials to a production line in the United States. And the red tape involved in getting details about a shipment was greatly reduced, with trial participants estimating that a 10-step information gathering process could be reduced to a single step using TradeLens.

TradeLens has logged over 154 million shipping events so far, and that data is growing by around 1 million events per day. A total of 94 organizations are now involved with TradeLens, including more than 20 port and terminal operators, 3 global container carriers, customs authorities in a handful of countries, and some freight forwarders and logistics companies.

IBM and Maersk aim to maximize adoption of the platform, so the two companies are dropping the previously announced joint venture structure and instead are extending their collaboration agreement. This change comes after feedback from potential participants.

TradeLens is currently available for early adopters, and it's expected to be commercially available by the end of the year.

The jury is still out on whether blockchain technology will ultimately prove to be transformative. Plenty of companies are testing it, but around 90% of tests will fail to go beyond the trial stage, according to a report from Forrester Research cited by Bloomberg.

That's not stopping IBM from investing in the technology. The company has about 1,600 employees working on blockchain projects, and it's investing more than other leading technology companies. If it does take off, IBM will be sitting pretty. Gartner estimates that blockchain technology will add more than $3.1 trillion of business value by 2030. But like all long-term estimates involving technology, Gartner's should be taken with a grain of salt.

If there's any industry where blockchain technology could work, it's shipping. The number of parties involved, the complexity of transactions, and the prevalence of paper records combine into a perfect storm of inefficiency. If IBM and Maersk can get enough of the industry on board with TradeLens, and the platform works as expected, it would validate IBM's bet on the technology.

But those are big ifs.