Shares of International Business Machines (NYSE:IBM) have jumped nearly 10% since the start of 2018, as of market open Wednesday. Optimism about the company's multi-year turnaround seems to be building. An analyst at RBC Capital upgraded the stock earlier this month, one of few upgrades the stock has received in the past few years.

IBM stock got two more boosts this week. On Tuesday, the company announced that its blockchain collaboration with shipping giant Maersk (OTC:AMKAF) had blossomed into plans to launch a jointly built blockchain-based digital trade platform for the global shipping industry. And on Wednesday, another analyst upgrade rolled in, with Barclays moving IBM from "underweight" to "overweight" due to its cloud computing potential. 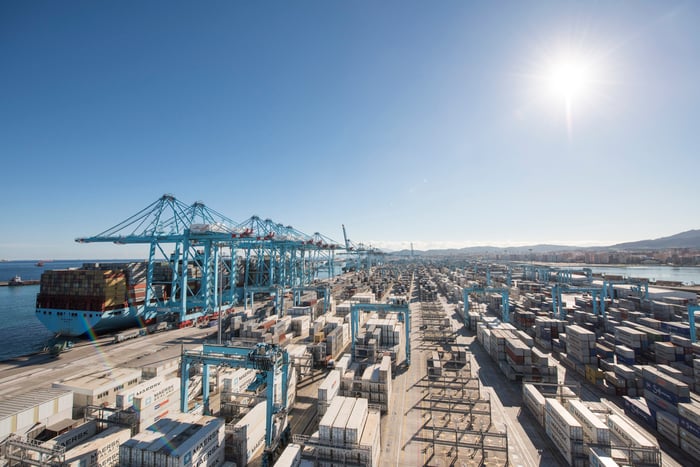 Blockchain is becoming a real business

IBM has made a lot of announcements about blockchain-based initiatives over the past year or so, but they've mostly been partnerships and collaborations aimed at exploring uses for the technology. The Maersk joint venture is notable because it marks the first time, at least that I'm aware of, that one of these high-profile collaborations has sprouted into a real business with the potential to produce meaningful revenue in the near future.

IBM and Maersk announced their collaboration in March 2017, which aimed to use blockchain technology to manage and track tens of millions of shipping containers by digitizing the supply chain process. That collaboration will now be enshrined in a joint venture, and it's expected to be up and running within six months, pending regulatory approval.

IBM claims that many global corporations with complex supply chains have expressed interest in using the platform, including General Motors and Procter and Gamble. Initially, the joint venture will commercialize two capabilities. A shipping information pipeline will provide supply chain visibility to all organizations involved. And Paperless Trade will digitize and automate filings, powered by blockchain-based smart contracts.

All of this is powered by IBM Cloud and built on IBM Blockchain technology. The company will almost certainly discuss this joint venture during its earnings call on Thursday afternoon.

Barclays analyst Mark Moskowitz based this upgrade mostly on IBM's cloud potential. While Amazon Web Services and Microsoft Azure are the leaders in the public cloud market, Moskowitz believes there's room for IBM to be another major player. He also sees revenue stabilizing and potentially growing over the next 18 months.

Another factor driving the upgrade is the recently disclosed CPU security bugs, one of which mostly affects Intel chips. The fix for this bug reportedly slows down Intel processors, sometimes significantly, and Moscowitz believes this could create an opening for IBM in the server chip market. IBM announced its latest POWER9 processors and systems late last year, and one of the company's aims is to win share in the hyperscale data center market.

That $192 price target represents about 15% upside from the current price.

A big earnings report is coming

IBM will report its fourth-quarter results on Thursday after the market closes. Analysts expect the company to finally put an end to its five-year streak of revenue declines, driven by the growing cloud business and the launch of its latest mainframe.

More important than the fourth-quarter results will be guidance for 2018. If IBM expects revenue and earnings to grow, that means it's finally reached an inflection point where its newer growth businesses are fully offsetting its slumping legacy businesses. After five years of a painful transformation, the light at the end of the tunnel is getting brighter.