With two more major ocean carriers jumping on board, TradeLens now covers more than 50% of the world’s ocean container cargo.

Part of International Business Machines' (IBM 0.93%) long-term growth strategy is to invest in applying blockchain technology to areas where the distributed database can make an impact. IBM is focusing on industries where digitization could provide major improvements in efficiency.

IBM's efforts in the global container shipping industry may be the company's biggest blockchain success so far. The tech company has been collaborating with shipping giant Maersk since 2017 on a blockchain-based platform for tracking shipping containers. That collaboration led to the launch of the TradeLens platform last year. 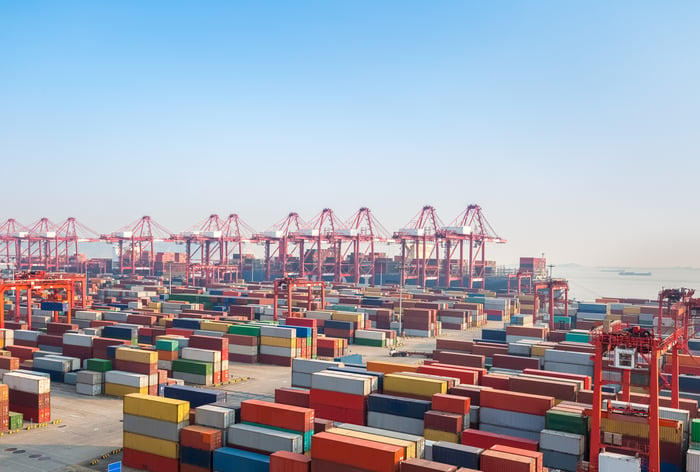 In May, IBM announced that CMA CGM and MSC Mediterranean Shipping Company, two major ocean carriers, had joined the TradeLens platform. On July 2, the company announced that two more major ocean carriers, Hapag-Lloyd and Ocean Network Express, had signed on. With those additions, five of the world's six largest carriers have joined TradeLens, and more than half of the world's ocean container cargo is now covered by the platform.

TradeLens is succeeding in getting competitors to join up because it's designed as a neutral platform. "We believe this innovative approach based on open standards and open governance can benefit the entire industry while ultimately benefiting our customers who rely on the world's shipping industry to transport global container volume of more than 120 million TEU across international borders each year," said Noriaka Yamaga, a managing director at Ocean Network Express.

Hapag-Lloyd and Ocean Network Express will each operate blockchain nodes on the network, and both will be represented on the TradeLens Advisory Board, which will advise on standards for neutrality and openness.

IBM's VP of supply chain solutions, Todd Scott, sees these new additions as a key moment for the platform:

I do think that it's a turning point. The whole value of a blockchain solution is to be able to have a large number of participants using the same platform. When you have a large number of carriers, ports and customs authorities, it creates that much more value for banks, freight forwarders and cargo owners. I think that's an incredibly powerful value add.

TradeLens provides value by reducing the need for paper-based and manual systems. The administrative cost of handling a container shipment today is comparable to the cost of physically transporting that container, according to Michael White, head of TradeLens at Maersk. By removing much of the complexity, TradeLens can speed up shipments, reduce costs, and cut down on fraud.

With four major ocean carriers joining TradeLens in the past few months, the platform appears to be on its way to becoming an industry-standard solution. That's good news for IBM -- the part of the platform where all the data from the network of participants is consolidated and accessible is powered by IBM Cloud. IBM benefits as usage grows, and TradeLens may now encompass enough of the industry that an alternative solution is unlikely to succeed.

While IBM's blockchain efforts have yet to flow through to its financial results, TradeLens is looking like a pretty big success story for the century-old tech giant.