Please ensure Javascript is enabled for purposes of website accessibility
Log In Help Join The Motley Fool
Free Article Join Over 1 Million Premium Members And Get More In-Depth Stock Guidance and Research
By Will Healy – Oct 6, 2020 at 7:30AM

These stores continue to expand as they emerge from the pandemic.

The retail industry has seen massive changes amid the coronavirus pandemic. Before COVID-19, many retailers felt the pressure of the e-commerce onslaught. When the shutdowns caused further pain, many stores could no longer sustain the pressure and went into bankruptcy.

However, other retailers have turned the situation to their advantage, specifically by sound management, or, if possible, changing their product mix to remain open and attract customers.

Such practices have better-positioned some retailers as they emerge from the pandemic. BJ's Wholesale (BJ 0.71%), Five Below (FIVE 0.22%), and Ollie's Bargain Outlet (OLLI -0.99%) are three such retail stocks investors should watch as the new year approaches. 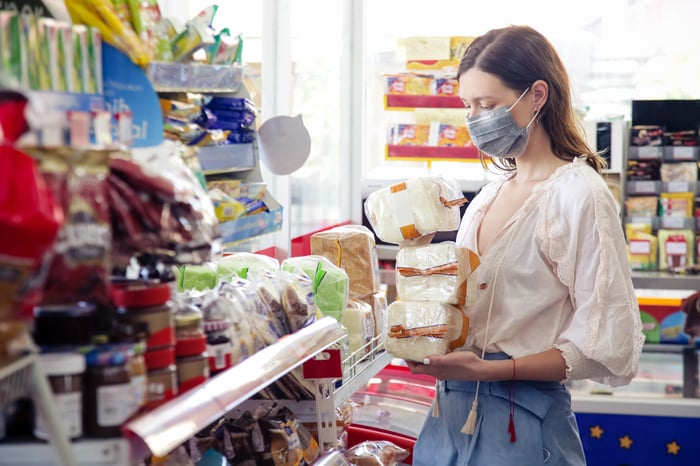 BJ's investors will likely look back at 2020 as the year that dramatically strengthened the business. Before the pandemic, slow growth and a heavy debt burden plagued the company. However, as pandemic-stricken consumers turned to BJ's for necessities, the company experienced a massive revenue spike.

As a result, BJ's began to generate as much free cash flow in a quarter as it recently generated in an entire year. This has allowed the company to reduce its debt and invest in further store openings. Many of these new stores will better serve its current East Coast footprint. Moreover, BJ's had recently expanded into Ohio and Michigan. With better funding and lowered COVID-19 restrictions, the company could see six new store openings in 2021 alone.

Furthermore, Wall Street may not have yet awakened to the potential of this mid-cap stock. Although it has doubled in value from the March lows, BJ's stock trades at a forward P/E ratio of less than 16.

That seems cheap, considering that the company is on track to increase profits by 81% this year. Even if 2021 earnings fall by 11% as predicted, BJ's is probably not going back to the slow earnings growth rates of the past. This should bode well for BJ's stock longer term.

As the name implies, Five Below sells most of its items at or below the $5 price point. It has made itself the Dollar General of teen-oriented merchandise, bringing ultra-discounting to a demographic with comparatively little earning power.

Because it operates in 38 states, it is close to serving the entire country. Nonetheless, with only about 950 stores, it has ample room for expansion within the U.S. alone.

This strength showed in its resiliency during the pandemic. Since it was not an essential business, store closures led to a loss of $0.91 per diluted share in the first quarter amid a 45% revenue decline. That quarter ended on May 2, as its stores had begun to reopen. Five Below then began to recover as earnings per share climbed by almost 4% year over year in the quarter ending Aug. 1.

Admittedly, the lower earnings helped lead to a forward P/E ratio of about 59 as profits have fallen temporarily. Still, the same analysts expect earnings to roar back next year with an increase of more than 103%. This should boost interest in Five Below while management seeks an eventual store count of over 2,500 in the U.S.

The current economic conditions suit a store like Ollie's well. The company performed reasonably well before the pandemic, offering brand-name closeout merchandise at a discount. This allowed Ollie's to expand to 378 stores in 25 U.S. states.

Investors should note that the pandemic slowed but did not stop growth at Ollie's. Pivoting its supply chain toward essentials allowed stores to stay open, and income to continue moving higher. During the first quarter, which ended May 2 as the economy began to reopen, the company managed a 6.5% increase in net income per diluted share.

Now, the numbers from the latest quarter indicate the company may have already recovered. Sales rose by almost 59% year over year. Also, earnings increased 197% from the year-ago quarter to $1.04 per diluted share.

Despite the massive growth, the market appears not to have fully embraced the Ollie's growth story. This may make the stock a huge opportunity. The forward P/E ratio of about 33 appears reasonable considering the massive growth. Moreover, with its presence in 25 states, Ollie's is likely on its way to a nationwide footprint. Additionally, with a relatively small number of stores, there is still time for new investors to see outsized profits over time.