The denim giant is building a repeat-business ecosystem that consumers can appreciate.

With nothing more than a passing glance, it just looks like another way of widening the company's promotional web. Recycled apparel is in vogue, so if nothing else, there's publicity value packed into the idea. The new online venture from denim apparel brand Levi Strauss (LEVI 2.29%) that will resell secondhand jeans, however, is actually quite brilliant for a handful of reasons.

Levi's Secondhand checks off a lot of boxes

Like all for-profit corporations, this one's had to adapt. Consumers are prioritizing -- and rewarding -- good stewardship of the planet's resources. Some shoppers make a point of patronizing businesses that operate responsibly. These shifts in cultural norms have particularly put the fashion industry in the hot seat, since it alone accounts for around one-tenth of the world's annual carbon emissions, and its pollution output is expected to grow before it contracts.

One simple step in the other direction is reusing wearable clothing rather than throwing it away. Thrift stores and consignment shops already do this, while venues like ThredUp and The RealReal bring a sense of fashion and organization to the effort. More recently, conventional retailers such as Walmart and Macy's have partnered with major secondhand resale players.

Levi, however, is one of the first apparel brands to embrace the idea itself, and it's doing so in a unique fashion. 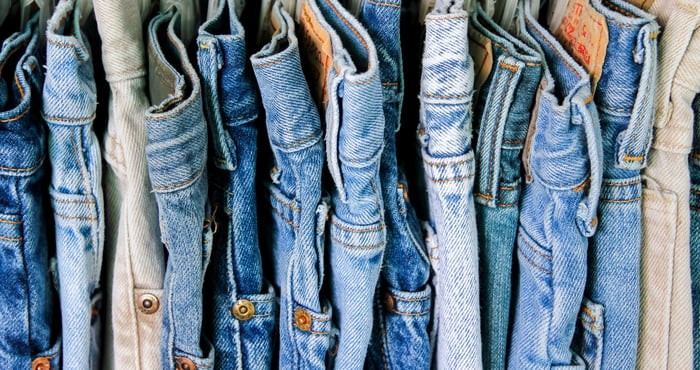 In October, the company unveiled its latest innovation -- Levi's Secondhand. Under this program, consumers can bring an unneeded pair of denim jeans or a jacket to a participating Levi's store and exchange them for credit toward the purchase of a new Levi's item. Those used garments are then washed and refurbished as needed, then sold online by the company to anyone looking for more broken-in duds.

There are a couple of fairly obvious upsides to the initiative but a couple more that aren't quite as clear.

Perhaps among the most obvious benefits Levi Strauss will enjoy thanks to the new secondhand shop is foot traffic funneled into its brick-and-mortar locations. There's no way of forecasting exactly how much, but with the number of new jeans made worldwide numbering in the billions every year -- hundreds of millions in the U.S. alone -- and with Levi's being one of the planet's most popular brands, there is a large opportunity to drive these trade-ins.

If you don't think consumers are serious about supporting the environment, think again. An Accenture study posted late last year suggested almost half of all consumers would consider giving used clothing as a gift, while more than half suggested they'd be fine with receiving secondhand garments as a gift. The same report also said about half of all consumers considered a retailer's environmental impact when making purchasing decisions.

In the same vein, ThredUp's 2020 outlook for the used clothing resale market indicates 44% of consumers plan to spend more on secondhand clothing within the next twelve months. That planned increase in expenditures outpaced any other category, including department stores, off-price retailers, and even Amazon. By 2029, consumers collectively say 17% of their wardrobes will consist of secondhand purchases. That's second only to off-price purchases, which are expected to account for 19% of peoples' wardrobes.

3. Going to where the growth is

That's not all ThredUp's recent study suggests. The resellers of used but still marketable apparel say that the dedicated resale and secondhand clothing markets will likely grow by more than 400% between 2019 and 2024. That's much stronger than traditional thrift stores' projected sales growth of 34%, and the projection trounces the 4% contraction the entire apparel retail market is expected to suffer during that time. By 2029, the secondhand apparel market is expected to be bigger than both the thrift store market and the so-called fast-fashion market that arguably drew attention to the fact the fashion world is one of the planet's most pollutive industries. ThredUp estimates resale volume will hit $44 billion in the next decade.

Though it's the most obscure upside of Levi's Secondhand, it may also be the most powerful. This initiative bolsters the company's ability to gather consumer data and then build a digital customer ecosystem out if it.

Levi already sells its goods online, and it's a solid enough e-commerce platform. The company just reported a third-quarter top line of $1.1 billion that was down 27% year over year as a result of COVID-related shutdowns. But digital sales were up 50%, accounting for about one-fourth of its revenue for the quarter in question. With the advent of Secondhand, however, the company can really drill down into a consumer's habits, preferences, and shopping frequency (outside of what it's already able to gather online and through stores) and build a truly robust omnichannel operation.

It's never been more important. CEO Chip Bergh conceded a quarter earlier that the opening months of the pandemic forced Levi into a "digital transformation" that facilitates artificial intelligence-enabled e-commerce promotions in an environment where consumers continue to steer clear of brick-and-mortar stores. More data makes the AI-powered sales effort more effective.

Investors expecting immediate and clear-cut growth from Levi's Secondhand need not hold their breath. ThredUp's resale market outlook is encouraging, but it's measured in years. It will be tough to specifically attribute near-term growth to the program, and it's a slow roll anyway.

There's little doubt as to the underlying opportunity of resale, though. Levi just took control of its sliver of the secondhand market, integrating it with the conventional pieces of its business. This closed-loop approach is a smart one, even if the company only collects a fraction of the jeans it has already sold.