AT&T is dumping its DSL in rural areas, opening up an opportunity for T-Mobile's 5G LTE.

Many investors know we're at the beginning of the 5G era. 5G wireless technology has been hyped as the next big thing, with lightning-fast speeds and low latency enabling next-generation applications we can't even think of yet.

Another potential use for 5G that's more immediate and quantifiable? Replacing your broadband connection. Yet while the limits of 5G technology probably wouldn't work in the crowded city today, 5G broadband may soon be making its way to the country.

Last week, T-Mobile (TMUS 0.40%) announced that it will be taking its home LTE broadband project and accelerating it in a big way across the United States. And it could come at AT&T's (T -0.89%) expense. 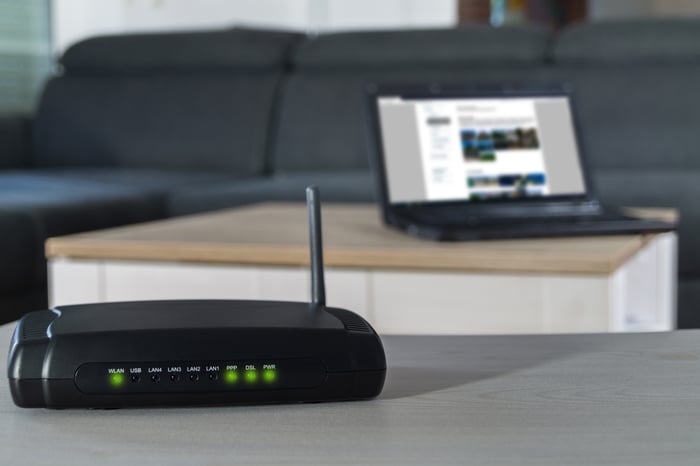 With its usual combative flair, T-Mobile said in a Thursday press release:

T-Mobile is throwing a lifeline to many communities being abandoned by AT&T. It's expanding its $50/month, no two-year contract Home Internet service into more than 450 cities and towns that AT&T is deserting. The Un-carrier is also opening the service to non-T-Mobile customers in these new areas.

To clarify, AT&T isn't exactly "abandoning" communities, though it is planning to discontinue its old-technology DSL service in rural areas as of Oct. 1. AT&T didn't cut customers off on the 1st; it's allowing current DSL customers to continue service for as long as they remain in their homes. However, AT&T will stop serving those homes once the current residents leave. AT&T is attempting to transition to its next-gen high-speed fiber connections, but many rural areas don't have fiber access, because of the financial difficulties of reaching those communities.

Some of these old-school DSL connections don't even reach 6 Mbps, which is lower than the minimum 25 Mbps the Federal Communications Commission has mandated. So it's not as if these were super-high-quality connections anyway, and these DSL connections amounted to only 653,000 customers last quarter, compared with 14.48 million on AT&T's fiber or hybrid-fiber offerings.

Still, those 653,000 customers, along with their neighbors, could be an opportunity for T-Mobile. Once new residents move in or current residents decide to switch, they'll need a different broadband provider, and less than 5% of AT&T's rural DSL customers have access to AT&T's fiber broadband.

T-Mobile had already been piloting its home LTE broadband in select rural counties on its old LTE network for over a year now. Yet following the April 1 acquisition of Sprint and its mid-band 2.5Ghz spectrum, T-Mobile has the opportunity to improve those speeds and expand coverage. T-Mobile is now targeting rural communities that are predominantly served by older technology like DSL, which T-Mobile believes could be a 20 million-household opportunity across 450 cities and towns.

T-Mobile expects that it will be able to offer 100 Mbps broadband connections to over half of American ZIP codes by 2024. That could definitely pose a big threat to any company that currently offers broadband to rural and suburban communities. Of course, T-Mobile's speeds today are likely well below that, but when the competition from older DSL is only 6 Mbps, it's not a very high bar to clear to start grabbing customers.

The current T-Mobile product is $50 a month with auto-pay, with all taxes and fees included and no data caps. That's about $20 to $30 below what most providers offer for standalone broadband. T-Mobile also noted that its LTE broadband pilot received an NPS score of 42 -- that's pretty good, considering big cable has NPS scores in negative territory!

Another win for T-Mobile and a loss for AT&T

As has been the case for much of this year and really the last decade, T-Mobile is gaining momentum in the wireless communications industry, and it could be accelerated in the 5G era. The company just overtook AT&T as the nation's second largest wireless provider, and it's pressing ahead with its industry-leading 5G spectrum portfolio.

Meanwhile, any potential upside from the new broadband initiative doesn't appear to be reflected in T-Mobile's stock price yet. That means if this mobile broadband rollout to rural communities is successful, there could be even more upside in T-Mobile's shares.

Why These Big-Time Investors Own T-Mobile
376%