AT&T (T -1.42%) is a very popular stock among retirees and income investors. As one of the three biggest mobile wireless carriers in the country, the company has traditionally enjoyed a large, profitable, and recurring revenue base from "sticky" phone plans. Many thus consider it to be a safe-haven stock.

That reach for growth is looking questionable these days, as challenges in both the core AT&T wireless business as well as those debt-fueled acquisitions could jeopardize the company's 7.25% dividend. So could this retiree favorite eventually cut its payout? 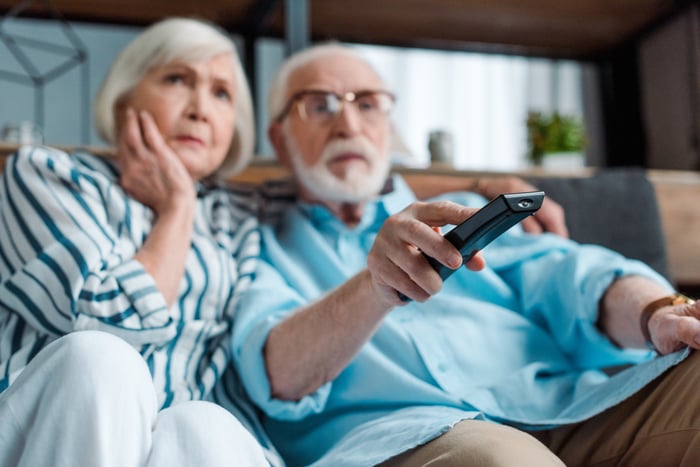 Recently, KeyBanc analyst Brandon Nispel downgraded AT&T to an underweight rating, meaning that investors should reduce their holding. Nispel also gave the company a price target of $25, below the current share price around $29. Nispel believes that current macroeconomic pressures will spur even more cord-cutting, hitting satellite-based DIRECTV especially hard, while AT&T's attempt at over-the-top (OTT) streaming bundles AT&T TV and AT&T Now won't be enough to make up for those losses.

Even beyond the well-known troubles in pay TV, Nispel believes that AT&T's core wireless business is challenged as well, with consumers trading down to less expensive wireless plans amid financial pressure.

These near-term headwinds are unlikely in themselves to cause a dividend cut, but each reflects longer-term issues that impact every single one of AT&T's business lines.

AT&T's longer-term problems are much deeper than these near-term blips. First, the DIRECTV purchase is looking like a big mistake. The pricy purchase almost coincided perfectly with a peak in pay TV in 2014. Since then, the number of U.S. pay TV households has fallen from 100.5 million to roughly 83 million today, with a projected drop to 72.7 million by 2023. DIRECTV households often don't get their internet through the same provider. While AT&T was able to grow its fiber-based broadband connections last quarter, those numbers are far below its video footprint and far below other broadband leaders.

In fact, AT&T has reportedly been shopping the DIRECTV business around.  However, apparently the largest offer for the unit was only around $15.75 billion, according to the New York Post. That's a far cry from the $49 billion the company paid for it five years ago. Incredibly, AT&T is still pushing ahead for the auction, showing how desperately it wants to get rid of the unit.

HBO Max is in a crowded field

Meanwhile, the purchase of Time Warner is also looking questionable, with its various cable networks feeling the pinch from cord-cutting, and HBO potentially losing some of its differentiation compared with other premium OTT networks.

At $14.99 per month, the new all-inclusive HBO Max is the highest-priced streaming video-on-demand service, and it's unclear if it will be able to grow much in an increasingly competitive environment.

With both legacy media conglomerates and large tech companies rolling out their own premium video bundles, one fear among media investors is that cash-strapped consumers may subscribe to a service for a month, watch specific shows, and then cancel to try out another service the next month.

That's not a problem exclusive to HBO Max, but it could still affect subscriber numbers in the medium-term. While HBO said that traditional HBO and HBO Max subs combined were up 5% for the first half of 2020, that's not entirely impressive, since the world was in quarantine for much of the first half of the year and consumers benefited from stimulus payments.

Now, with no stimulus package coming and the potential for a vaccine in the coming months, how much HBO will be able to grow is an open question. 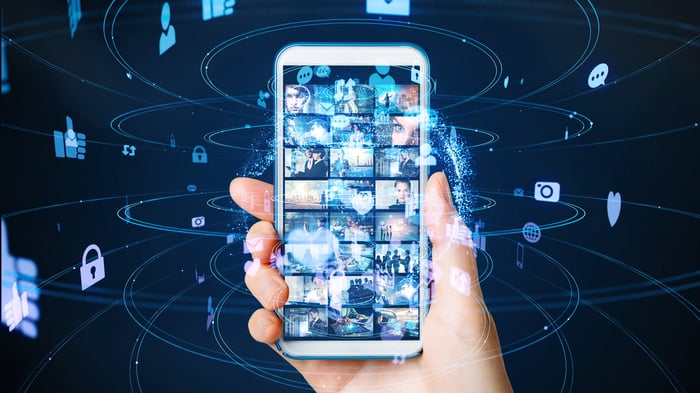 The big threat in 5G

However, the biggest threat for AT&T is potentially increased competition in AT&T's core wireless business. While AT&T has long touted its network as one of the two best in 4G, the recent merger between T-Mobile (TMUS -1.17%) and Sprint has the potential to make wireless even more competitive as the industry transitions to 5G.

In fact, the "new" T-Mobile just surpassed AT&T as the nation's second-largest wireless provider. T-Mobile aims to beat both AT&T and Verizon to a superior 5G network while also offering its traditional lower prices. In other words, the transition to 5G could be a disruptive threat to what investors had thought was a safe and unexciting annuity-like core business for AT&T.

Last quarter, every single one of AT&T's business lines fell, including the core mobility segment. The all-important postpaid phone subscriber count fell 0.7%. Even though connected devices and prepaid customers grew, allowing the company to say it had gained mobility subscribers overall, overall mobility service revenues were down 1.1%.

You can't buy and forget AT&T

AT&T could still turn things around. After all, the idea behind the DIRECTV and Time Warner acquisitions was to be able to bundle offerings across mobility, internet, and content. The company still may be able to do it successfully, but it will need to innovate.

AT&T is planning to invest another $4 billion in HBO Max over the next three years, with a goal of reaching 50 million to 55 million subscriptions by 2025. If that happens, it could be good news for the WarnerMedia division and help offset losses in DIRECTV.

Meanwhile, it's not a certainty that AT&T will lose out in 5G. T-Mobile currently has the widest 5G coverage and Verizon has the highest speeds, with AT&T somewhere in between the two. The company just announced that it had reached nationwide 5G availability earlier this summer, and there is another wireless spectrum auction coming up in December. It's still early in the 5G race, so nothing is settled as of yet.

AT&T's net income didn't match its dividend payment for the first half of the year, which is concerning. While free cash flow covered the dividend handily, AT&T has been spending less on capital expenditures than its depreciation charges over the past couple of years. That could mean it's underspending on some things that might improve its competitive position amid all these threats.

AT&T is not a "safe" dividend stock. It's being assaulted by very strong competitors like Netflix (NFLX -2.44%) in media and T-Mobile in wireless, and its high dividend and debt load are both burdens these competitors don't have.

I own some AT&T stock, but it's a tiny position in my portfolio, and part of a basket of what I'd consider high-risk, high-yield dividend stocks. I'm also thinking of selling it altogether.

Retirees with a large position in AT&T under the presumption it's a safe haven stock should probably consider diversifying their portfolios away from the telecom giant. At the very least, investors should monitor the company closely to see if its new offerings in 5G and streaming catch on enough to offset declines in its legacy businesses. If they don't, a dividend cut some years out is still a possibility.