Five times in a row, Boeing's (NYSE:BA) and Lockheed Martin's (NYSE:LMT) rocket-launching joint-venture United Launch Alliance has had to abort planned launches of a Boeing-designed Delta IV heavy lift rocket. ULA initially planned to launch the rocket from Launch Complex-37B (LC-37B) at Cape Canaveral, carrying a spy satellite payload dubbed "NROL-44," back in June 2020. A series of technical glitches and weather delays, however, have kept the rocket grounded.

So what exactly is the problem here? 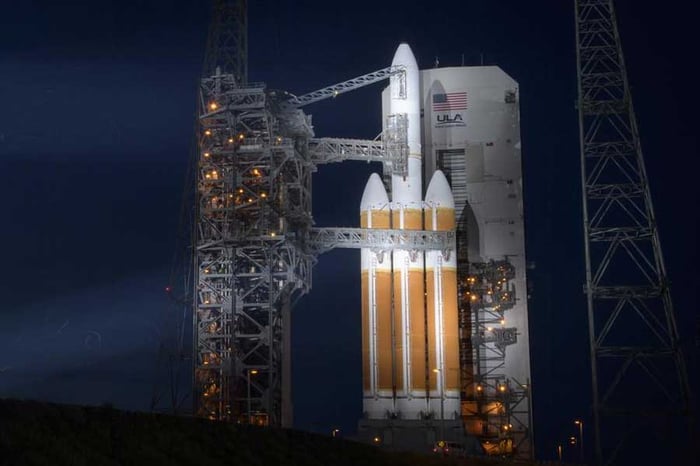 NROL-44 on its launch pad. Will it ever leave? Image source: Kennedy Space Center.

Not so much the rocket as the launch pad

The good news for Boeing fans is that there's nothing wrong with its Delta rocket design per se -- the contrary is more like it. Since Boeing designed it in 1960, 385 Deltas have launched successfully, including nearly a dozen Delta IV Heavy rockets. Rather, reports Ars Technica, the problem is with the "aging infrastructure" of LC-37B, which has been launching Delta IVs since 2002.

Four of NROL-44's five failed launch attempts have in fact been caused by "technical problem[s]" with the rocket's launch pad. One launch was scrubbed because of a failed "ground systems regulator," and another for a "pad side stuck regulator" and "torn diaphragm," which ULA CEO Tory Bruno admitted "can occur over time."

Then there were problems "with the launch pad's swing arm retraction system" and, of course, inclement weather. The fifth and most recent attempt, on Sept. 30, got scrubbed when "a sensor reported a fault" just seven seconds before launch.

And now, with mechanical problems continuing to crop up, ULA has changed the date of its next attempt to "indefinite," pending a "test and [evaluation of the launch pad's] swing arm retraction system."

Delta IV is going away

Ars notes a few big-picture issues behind the series of nagging little glitches that have kept the NROL-44 grounded. Wear and tear on the launch pad is one. The infrequency of ULA launches from the launch complex is another.

On average, ULA has only launched about one Delta IV rocket per year for the past four years. And with the launch complex sitting dormant for 364 days a year, there aren't a lot of opportunities to put it through its paces and detect (and fix) launch-canceling glitches before they happen.

Industrial companies like ULA are capital-intensive businesses, and are expected to spend a lot of money maintaining their infrastructure. But from a financial perspective, ULA doesn't have a lot of incentive to put a lot of effort into upgrading LC-37B. The company has already retired its basic Boeing Delta IV rocket. It only plans to launch three more triple-core Delta IV Heavies (including NROL-44) from LC-37B before that rocket gets retired as well. With the Delta IV's curtain call so near, ULA is said to be focusing on getting nearby LC-41 ready to launch the new Vulcan-Centaur rockets that will replace Delta IV, rather than on keeping LC-37B in tip-top shape.

What it means for Boeing investors

But here's the thing: One of ULA's strongest arguments when bidding for U.S. government contracts has always been its technical prowess, and its record of launching 140 straight rockets in a row, without a single failure. (In fact, CEO Bruno emphasizes this point, tweeting out a triple-digit update after each successful launch):

Now, it's certainly understandable that ULA might not want to sink too much more money into a depreciating asset like LC-37B, which is sure to become obsolete in a few years. But the more glitches ULA allows to happen, the greater the risk that one of these glitches causes a serious problem with a launch -- an "anomaly" -- ruining ULA's record right before its newest rocket family begins service.

Even if ULA avoids such an out-and-out disaster, Ars notes that the company's frequent launch scrubs "frustrate other range users." Granted, "scrubs" are endemic to this business. Every company suffers them from time to time. But ULA's continual delays may be hurting its reputation with other rocket companies, and with NASA itself. After all, every launch window that ULA claims for itself -- whether it uses it or not -- is a launch window denied to another rocket company.

When you consider that ULA already can't compete with rivals such as SpaceX on price, reputation is really ULA's most valuable asset at this point. Maintaining its reputation for quality and on-time performance is therefore essential to keeping government contract money flowing to the company's owners, Boeing and Lockheed. The more ULA's reputation erodes, the greater the risk to Boeing's and Lockheed's space businesses -- and profits -- going forward.