SpaceX, the pioneering rocket launch company founded by Elon Musk, famously advertises a launch cost of just $62 million for its Falcon 9 rocket -- a price it has held steady for four and a half years. Of course, for nearly as long, SpaceX has also been saying that a switch to reusable rockets would permit the company to cut its prices even further -- as much as 30%.

So four and a half years since the $62 million price tag was introduced, how much cheaper have SpaceX rocket launches become? Thanks to a series of contract modifications just announced by the U.S. Space Force, we finally know. 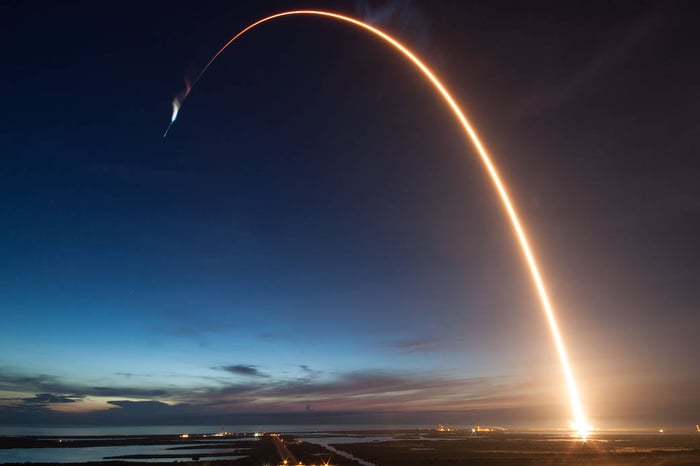 Rocket launches for half the price

Last week, Space Force announced that it will permit SpaceX to fly reused (or as SpaceX prefers, "flight-proven") Falcon 9 rockets to launch the government's next two government GPS III satellites. The government had previously insisted that such "national security" satellites be launched aboard brand new rockets, but SpaceX has successfully re-flown used rockets for other customers 38 times now.

It seems that that's enough to have finally convinced Space Force that this is a safe way to get to orbit -- and cheaper, to boot.

How much cheaper? Initially, SpaceX had agreed to launch these government GPS satellites for about $97 million each. But in return for being permitted to fly reusable rockets, SpaceX now says it can cut the price it charges Space Force for the next two launches by a total of $52.7 million -- a savings of more than $26 million each -- as BreakingDefense.com reported last week.

Now, because complying with government regulations adds costs on top of SpaceX's usual advertised prices, Space Force will still end up paying more than $70 million apiece for these specific launches. But introducing reusability cuts all launch costs by the same amount it cuts government launch costs. If this is true, then "flight-proven" rockets could reduce the cost of an ordinary launch to as little as $36 million.

That's even cheaper than the 30% cost reduction that SpaceX initially promised four years ago. In fact, it works out to a cost reduction of more than 40%.

What it means for SpaceX -- and for everyone else

Space Force has already committed to awarding 60% of its national security launch contracts to SpaceX archrival United Launch Alliance (ULA) over the period from 2022 to 2027, with SpaceX receiving only 40% of the contracts. This award, announced two months ago, offers ULA some assurance that it won't be immediately "priced out" of the space launch market by SpaceX's low prices -- good news for Boeing (NYSE:BA) and Lockheed Martin (NYSE:LMT), ULA's joint owners.

Post-2027, however, things could get difficult for Boeing and Lockheed, which face the prospect of either losing Space Force contracts to SpaceX entirely, or cutting their own prices to match SpaceX prices and sacrificing their profit margins as a result. (This could prove especially problematic for Boeing. According to the latest data from S&P Global Market Intelligence, Boeing's Defense, Space & Security business is currently the only Boeing business earning a profit.)

In the commercial space launch industry, SpaceX's advantages could become even clearer. Unlike the U.S. government, commercial businesses have no vested interest in paying one provider more than another just to ensure there are multiple providers available to put essential payloads into orbit.

If SpaceX can launch commercial payloads for a mere $36 million, I honestly don't see how ULA can compete with that -- unless its new Vulcan Centaur rockets prove dramatically cheaper than the Atlas V and Delta IV [Editor's note: Name updated.] rockets it has been flying up to now. For that matter, even foreign rocket launchers such as Russia's Roscosmos and India's PSLV may struggle to compete.

$36 million is more expensive than the reported $15 million cost of an expendable Indian PSLV rocket, which is probably the cheapest launch vehicle this side of China. PSLV, however, only has a payload capacity of about 1.8 metric tons to Low Earth Orbit -- less than a tenth of the Falcon 9's 22.8 ton payload. Pound for pound, therefore, it would appear there is no one on Earth capable of launching payloads to orbit cheaper than SpaceX.

Thanks to its reusable rockets, the global commercial satellite launch market may now be SpaceX's for the taking.