Please ensure Javascript is enabled for purposes of website accessibility
Log In Help Join The Motley Fool
Free Article Join Over 1 Million Premium Members And Get More In-Depth Stock Guidance and Research
By Rich Smith - May 28, 2016 at 10:13AM

Price is what you pay. Value is what SpaceX's customers will get.

In case you haven't heard, SpaceX has a reusable rocket.

SpaceX rockets go up, then they come back down -- intact. IMAGE SOURCE: SPACEX.

In case you also haven't heard, SpaceX expects to give customers a 30% price break for flying on a reused rocket.

Of course, you probably actually have already heard about these things. (This company makes news practically every week, and it gets a lot of coverage.) But here's something truly new, and something I'm going to bet you have not heard yet: SpaceX is raising its prices.

That sounds like it must be a typo, coming so soon after Elon Musk publicly proclaimed that developing reusable rockets would eventually yield "a hundred-fold cost reduction in marginal costs." But Musk was talking about the cost to SpaceX.

The cost to SpaceX's customers, on the other hand, moves up and down independent of what it costs SpaceX to provide its satellite-launching service. And while management says the cost will come down "30%" eventually, right now, the price is going up.

Up by how much, you ask? Admittedly, not by a lot. When last we checked in on SpaceX's launch prices, a ride on the company's Falcon 9 rocket was advertised at $61.2 million: The latest edition of that price list, however, shows SpaceX rounding up that number to $62 million: The angel's in the details

Is SpaceX gouging its customers? Is it raising prices just to increase profits? Actually, neither. If you work the math, SpaceX's $800,000 price hike on the Falcon 9 amounts to only a 1.3% increase in launch price. What's more, it's worth every penny.

To see why, take a closer look at those two versions of SpaceX's price list. (Focus on the rockets on the left. SpaceX hasn't changed the price on its new Falcon Heavy rocket, which has yet to fly.)

What's more, for customers who need more oomph in their rockets, the company has lifted the upper range on how much cargo it can conceivably deliver to orbit. Previously, 4.85 metric tons was the max Falcon 9 could lift. Now, SpaceX says its Falcon 9 can take as much as 8.3 metric tons of cargo to GTO -- or 22.8 mT to low earth orbit. (SpaceX would presumably charge more for the extra oomph, however.)

To put those numbers in context, the base version of the Atlas V rocket operated by United Launch Alliance -- the joint venture between Boeing (BA 5.64%) and Lockheed Martin (LMT 2.05%), and SpaceX's archrival -- is rated for 4.75 metric tons of payload, which is now less than what Falcon 9 offers. Thus, Boeing and Lockheed Martin charge about 100% more money to put 14% less payload in space, which puts them at a competitive disadvantage to SpaceX in bidding on commercial space work. (The biggest version of Atlas V, the 551 version utilizing five rocket boosters, still offers more lift than the base Falcon 9 -- but the Falcon Heavy will soon trump it, and still cost less.)

SpaceX attributes the improved capability of Falcon 9 to the results of new tests that show the engine to be performing above spec, now that it's using "super-chilled" liquid oxygen for its propellant. Supercooling makes the fuel denser, improves the rocket's performance, and most important, allows SpaceX to pack more fuel on board the rocket. That permits SpaceX to carry larger loads into orbit, leaves extra fuel for relanding the first stage -- or both.

The fact that SpaceX is adding all this capability, yet moving the needle on pricing so minimally, preserves SpaceX's price advantage over similar rockets from Boeing and Lockheed Martin -- and, I suspect, hastens the day when SpaceX will be the only game in town.

So far, we've focused solely on the changes in pricing, and satellite-lift capability, detailed in SpaceX's revised price list. But that's not all SpaceX had to tell its customers, and investors, this month. Tune in tomorrow, when we reveal the most shocking detail of all. 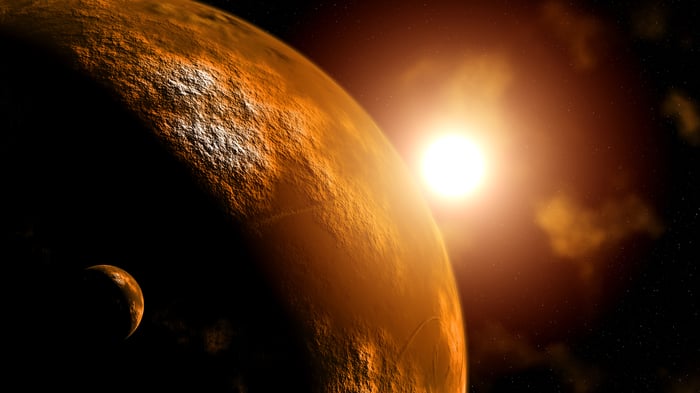 What's next for SpaceX? Here's a hint.