In the beginning, there was SpaceX -- the space launch start-up founded by billionaire Tesla Motors CEO Elon Musk.

Grasshopper: The rocket ship that started it all. Image source: SpaceX.

In 2012, SpaceX pioneered the use of reusable rockets for space exploration when its Grasshopper experimental rocket made a brief hop a few feet into the air, then resettled on its landing pad. What followed was a series of eight successful test flights, increasing steadily in both altitude and complexity of landing, between 2012 and 2013. Ultimately, SpaceX decided to roll the dice, retire Grasshopper, and attempt landing one of its actual Falcon 9 first-stage boosters (fitted with Grasshopper tech), on a drone barge at sea.

That didn't go so well.

Oops. Close, but no cigar. SpaceX via Vine.

But SpaceX didn't give up. In successive landing attempts, SpaceX got closer and closer to its goal of landing a rocket ship... on its tail... at sea... on a wave-tossed boat -- and getting it to stay upright rather than topple over and explode. Before they got the last kink worked out, though, Blue Origin upped the ante.

Enter Blue Origin
Blue Origin, set up by fellow billionaire tech CEO Jeff Bezos in West Texas, stole SpaceX's thunder in November last year. While Elon Musk was busy trying to shoot rocket ships into orbit and then land them on boats, Bezos took the easier route of launching its New Shepard rocket on a suborbital flight and then landing it back on dry land.

NEW SHEPARD RETURNS TO EARTH IN A CLOUD OF DUST.BLUE ORIGIN.

And in the process, it set off a real race to space.

Point proved
Seemingly irked by Bezos' success in landing a rocket on dry land, Musk set out to prove the success wasn't quite as big a deal -- and the victory over SpaceX not as significant -- as Bezos and Blue Origin had boasted.  On Dec. 21, less than a month after Blue Origin's success, SpaceX sent one of its own Falcon 9 rockets into space, then landed it successfully at its new "Landing Zone 1" spaceport.

Thinking his point proved, Musk tucked away his first successfully relanded Falcon 9 in his trophy room, and then went right back to his original project. He tried to land another Falcon 9 on his drone barge. (It crashed, the victim of a weak third leg.)

Not so fast, Tex
But Bezos was not so easily fended off. Casting about for another "first" box he could tick, before Musk got around to it, Bezos took note of the trophied Falcon 9, and apparently thought to himself, "Aha!" Quick like a bunny, Blue Origin got New Shepard tuned up, refueled -- and relaunched it. Then relanded it.

Where we are now
Which brings us to today. And as things stand, a pattern is emerging in this race to "reusable space." First, SpaceX does something. Then, Blue Origin does something slightly different. Both companies declare victory, while privately planning to one-up whatever their competitor just did -- and Boeing (NYSE:BA) and Lockheed Martin (NYSE:LMT) sit grumbling on the sidelines.

The future's uncertain, but the end for Boeing and Lockheed looks near
Does all of this seem a bit fantastical? Perhaps so. But no more fantastical than what happened a couple of months ago, when we all watched SpaceX set down Falcon 9 at Landing Zone 1, live-streamed over the Internet. And we do know that over the next few years, SpaceX already has no fewer than 46 separate missions lined up for its fleet of Falcon 9 and Falcon Heavy rockets to perform -- any or all of which could include attempts to land various parts of the rocket back on Earth (or sea). Meanwhile, Blue Origin has plans to conduct "full-engine testing" of its new BE-4 rocket engine, and to both launch and land the New Shepard rocket "again and again."

So whatever the list of "firsts" looks like in the months and years to come, one thing seems certain: SpaceX and Blue Origin will be the companies making all these firsts. NASA may still view space as its bailiwick, but it's been 40 years since they put a man on the Moon. By the same token, Boeing and Lockheed Martin may be very good at winning contracts from NASA. But when it comes to innovation, their plan to parachute spent rockets back toward Earth, then grab them midair by their ponytails and land them with a helicopter, seems lacking in the originality department.

This race is going to the swift -- and neck-and-neck, by leaps and bounds, SpaceX and Blue Origin are the companies winning it. Now if only we could figure out a way to invest in them. 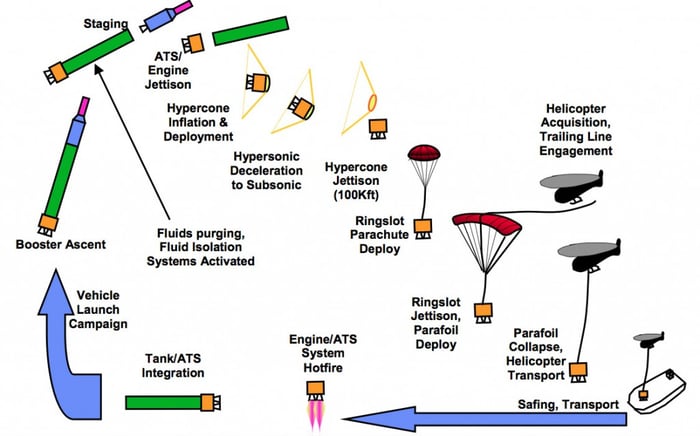 Seriously? This is the best "reusability" plan ULA can come up with? Boeing and Lockheed Martin's plan to float rockets back to Earth on parachutes, and snag them with helicopters. Image source: United Launch Alliance.