Please ensure Javascript is enabled for purposes of website accessibility
Log In Help Join The Motley Fool
Free Article Join Over 1 Million Premium Members And Get More In-Depth Stock Guidance and Research
By Rich Smith - Mar 21, 2018 at 6:03AM

Bigger is still better, at least when it comes to rockets.

"Boeing and Lockheed Martin have their work cut out for them. Unless they're willing to operate ULA at a loss, they simply cannot compete with SpaceX on cost, for government launch missions, over the next two years."

This was my prediction one year ago: For the foreseeable future, Boeing (BA 3.52%) and Lockheed Martin (LMT 0.57%) would basically be shut out of the American government space launch business. Years would pass, and Boeing and Lockheed would lose contract after contract to newly certified rival SpaceX, which was bidding as low as $83 million per launch to lift the U.S. Air Force satellites into orbit -- satellites that Boeing and Lockheed joint venture United Launch Alliance (ULA) has been charging $164 million and up to launch. 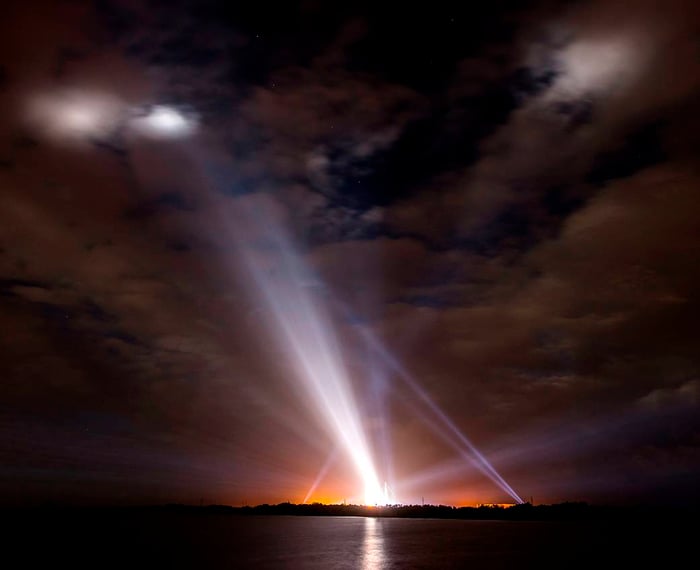 In fact, I was wrong about several things, but first and foremost about the price the Pentagon was willing to pay to keep two launch providers alive and bidding for its business.

Two years ago, the U.S. Air Force was hoping that permitting SpaceX to compete with ULA for military launch contracts might help drive ULA's launch costs down to the $140 million range. Instead, the Air Force just awarded ULA a pair of launch contracts, dubbed Geosynchronous Space Situational Awareness Program 8 (AFSPC-8) and AFSPC-12, for nearly $355 million in total.

AFSPC-8 will put two Geosynchronous Space Situational Awareness Program satellites, GSSAP-5 and 6, into orbit to track the movements of other satellites in geostationary orbit 22,000 miles above the equator. AFSPC-12 will send up the Wide Field of View Testbed (an experimental missile-warning satellite) and a "propulsive EELV Secondary Payload Adapter." Both launches are scheduled to take place in early 2020.

Now contrast that with the other big space contract announced last week: $290.6 million for SpaceX to launch three four-ton GPS III satellites. At roughly $96.9 million per launch, that's up a bit from last year's SpaceX GPS launch contract (awarded for $96.5 million), and it's 17% more than the $82.7 million that SpaceX bid to launch its very first GPS satellite in 2016. But per launch, SpaceX is still earning barely half what the Air Force is paying ULA.

Price isn't the only object

Competition is probably one reason. Were the Air Force to award launch contracts based solely on price, SpaceX's significantly cheaper launch costs would quickly force ULA out of contention -- and perhaps out of business. This, however, would put the Air Force back in the position it was in before SpaceX came on the scene: Stuck with a sole-source provider able to essentially dictate pricing to the government.

There's also reliability to consider. To date, United Launch Alliance has launched 126 rockets into orbit successfully -- in a row. In contrast, SpaceX suffered launch anomalies in both 2015 and 2016. So far, the longest SpaceX has gone without a launch mishap is fewer than two dozen missions, leaving it more than 100 launches away from beating ULA's streak. While some might argue that ULA is overcharging for the "guaranteed success," its winning streak justifies building at least some premium into its pricing.

Finally, for the time being at least, the Air Force simply has to choose ULA -- at least for some missions. ULA's Delta IV Heavy rocket can lift 14 tons into geosynchronous transfer orbit, or nearly twice the capacity of SpaceX's Falcon 9. As Air Force Space and Missile Systems Center Launch Enterprise Director Claire Leon explained last year, only SpaceX's new Falcon Heavy launch vehicle is big enough to bid against the Delta IV Heavy on some of the government's larger launch missions -- presumably including the multi-large-satellite "AFSPC" contracts that ULA just won.

To successfully bid on those, Falcon Heavy "would need to be certified by the time that we awarded the contract," says Leon. And for that to happen, the Air Force "would want to see three" successful Falcon Heavy flights.

Last year, the Air Force put an "AFSPC-52" mission up for bid. Its cargo is "classified," but assuming it's as massive as the AFSPC contracts that ULA was awarded last week, that probably means only ULA can win it.

Then, in January of this year, the Air Force released a Request for Proposals for another batch of five satellite launches: Space-Based Infrared System Geosynchronous Earth Orbit-5, AFSPC-44, National Reconnaissance Office Launches -85 and -87, and the even more hush-hush "SILENT BARKER," also for NRO. SpaceNews.com notes that there's also an "NROL-107" mission up for grabs, and potentially another GPS 3 launch available.

Not all of these launches will involve payloads small enough for SpaceX to handle. And the sooner these contracts are awarded, the better ULA's chances of winning at least some of them.