That's more than just bragging rights. It could mean a monopoly on large space launches.

SpaceX made history on Tuesday. (I know. Yawn. Again?)

Launching the world's biggest rocketship since the Saturn V "Moon Rocket," and launching from the historic LC-39A launchpad at NASA's Kennedy Space Center in Cape Canaveral, Florida (the same launchpad used by the Apollo 11 mission), SpaceX became the first privately held company to launch a payload past Mars.

And the first company to send a car into space.

And the first company to land two rocket boosters, simultaneously, after launch. 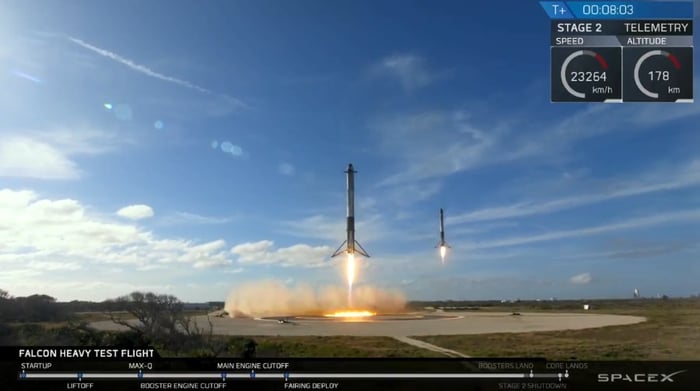 SpaceX also reaffirmed its title as the only company to ever wreck a rocket core by trying to land it on a floating barge at sea -- and missing. (But SpaceX isn't playing up that point.)

How it went down

You can watch the entire maiden flight of SpaceX's Falcon Heavy (FH) rocket on its website for yourself. But here's a quick rundown of what happened on Tuesday. Roughly one minute after launching from KSC at 3:35 PM EST, FH broke the sound barrier and reached "Max-Q" on its flight. A minute and a half later, FH's two rocket boosters detached and proceeded to descend to Earth, firing retrorockets and landing safely back at the Cape.

30 seconds later, the main engine cut off, and FH's core descended to make its own ill-fated landing attempt in the Atlantic. FH's second stage kicked in, and its payload fairing separated, revealing the payload: Elon Musk's cherry red Tesla Roadster, with a dummy "Starman" in the driver's seat and the words "Don't Panic!" emblazoned on the dash display.

At last report, that car was still en route far out into the solar system, with a projected apohelion (its farthest point before the Sun's gravity starts dragging it back) of 2.61 astronomical units from the Sun -- well within the Asteroid Belt between Mars and Jupiter. The car will occupy this orbit, says Elon Musk, for the next billion years or so. There's a lot to unpack as a result of Falcon Heavy's launch, and don't worry -- we'll explore all aspects of it in the coming days. For now though, let's focus on just the (literal) biggest point:

On its first test flight, SpaceX demonstrated that it now has the world's biggest rocketship -- not just by size, but by capability. As sketched out in a graphic  on the company's website, FH's payload to Low Earth Orbit (LEO) was 140,660 lbs -- 70 tons, give or take. That's roughly three times the payload of the Delta IV Heavy, the biggest rocket produced by Boeing (BA 3.00%) and Lockheed Martin's (LMT 0.18%) United Launch Alliance (ULA). It's nearly four times the payload of Boeing and Lockheed's workhorse Atlas V 551, and more than Russia's Proton M rocket, China's LM3B, or Airbus's (EADSY 2.43%) Ariane 5 can carry as well.

This fact should make SpaceX the default choice for any satellite operator, space station builder, or asteroid miner that needs to launch anything truly massive into space. All the more so given that SpaceX is quoting a $90 million price tag on its Falcon Heavy launches, which is less than what Boeing and Lockheed charge for launches on their now-less-capable Delta IV and Atlas V launches. (And SpaceX's prices could come down even further -- the price quoted on the company's "Capabilities" page does not include any discounts for launches utilizing re-used rockets.)

Space operations, while small as a proportion of Boeing's, Lockheed's, and Airbus's overall businesses, are incredibly lucrative for all of these companies, with ULA for example earning as much as $400 million in a typical year. But already, we've seen competition from SpaceX driving down prices in space launch -- and this was when SpaceX was competing solely on price, and unable to compete for the very largest space launches, which only Boeing and Lockheed's Delta IV Heavy could handle. Now that SpaceX can not only compete in this ultra-large segment -- but dominate it -- it's all but certain we'll see space profits from the world's incumbent launchers squeezed even further.

Granted, Falcon Heavy's "world's most powerful rocket" title could go up for grabs in a few years if Boeing, Lockheed, and their partners ever finish building NASA's new Space Launch System (SLS). But even then, at an estimated cost of $1 billion per launch, it's debatable whether SLS's capabilities will be good enough to justify a launch cost 11 times that of Falcon Heavy.

A monopoly in the making

Can you say "monopoly?"

When you combine SpaceX's lowest-in-the-industry prices with its (current) greatest-in-the-industry capacity, it's hard to see how Boeing and Lockheed's super-rocket -- which, again, hasn't yet been proven in flight -- will be able to compete with Falcon Heavy. In any future contest where price is an object, Falcon Heavy should win, hands down. And in the present, with the SLS still unbuilt, there seems to be no reason for anyone with a very large payload to launch today to consider any other rocket provider than SpaceX.

For the time being, heavy launch looks like SpaceX's market to lose. And it still has a whole solar system to win. 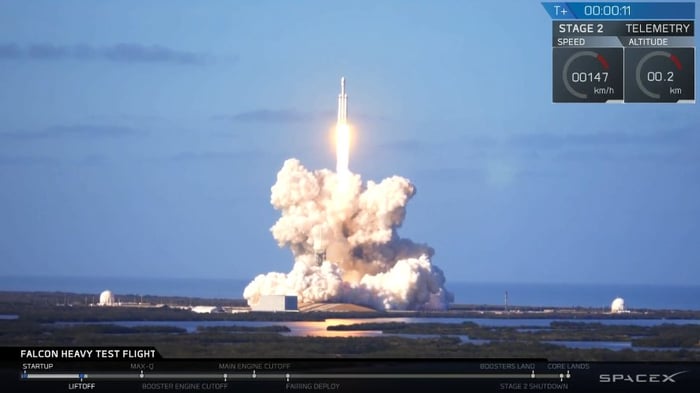 2.61 astronomical units (AU) and a cloud of dust -- SpaceX's Falcon Heavy launches on a voyage past Mars. Image source: SpaceX.