All of a sudden, the moon is looking attractive again.

After years of hearing anyone and everyone talk about how America needs to go to Mars, in 2017, talk began shifting back to whether visiting the moon -- and maybe even setting up a way station there -- might not be the best first step toward an expedition to Mars.

Elon Musk's SpaceX wants to go to the moon, and once its new Falcon Heavy rocket begins flying, it should be powerful enough to get there. Jeff Bezos' Blue Origin has plans to visit the moon as well and is likewise building a rocket that could eventually make the trip. Meanwhile, over at NASA, the team building the new Space Launch System was hoping to try a moonshot as early as next year -- proving that NASA remains relevant to the space race in the 21st century, and blazing the trail before Musk or Bezos could steal its thunder. 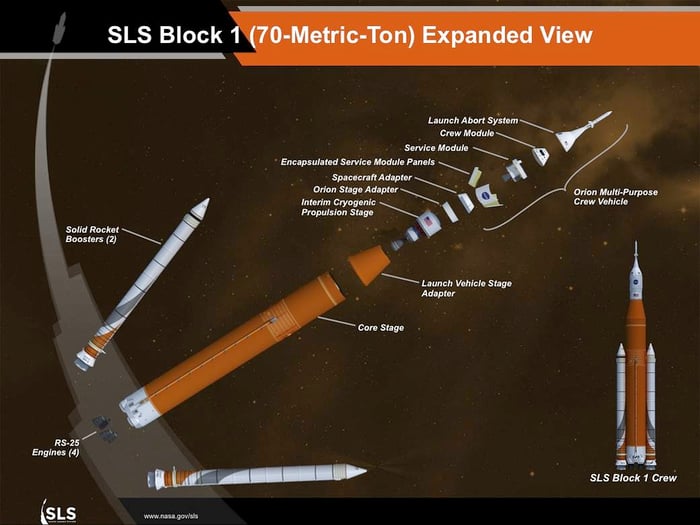 This is what Space Launch System will look like -- if it ever gets built. Image source: NASA.

For the second time this year, NASA has pushed back the maiden flight of its Space Launch System (SLS). Citing technical problems with welding on the rocket's core stage, among other issues, NASA announced in April  that SLS will not launch next year as planned, but in 2019 instead.

Last week, NASA revised its schedule once again. While the agency says there's still a remote possibility  that the SLS rocket could launch by December 2019, it now looks like June 2020 is more likely -- and the first manned  voyage by the SLS may not take place until 2023 .

What is the Space Launch System?

Nearly twice the size of the Space Shuttle -- standing 322 feet tall on its launchpad -- and costing an estimated $23 billion in development costs  over the seven years  it's taken to build, NASA's Space Launch System will be the most powerful spaceship the agency has built since its Apollo program of the 1970s. All of most of the biggest names in space (with the notable exception of SpaceX) have been roped into its construction -- with Boeing (NYSE:BA) serving as prime contractor on the project, Aerojet Rocketdyne (NYSE:AJRD) building the main and second-stage engines, Orbital ATK (NYSE:OA) contributing a pair of solid rocket boosters to give SLS extra liftoff oomph, and Lockheed Martin (NYSE:LMT) building the Orion space capsule that sits atop the SLS.

And at an estimated cost of $500 million to build and launch each SLS rocket, there would be a lot of loot for these partners to share in.

What was the original plan?

As recently as a couple of years ago, the SLS was on track to make its first, unmanned launch -- Exploration Mission 1 (EM-1) -- on Sept. 30, 2018. The spaceship was to launch from Kennedy Space Center in Florida, shoot its Orion space capsule past the moon, and then swing back home to splash down to Earth 20 days later. A few years later, EM-2 would send the SLS back out to the Moon's neighborhood again, this time on a manned mission aimed and with the possible goal of capturing and studying a passing asteroid. Fast-forward another dozen years or so, and the SLS might be ready to make an attempt at reaching Mars.

The SLS will justify its high cost -- again, about $500 million per launch -- by boasting the largest payload capacity of any rocket on Earth. Yet SpaceX's Falcon Heavy rocket, now expected to conduct its first launch early next year , should be nearly as capable, and at a far more attractive cost.

According to SpaceX's website, a Falcon Heavy launch should cost $90 million per launch -- 18% of the SLS's cost. The SLS can carry 70 tons of cargo  into orbit; Falcon Heavy, 64 tons -- or 91% of the SLS's payload. What's more, a planned upgrade to "Block 5" Merlin engines that are now in the works should improve Flacon Heavy's engine thrust by "almost 10%,"  reducing the SLS's payload advantage over Falcon Heavy to essentially nil.

What it all means to SpaceX -- and to ULA

Now here's the thing: In outlining his space policy last year, advisors to now-President Trump seemed to express a preference for funding one single space launch platform for reaching the moon. Given the sizable difference in the cost for SpaceX to launch its big rocket, versus what it would cost Boeing-and-Lockheed joint venture United Launch Alliance to launch the SLS, this might induce the administration to choose SpaceX's Falcon Heavy to reach the moon if (a) the rocket works and (b) it's as cheap as Elon Musk is saying it will be.

If Falcon Heavy launches as planned next year, it could answer both these questions simultaneously and throw a serious monkey wrench into NASA's plans to keep funding Boeing, Lockheed, Aerojet, and Orbital's efforts to build it a workable SLS. Although it was disappointing to see Falcon Heavy's launch pushed back -- as recently as last week, we were still expecting to see it launch in December -- SpaceX's big new rocket should still beat the SLS into orbit by at least a year, and maybe even two years.

This will give Musk a lot of time to demonstrate to the president, and to NASA, that he has a rocket nearly as good as -- and a heck of a lot cheaper than -- the SLS, all ready and waiting to visit the moon, and years before NASA and its contractors get the SLS ready for prime time.

What's more, by the time the SLS is ready to begin launching, SpaceX may have an even bigger, even better rocket to compete with it -- the massive "BFR," which Musk says could be ready as early as 2020. If that one is ready for demo by the time Musk says to expect it, then the SLS may be just one more delay away from getting shut out of the space race entirely.