Please ensure Javascript is enabled for purposes of website accessibility
Log In Help Join The Motley Fool
Free Article Join Over 1 Million Premium Members And Get More In-Depth Stock Guidance and Research
By Rich Smith - Nov 7, 2015 at 8:00AM

And who will get the money? And how long will it take?

Matt Damon has been to Mars. Now, NASA wants to visit him -- and American industry will help.

Last month, NASA's top contractors helping build the Space Launch System (SLS) super-rocket announced what they called a "significant ... milestone" on the path to Mars. On Oct. 22, NASA confirmed that SLS has passed its Critical Design Review, the first top-to-bottom evaluation of a major new launch vehicle that NASA has conducted since the 1970s. NASA confirms that SLS is "within cost and schedule constraints" and meets all system requirements that have been established for it.

Accordingly, SLS is greenlit for "production, assembly, integration and testing..."

What is SLS?
SLS is NASA's next-generation space-launch vehicle. A monster rocket nearly as big as the spaceships that once sailed between Earth and the moon during the Apollo missions of the 1960s and '70s, it's designed to propel the Orion spaceship -- built by Lockheed Martin (LMT 0.57%) -- into orbit and beyond.

According to NASA data, SLS will stand 322 feet tall upon completion -- nearly twice the height of the Space Shuttle and about as tall as a football field (plus one end zone) is long. Powered by two enormous solid rocket boosters built by Orbital ATK (OA) backing up a core stage powered by Aerojet Rocketdyne (AJRD 0.24%), SLS will produce 8.4 million pounds of thrust at liftoff -- 8% more "oomph" than the Space Shuttle produced and 12% more than sent the Saturn V rockets hurtling toward the moon.

Altogether, SLS is designed to lift payloads up to 70 metric tons initially. Subsequent upgrades to the engines will nearly double that payload to 130 tons.

Artist's conception of what SLS will look like in flight. Image source: NASA.

Who builds SLS?
Four of America's biggest "space tech" firms have taken the lead in building SLS for NASA. Among them:

Together, these four firms (and their smaller partners on SLS) will share in an expected $7 billion that NASA is expected to invest in SLS through the program's first launch in 2018. Ultimately, the rewards could be even richer than that. By some estimates, taking SLS from Earth orbit to the moon and ultimately to Mars could be a $30 billion endeavor -- and some analysts posit costs in excess of $100 billion over a term of years. 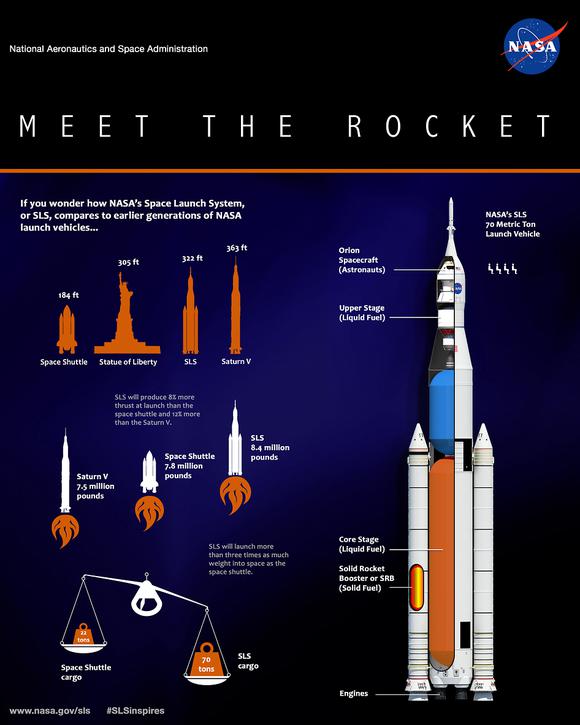 A trip to Mars would be a big coup for NASA -- on a big spaceship and with a correspondingly big price tag. Image source: NASA.

How many years, exactly?
How long all of this will ultimately take is anybody's guess, but we do know a few specifics. With all systems "go" for SLS's continued development, NASA is on track to launch the first unmanned SLS mission, designated Exploration Mission 1 (EM-1), on Sept. 30, 2018. The launch is scheduled to take place at Kennedy Space Center in Florida. EM-1 will send Orion into a 20-day circumlunar orbit, passing the moon and going farther from Earth than any previous piloted space mission, and returning to Earth.

Five years later, SLS will send up EM-2, a manned space mission this time, shooting four astronauts to the moon -- perhaps with the aim of lassoing a stray asteroid and placing it in lunar orbit for further study.

And then, the next step: Mars.

NASA hasn't yet put a firm date on a Matt Damon-esque mission to Mars, mind you, saying only vaguely that it's looking to get this done sometime "in the 2030s." But with a potential $100 billion bonanza for the companies that help to get them there, it should be worth the wait. 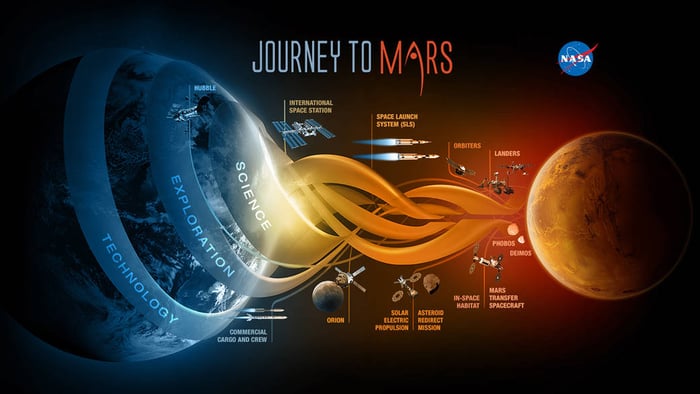 Mankind's move to Mars won't be a straight-line endeavor -- but already, the tentacles are extending. Image source: NASA.