Sometime in the next decade, NASA intends to send up SLS to lasso an asteroid from the Van Allen Belt and put it in orbit around the Moon, then revisit said asteroid with a second SLS and conduct research upon it. In addition to the pure science aspects, the missions also offer an opportunity for NASA to practice procedures that could be used to redirect asteroids found to be on potential collision courses with Earth.

There's just one problem: Congress has yet to cough up the funds. 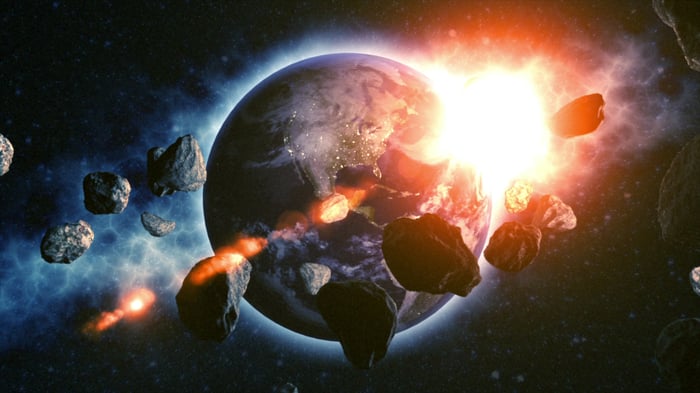 Asteroids are all around us -- and NASA plans to grab one. Image source: Getty Images.

NASA's plan, which depends heavily on prime contractor Boeing to implement it, aims to gradually build up proficiency in "deep space" missions beyond low earth orbit, or even geosynchronous transfer orbit around the Earth. That accomplished, NASA would take the final step of assembling all this knowledge -- and one really big spaceship -- for a manned voyage to Mars.

But as our friends at Spaceflight Insider reported earlier this month, Congress is not exactly enthralled with this idea. According to SI, House of Representatives Committee on Science, Space, and Technology Chairman Lamar Smith has criticized the twin asteroid mission plans as "uninspiring," while the House Appropriations Committee worries they will not "appreciably contribute to the overarching mission to Mars."

Result: A recent bill before the House, covering funding for NASA in fiscal 2017, states clearly: "[N]o funds are included in this bill for NASA to continue planning efforts to conduct either robotic or crewed missions to an asteroid. Instead, NASA is encouraged to develop plans to return to the Moon to test capabilities that will be needed for Mars, including habitation modules, lunar prospecting, and landing and ascent vehicles."

Translation: "Asteroids? We don't need no stinkin' asteroids. (And we're not going to pay for them, either.)"

This could pose a problem for Boeing and its compatriots on the SLS project. According to the Government Accountability Office, the SLS program is expected to generate revenue of $23 billion for Boeing, Lockheed, Orbital ATK, Aerojet Rocketdyne, and their partners. These funds would cover "the first planned SLS flight in 2018, the ground systems for that effort, and the first two Orion flights currently planned for fiscal years 2018 and 2021 or 2022."

But what happens if funding for two-thirds of the planned flights gets nixed by Congress? Even assuming funding for the first SLS flight, the ground systems, and the costs of general overhead get funded, that's probably still something on the order of $14 billion in revenue that Boeing and its partners were expecting -- out the space hatch.

SI notes that opposition to NASA's asteroid missions is not as pronounced in the U.S. Senate as in the House. Until the two bodies reach an agreement on how to fund NASA (and which programs to fund), there's still a chance the asteroid missions will happen, and the asteroid revenue will flow to Boeing.

Even failing that, legislative language urging NASA to invest in "plans to return to the Moon," to build "habitation modules," practice "lunar prospecting," and develop "landing and ascent vehicles" all offers opportunities for Boeing to recoup revenue that might be lost if the asteroid missions get canceled.

On the other hand, it also offers opportunities for Boeing competitors to swoop in and snatch away revenue for modules and mining (Bigelow) and for landers and ascenders (SpaceX). Boeing isn't out of the woods -- or maybe out of the asteroid field would be a better metaphor? -- yet.