It cost us $100 billion to build the International Space Station (ISS). Up until very recently, it was looking like that investment would soon be lost, after Russia pulls out of the ISS consortium in 2023 and carts off its several ISS modules to build a new, all-Russian space station of its own. That looked like it would leave the United States and NASA with the bleak prospect of figuring out how to fund and operate a space station on our own.

But you're not going to believe the surprising turn this story just took. 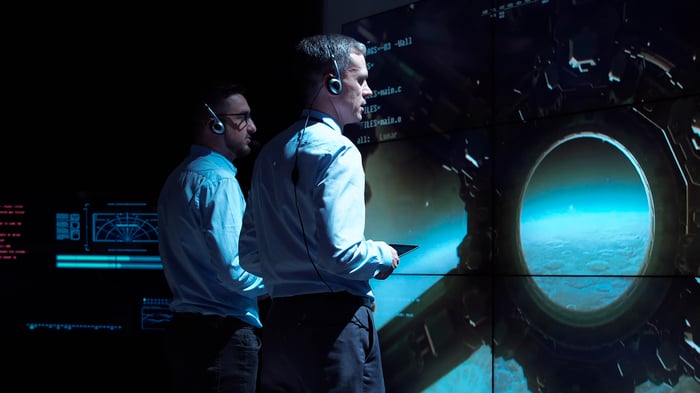 Within a decade, this could be the view out of a new moon space station. Image source: Getty Images.

Keep your friends close, and your rivals even closer -- in space

Relations between the United States and Russia have not been great lately. In fact, ever since Russian troops invaded and annexed Ukrainian Crimea in 2014, things have been going downhill, with news agencies reporting everything from Russian interference in the 2016 presidential election to rumblings about Russian hackers potentially preparing for a cyberattack on the U.S. electric grid.

This political animosity has even bled over into the sphere of space exploration, where Russian Deputy Prime Minister Dmitry Rogozin famously threatened to cut off U.S. access to ISS, suggesting U.S. astronauts would have to travel to ISS "with the help of a trampoline" if denied access to flights on Russian Soyuz rockets. And yet, despite the war of words, astronauts continue to ride Russian rockets to ISS to this day -- and NASA continues to cut $82 million checks to Roscosmos to pay for the privilege.

A new hope for a new space station

And now the special relationship between the American and Russian space agencies appears set to grow even closer. At the International Astronautical Congress (IAC) in Adelaide, Australia, last week, NASA and Roscosmos announced they are teaming up to plan a manned spaceport in lunar orbit. Construction could begin as early as the mid-2020s -- less than a decade from now.

Such a station, tentatively called the Deep Space Gateway, would be useful as a staging base for expeditions to explore the lunar surface. Equipped with a Russian-built docking unit, it could also be used as a refueling depot for missions deeper into space. In addition, Russia plans to contribute Proton and Angara rockets to carry components to the station's cislunar orbit, preparatory to assembling it there.

In its statement on the cooperation agreement, NASA noted that its own spaceships could also be used to transport station components, as well as depart from the station on interplanetary missions. NASA would use the Boeing-built (NYSE:BA) Space Launch System rocket in conjunction with Lockheed Martin's (NYSE:LMT) Orion space capsule for both missions.

All of which sounds pretty optimistic -- but do mind the caveats.

So in short, while this announcement of cooperation with Russia to build a moon base is hopeful, it's not set in stone, much less firmly rooted in moon rock. Plans could still change, and the cooperation between NASA and Roscosmos could still fall apart. That being said, even just the exploratory stages of considering such a project are already producing revenue for the contractors involved.

For several years now, NASA has been awarding contracts under its Next Space Technologies for Exploration Partnerships (NextSTEP) program, aimed at developing the technologies that would make a Moon base, and later interplanetary travel, possible. From new forms of locomotion for space vessels, to new habitats for astronauts to live in, the contracts are piling up. Why, just this past summer, Lockheed Martin won a NextSTEP "Phase II" contract to build an astronaut habitat from a repurposed space shuttle-cargo container -- a project that will take 18 months to complete. Lockheed has also been hired to prototype a "Deep Space Avionics Integration Laboratory ... to demonstrate command and control between the Deep Space Gateway and Orion." Meanwhile, Boeing and Orbital ATK (soon to be owned by Northrop Grumman) are both working on lunar habitat projects in parallel with Lockheed.

At present, neither NASA, Lockheed, nor any of the other contractors involved have disclosed the cost of these projects. Still, you have to figure they're worth something -- and probably will be worth a more once (if) this lunar space station project gets off the ground. And when you recall that our last space station cost $100 billion, these projects probably could be worth a whole lot more.