Please ensure Javascript is enabled for purposes of website accessibility
Free Article Join Over 1 Million Premium Members And Get More In-Depth Stock Guidance and Research
By Rich Smith - Jan 8, 2018 at 7:03AM

Arkyd-6 could pave the way towards mass production of small spacecraft to survey the Asteroid Belt for mineral riches.

"The man who first learns to mine asteroids and bring back their minerals to Earth will become the first trillionaire. There's no question about that in my mind." -- Neil deGrasse Tyson

When I interviewed Hayden Planetarium director Neil deGrasse Tyson last year, I have to admit -- this is the quote that really stuck in my mind.

Last year was a big one for the burgeoning field of space mining. On the one hand, NASA shifted away from its goal of capturing an asteroid for examination as part of its EM-2 test flight of the Space Launch System, distancing the government from mining space resources for exploitation on Earth. On the other hand, in an effort to keep pace with U.S. laws that are loosening constraints on private development of space, the government of Luxembourg passed a new law laying out arguably the most details yet on how a company can legally conduct space mining. In a move that grants sovereign "cover" to countries interested in mining space, Luxembourg accorded broad rights to companies that incorporate in Luxembourg to launch space ships, mine asteroids, and bring their mineral wealth back to Earth.

One company that's aiming to take Luxembourg up on its offer is space mining pioneer Planetary Resources. 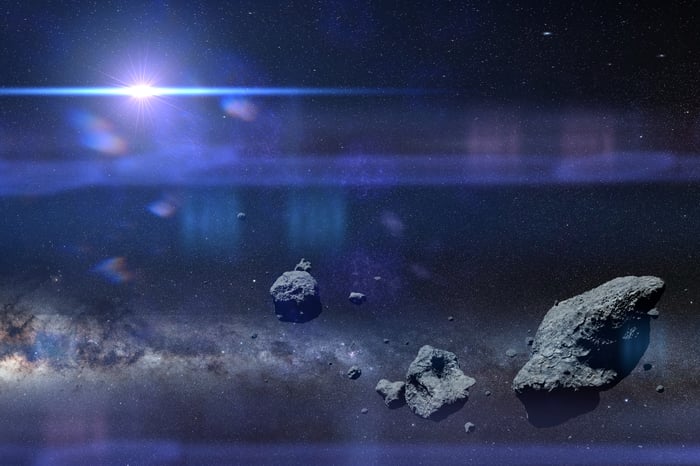 These space rocks might not look like much, but any one of them could contain 1,000 pounds of pure gold. (But which one is it?) Image source: Getty Images.

In January, privately held Planetary Resources plans to launch its second spacecraft dedicated to advancing the mission of space mining. Arkyd-6, a "technical evolution" of Planetary Resources' earlier Arkyd-3 spacecraft, is a small, 4-inch x 8-inch x 12-inch satellite. This month it will launch as a secondary payload atop an Indian PSLV-C40 rocket.

Once in orbit, Arkyd-6 will test second-generation avionics, communications, and attitude control systems as well as a new "A6" instrument for taking infrared images of space objects designed to detect the presence of water on asteroids.

By the end of this decade, Planetary Resources hopes to send a fully functional spacecraft "to a near-Earth asteroid" to conduct the company's first "asteroid prospecting mission." Parsing the language of this statement, it's not likely that Planetary Resources will be able to conduct any actual mining even then, instead just "prospecting" an asteroid to see if it contains substances worth mining later on.

Eventually, Planetary Resources plans to "mass produce" small prospecting spacecraft "at extremely low cost" -- both production costs and launch costs. That will be necessary if the company hopes to survey even a small fraction of the one-million-plus-kilometer-and-up diameter space rocks in the Asteroid Belt -- or the millions more asteroids smaller than one kilometer in size -- to determine which ones contain resources worth mining. In anticipation of that day, Planetary Resources says it is "developing ... relationships with leading mining and energy companies" to do the actual mining work.

Why mine asteroids at all? Dr. Tyson says that even a small asteroid might contain "1,000 pounds" of precious metals, rare on Earth and worth upwards of $19 million in the case of gold. Water -- useful both for drinking and as a fuel source for spaceships -- could also be extremely valuable. Gold is currently worth about $1,300 an ounce on Earth. Finding an ounce of water on an asteroid in space, though, saves NASA the $625 or so it costs in fuel to lift that ounce off the ground and into orbit. (Hence Arkyd-6's equipment, which is tailor-made for finding water.)

Putting Arkyd-6 into orbit is a step toward opening up the solar system to exploration -- even if it's only a baby step.