The bigger question for investors is which company will not build it?

United Launch Alliance's Atlas V launch vehicle is one of America's biggest rockets. But in just four short years, we'll get a new rocket to send our satellites into space -- and this one won't depend on Russian rocket engines. 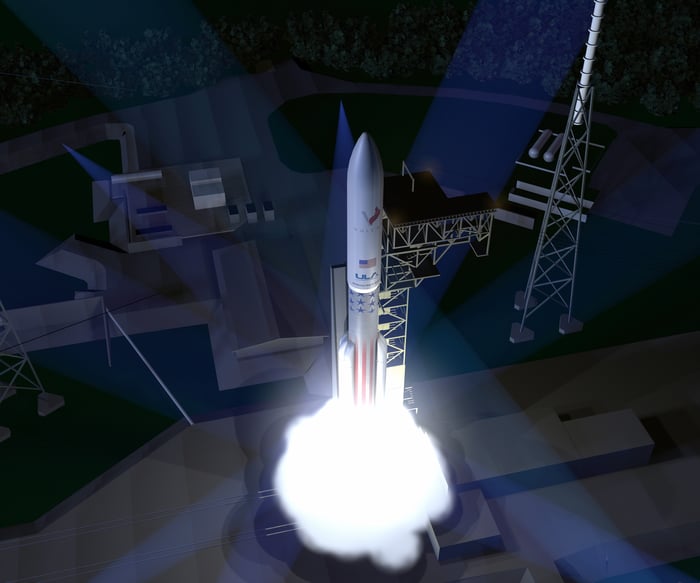 The new rocket, dubbed "Vulcan" will replace Atlas as America's go-to space rocket. Built around one first-stage booster and one second-stage rocket, Vulcan will be "simple," "affordable," and will offer "unprecedented flexibility in a single system." Plus, ULA is designing Vulcan with an eye to further improvements down the road.

By 2023, ULA plans to switch out the rocket's Boeing-built Centaur second stage rocket and replace it with an even more powerful "ACES" (Advanced Cryogenic Evolved Stage) rocket.

Additionally, Vulcan will boast anywhere from four to six solid rocket boosters to give it some extra "oomph" at liftoff. Vulcan is more than the sum of its parts. Source: ULA.

Once fully assembled, ULA says these several parts will enable Vulcan to "exceed the capability" of today's Atlas V. Moreover, with ACES inserted, Vulcan will match "the current capability of the Delta IV Heavy, which carries the largest payloads for our most critical customers" -- and at a lower cost.

All that remains now is to figure out who will build the parts.

So, who will build them?
Primarily intended to replace Lockheed Martin's (LMT 2.05%) Russian-engine-dependent Atlas V, the Vulcan will mostly be a Lockheed Martin project. But with its eventual capability of replacing Boeing's Delta IV Heavy as well, the new rocket will be a joint venture between both of America's aerospace giants. The picture of who will help them build the actual rocket engines, too, has gotten a whole lot clearer in recent weeks.

Earlier this month, Lockheed Martin announced plans to "expand production capabilities for the American-made BE-4 engine that will power the Vulcan next-generation launch system." BE-4 is a methane-and-liquid oxygen-fueled engine being developed by Jeff Bezos's privately funded Blue Origin rocket venture. It's competing with an AR1 rocket under development by Aerojet Rocketdyne (AJRD 3.29%).

Lockheed Martin's announcement makes it clear that it prefers the former engine over the latter to power Vulcan's first stage. But what about the second stage, and what about the solid rocket boosters that will ring around Vulcan at liftoff?

Interestingly, ULA went one step further in making this announcement, confirming that it will use Orbital ATK's solid rocket boosters on both the Vulcan and the Atlas V (so long as it remains in service). The "sole provider" language tells us, without saying so explicitly, that Aerojet Rocketdyne's services will no longer be required in this regard.

At this point in time, it seems all that remains for Aerojet Rocketdyne is its legacy role as the supplier of RL10 liquid-fueled rockets on the Centaur second stage of Vulcan -- and even that business is not secure. With Centaur set to go away as soon as ACES is up to speed, Aerojet must compete for, and win, a place within ACES, or it could find itself out of the Vulcan project entirely.

The takeaway for Aerojet Rocketdyne shareholders? Things are not looking good, and the pressure on Aerojet to raise its bid significantly, and buy ULA entirely -- probably overpaying in the process -- just got intense.

ULA getting rid of its Russian RD-180 ROCKET ENGINEs was supposed to be good news for American rocket-makers like Aerojet Rocketdyne. That story has now changed. Source: Wikimedia Commons.