U.S. Bancorp recently announced that it is planning to accelerate branch closures as digital banking transactions and sales have increased during the coronavirus pandemic.

Over the last 18 months, U.S. Bancorp (USB 0.61%) has reduced its branch footprint by about 10%. The plan was ultimately to shrink the footprint by 10% to 15% by early 2021. Now, executives at the bank say they intend to cut an additional 15%, which equates to closing more than 400 more branches, according to the bank's latest count. I think you may see more banks follow suit as they look to cut expenses and as digital banking becomes more mainstream. 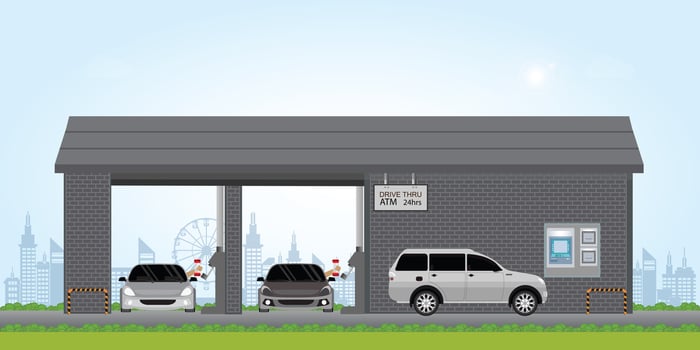 The need to cut expenses

There is not a lot that banks can do to increase earnings in the near term. Most of them had their best performance of the year in the third quarter, but that's only because they didn't need to build reserves for loan losses like they did in the first half of the year. With interest rates around zero, net interest income is going to be challenged, especially with loan demand so low right now. Additionally, many banks that have been buoyed by big trading and investment bank divisions expect activity to start to normalize soon.

That leaves little room for banks to increase revenue, which is why they will likely turn to expenses, a line item they have more control over right now -- and which many of them had to raise during the pandemic. U.S. Bancorp saw its non-interest expenses in the third quarter increase by 7.2% year over year and 1.6% from the second quarter. CFO Terrance Dolan attributed the expense increase to COVID-19 expenses and increased costs needed for the bank's prepaid card business and for producing more revenue in the bank's mortgage and capital markets businesses.

To offset some of those new increases, executives see physical branches as a prime place to cut expenses as digital adoption has grown during the pandemic. Digital active customers at U.S. Bancorp -- those that have been active in at least one digital channel in the past 90 days -- grew 4% between August 2019 and August of this year. In that same time period, digital transactions are up 7% and digital loan sales are up 18%.

"While physical branches and personal interactions will always be important, we need fewer branches today than we did even a few years ago, and the branches of the future need to be more advice centers and locations where transactions take place," U.S. Bancorp CEO Andrew Cecere said on the bank's third-quarter earnings call. The majority of additional branch closures at the bank will be those already closed due to the pandemic. Dolan said the additional branch closures will result in gross savings of roughly $150 million. He also said the bank could look to cut corporate real estate as well.

Other big banks have also been accelerating branch closures. Wells Fargo is planning to eventually reduce its footprint from 5,400 to 4,000, while PNC Financial Services Group plans to cut 160 total branches this year, and another 120 by the end of 2021. "You will see us continue to thin out our network. For that to work, your digital sales have to pick up at a pace that offsets the sales you would get at the branches you are closing. So far, that is happening and then some," PNC's CEO, Bill Demchak, said at the Barclays Financial Services Conference back in September.

The physical bank branch has been on the decline for many years, and more digital adoption by bank customer only makes it more viable for banks to close branches -- especially as some see their expenses rise and the industry struggles with revenue in the low-rate environment. I still think the physical branch will be a part of banking because many customers still like to walk into a branch to deal with their issues, and branches are still a good way to launch into a new market. It also will likely get more difficult from a political perspective to keep shuttering lots of branches. But at the very least, banks are going to want to examine how they use the physical branch and how they operate in what is now a much more digital world.