These clinical stage biotech players have won billions in funding -- and the attention of investors.

Moderna (MRNA -2.01%) and Novavax (NVAX 2.82%) have been taking turns at center stage with their coronavirus vaccine programs. Moderna grabbed investors' attention in March when it became the first drugmaker to test an investigational coronavirus vaccine in humans. Novavax wowed the crowd a few months later when the U.S. government granted it $1.6 billion in support of its coronavirus vaccine candidate. At the time, it was the biggest such award to a vaccine maker.

Year to date, shares of both clinical-stage biotech companies have soared -- over 260% for Moderna and more than 2,300% for Novavax. Since their highs, though, both stocks have given up some of their gains. As the coronavirus vaccine race approaches its final stages, which of these two players represents the best buy right now? To find out, let's take a closer look at each one. 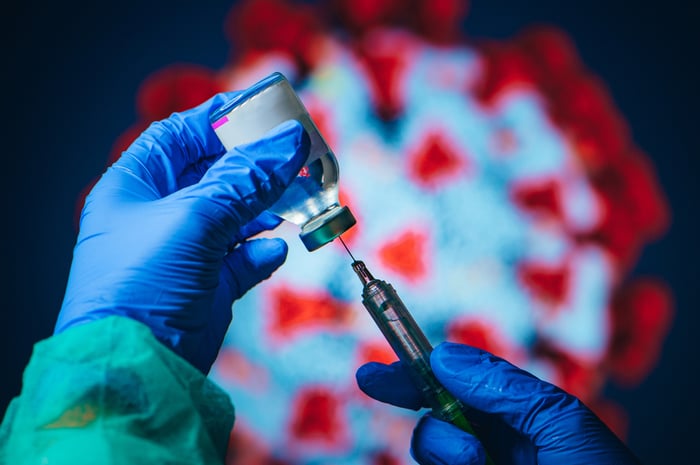 Moderna is closer to the vaccine finish line than Novavax from a timeline perspective. Last month the company completed dosing for half of the participants in its phase 3 trial. CEO Stephane Bancel said that means Moderna may apply for emergency use authorization (EUA) on Nov. 25 at the earliest. The trial began on July 27, with the goal of enrolling 30,000 volunteers.

The company is also making regulatory progress outside of the U.S. It recently announced a rolling submission to Canadian authorities, which allows regulators to begin reviewing data as it becomes available rather than waiting for the complete file. And in Europe, Moderna will benefit from a centralized procedure, which means one review process and decision for approval in all European Union countries.

Moderna looks solid when it comes to data, funding, and production. Interim phase 1 results showed participants produced higher levels of neutralizing antibodies (which block infection) than those found in recovered COVID-19 patients. That includes younger participants and the elderly. The U.S. government has granted the biotech company a total of up to $2.48 billion, and Moderna is preparing to deliver 500 million to one billion doses of vaccine annually starting next year.

Novavax is farther behind from a timeline view. The company started a phase 3 trial in the U.K. in late September, with a plan to enroll 10,000 participants in a period of four to six weeks. The vaccine candidate -- or placebo -- will be administered in two doses 21 days apart. Even if Novavax enrolls all volunteers in a month, the timing of immunizations and the two months of data required by the U.S. Food and Drug Administration mean it's unlikely Novavax will be ready to apply for EUA ahead of Moderna (unless Moderna stumbles).

When it comes to data, funding, and production, Novavax is on solid footing. In trial participants ages 18 through 59, neutralizing antibodies surpassed levels of those seen in recovered COVID-19 patients. Results in older participants aren't yet available. Novavax has garnered $2 billion in funding and ramped up production capacity to more than two billion doses annually as of next year.

But one of the best bits of news from Novavax is this: The company plans to explore a combined flu and COVID-19 vaccine. It's clear that Novavax is in a good position to study a combined vaccine. Earlier this year, the company announced that NanoFlu, its flu vaccine candidate, met all primary endpoints in a pivotal trial. The next step will be a regulatory submission.

So, will it be Moderna or Novavax?

Moderna is closest to EUA or full approval of its coronavirus vaccine. Novavax is the perfect player to develop a combined flu-COVID vaccine. Both biotech stocks are off their all-time highs. And Wall Street is optimistic about further gains. Moderna could rise 25% and Novavax may climb more than 100% in the coming 12 months, according to the average analysts' estimate.

I think Moderna's near-term prospects may be stronger if it wins the coronavirus vaccine race. But if I had to choose only one player for a long-term investment right now, I would go for Novavax for two reasons.

First, I'm optimistic about NanoFlu's approval prospects based on its phase 3 data. If approved, NanoFlu would provide a recurring source of revenue since flu season impacts many people year in and year out. Second, the idea of a combined flu-COVID-19 vaccine, as mentioned above, could be big. Novavax said this potential product would be for post-pandemic use. And that translates into a solid long-term revenue opportunity.