Two programs may seek emergency use authorization within the next six weeks.

We are nearing the final stage of what may be the world's most-watched race. And I'm not referring to the U.S. presidential election. I'm referring to the race to develop a COVID-19 vaccine. As of now, 10 programs are involved in phase 3 studies.

And in a few days, a U.S. Food and Drug Administration (FDA) meeting may offer clues as to what will happen next. The Vaccines and Related Biological Products Advisory Committee will meet Oct. 22 to discuss studies that should be performed to further confirm vaccine candidates' safety and efficacy (whether pre- or post-approval).

In a briefing document, the FDA emphasized that any emergency use authorization (EUA) must be supported by phase 3 data. And the agency said that prior to granting an EUA, the committee would meet for an open session to consider that data. With the finish line now on the horizon, investors may be wondering which players have the best chance of winning the much-desired EUA. Let's take a closer look at where some of the leaders stand. 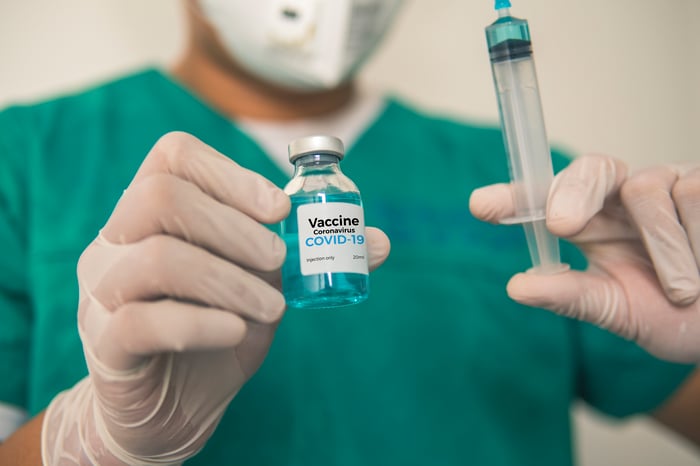 Pfizer and German biotech partner BioNTech have 37,000 volunteers currently enrolled in the phase 3 study of their investigational vaccine, 28,000 of whom have received their second of two doses of the vaccination. In an Oct. 16 update, Pfizer CEO Albert Bourla reiterated that the companies may know whether their vaccine candidate is effective as early as the end of October. Pfizer had earlier said the companies could possibly seek regulatory review by late October. But in the update, Bourla changed the timeline. He estimated the companies would have the two months of safety data required by the FDA in the third week of November and said Pfizer would apply for an EUA "soon after."

Meanwhile, Pfizer and BioNTech have started rolling submissions in Canada, as well as in Europe via the European Medicines Agency (EMA). Rolling submissions allow a company to submit data as it becomes available so regulators can start the review process, instead of waiting to file a full submission only when all results are ready.

The data released so far has been promising. In phase 1, volunteers ages 18 through 55 produced neutralizing antibody levels 3.8 times higher than those seen in recovered coronavirus patients. And volunteers ages 65 through 85 produced levels 1.6 times those seen in recovered patients. Neutralizing antibodies are seen as a key element because their role is to block infection.

Moderna Therapeutics was the first company to begin human trials of a coronavirus vaccine candidate. Competitors such as Pfizer and BioNTech have caught up since, but this clinical-stage biotech still remains one of the frontrunners. CEO Stephane Bancel recently said Moderna wouldn't be ready to apply for an EUA before Nov. 25, by which time it should have generated enough trial data. That's because just half of the participants in the company's phase 3 trial had completed the second vaccination in the two-dose regimen as of late September. Moderna designed the phase 3 trial to include a total of 30,000 volunteers.

Moderna also has started a rolling submission in Canada. And the EMA this month confirmed Moderna's eligibility to seek review through its centralized procedure process, meaning only one submission and review is required for approval in all European Union countries.

Trial results have been favorable. In phase 1, participants ages 18 through 55 who received the dose to be given in later-stage trials produced levels of neutralizing antibodies more than four times higher than those of recovered coronavirus patients. And in phase 3, for adults ages 56 through 70 and 71 and older, this type of antibody was two to three times higher than in recovered patients.

Moderna and the Pfizer-BioNTech team remain on equal footing from a timeline and data-quality perspective. Right now, they are the players closest to seeking an EUA.

Novavax took center stage back in July when Operation Warp Speed (OWS), the U.S. government's effort to usher a potential coronavirus vaccine to market, granted the company $1.6 billion. At the time, that was OWS' biggest award to a vaccine maker.

Novavax hasn't yet reported results of its coronavirus vaccine candidate trials in older adults. But in phase 1, volunteers ages 18 through 59 produced neutralizing antibody levels four to six times higher than those found in recovered coronavirus patients.

Unless its rivals face a setback, this clinical-stage biotech company is unlikely to become the first to receive an EUA or regulatory approval for its vaccine candidate. While Pfizer and Moderna are well into their phase 3 studies, Novavax just launched its phase 3 study in the U.K. late last month. The study will administer either a placebo or the vaccination to 10,000 volunteers ages 18 through 84 with two doses over 21 days.

But Novavax has something else to offer that might keep it in the coronavirus vaccine picture over time. The company plans to start exploring a combination flu/coronavirus vaccine. Novavax has the expertise; the company's investigational flu vaccine, NanoFlu, met all primary endpoints in a phase 3 trial. The next step is regulatory submission. Novavax said a potential combination vaccine would be of use after the pandemic. No one likes the idea of getting multiple vaccines, so if Novavax is successful with a flu/coronavirus vaccine and is able to keep pricing close to that of other flu vaccines, this could be a game-changer.

AstraZeneca reached a temporary roadblock last month due to an unexplained illness in a phase 3 trial participant in the U.K. As a result, AstraZeneca paused all trials of the investigational coronavirus vaccine. They've since resumed at various sites around the world, though the U.S. study remains paused as the FDA investigates further.

Initially, AstraZeneca and partner Oxford University said phase 3 efficacy results could be available this fall at the earliest. That still could happen. But considering the trial halt, it will be difficult for AstraZeneca to be the first to present data to the FDA.

Johnson & Johnson this month temporarily paused all dosing in trials of its coronavirus vaccine candidate, including the phase 3 trial. The phase 3 study, set to involve 60,000 participants, is the biggest yet. The company halted the trial following unexplained illness of a participant.

While trial pauses are common in large studies, this one sets Johnson & Johnson behind from a timeline perspective. That said, if the company can resume soon, it still may be among the winners. And it will have the advantage of data from a large group.

Inovio Pharmaceuticals was among the first to launch human trials of its vaccine candidate. But a recent event may prove to be a big setback. The FDA has placed a partial clinical hold on the company's planned phase 2/3 trial, refusing to authorize it until Inovio answers further questions about, among other things, the device used to deliver the vaccine. Inovio said it will reply this month. The FDA then has 30 days to notify the company of whether the trial can begin.

Even if the FDA's response is positive, Inovio will have lost valuable time. Investors also are waiting for more details about phase 1 data -- including publication in a medical journal. Inovio earlier reported that its vaccine candidate showed immune response as measured by neutralizing antibodies. But unlike most rivals, the company didn't provide neutralizing antibody levels in relation to recovered coronavirus patients.

Right now, Pfizer-BioNTech, Moderna, and Novavax seem to be on the smoothest path. That said, it's important to note a setback -- or failure -- can occur at any time during clinical trials. So it's too early for any player to claim victory.

And the race may not result in just one victory. If trials are successful for more than one company, we may see a few vaccine makers on the podium. Considering worldwide demand, there is room for multiple products.

Finally, one more important point: Investors should keep in mind that clinical-stage companies, such as Moderna, Novavax, and Inovio, represent greater risk than companies that already have other products on the market. Those marketed products provide a revenue stream even if the company's coronavirus program fails. For this reason, only aggressive investors should consider adding clinical-stage biotech players to their portfolios at this point. More cautious investors may want to buy shares of a player like Pfizer or AstraZeneca -- both have vast product portfolios -- or watch the final laps of this race from the sidelines.