The marijuana industry is evolving at an incredibly fast pace in the U.S. and Canada. Many American states' markets have handily beaten old sales highs in 2020. Illinois has seen a whopping $431 million in total sales since legalization took effect on Jan. 1. The combined sales in the state (medical and recreational) came in at almost $100 million in September alone. Meanwhile, in Canada, where the illicit cannabis market has historically dominated the licit market, legal sales of marijuana dominated illegal sales for the first time ever this summer.

Despite the jump in sales in both markets, Canadian marijuana stocks have not seen quite the same revenue gains as their U.S. counterparts this year, as factors like regulatory holdups weighed heavily on business north of the border. But there are a few Canadian companies whose futures are looking bright. Canopy Growth (NASDAQ:CGC) boasts the highest market cap in the industry ($6.9 billion), and is growing sales with new products. Its cannabis derivatives have quickly captured the newly legalized Canadian market, and Canopy threatens to expand into the U.S. with the help of its strong partnership with beverage giant Constellation Brands (NYSE:STZ).

Meanwhile, in the U.S., an unconventional marijuana stock is catching investor attention. Innovative Industrial Properties (NYSE:IIPR), a real estate investment trust (REIT), leases out properties to pot companies. Innovative earns most of its revenue through rental income and pays the majority of its earnings back to shareholders in the form of dividends. Let's take a closer look at what factors could deem both of these pot stocks "millionaire makers." 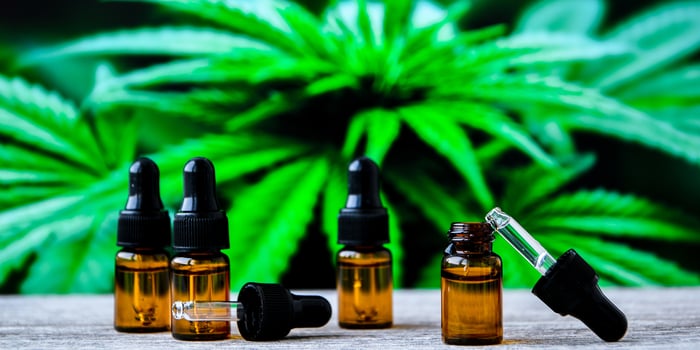 1. Canopy Growth is standing strong in the face of Canadian headwinds

Canopy Growth offers its marijuana products under brand names including Tweed, Tokyo Smoke, and Spectrum Therapeutics. Though a favorite among investors, it has not yet been able to turn a profit. But Canopy Growth still has the upper hand on its peers, mostly because of its partnership with Constellation Brands. The maker of well known beers like Corona and Modelo made an initial investment of $245 million in 2017, and it has been growing its stake ever since. Constellation now holds a 38.6% stake in Canopy.

Canopy is now focusing on achieving positive earnings before interest, taxes, depreciation, and amortization (EBITDA), especially after the launch of its innovative derivatives products. Cannabis derivatives, which include vapes, concentrates, beverages, and edibles, became legal in Canada in October 2019 as a part of "Cannabis 2.0" legislation. Canopy has launched an array of these products this year and is already seeing promising sales numbers. The products made a 13% contribution to total Canada business-to-business sales in Q1, which ended June 30.

Canopy's market cap has fallen from $9.2 billion in 2018 to $6.6 billion this year, owing to external headwinds and a few of the company's own rash decisions of rapid acquisitions and expanding too quickly too soon. But being an early mover in the Canadian cannabis market certainly has aided Canopy in growing its medical cannabis business. A 54% year over year uptick in medical cannabis sales is what made its net revenue jump 22% year over year to 110 million Canadian dollars ($83.7 million) in Q1. Total medical cannabis sales contributed to 31% of net revenue.

Canopy's strong financial backup from Constellation and its strategic acquisition of U.S. hemp company Acreage Holdings will help Canopy capture the U.S. market, if (or when) pot is federally legalized.

While Canadian pot stocks had a hard time in 2019, Innovative Industrial Properties was surging. The stock was up with a 67% gain last year, while the industry benchmark, Horizons Marijuana Life Sciences ETF, fell 35%.

The growing popularity of medical marijuana in the U.S. is evident from Innovative's results for its second quarter of fiscal 2020, which ended June 30. Real estate acquisitions drove revenue growth, which jumped 183% year over year to $24.3 million. Between April 1 and Aug. 5, the company acquired eight properties totaling 75,000 rentable square feet in California, Massachusetts, Michigan, New Jersey, and Pennsylvania. It ended the quarter with $50.2 million in cash and cash equivalents, and zero debt.

An added benefit of owning Innovative is that it's a dividend stock. REITs are popular for returning a steady amount of returns to shareholders. (The businesses are legally required to pay 90% of their taxable income back to investors as dividends.) Innovative sports a forward dividend yield of 3.6%, a far cry above the S&P 500 average of 2%. But a higher dividend yield is not all that counts. A company must consistently pay dividends in order for it to be a true sign of the business' strength. Innovative has consistently been paying dividends since 2017, even amid recent market turmoil. The company has been able to do this by growing its revenue, net income, and adjusted funds from operations (AFFO). For a REIT, AFFO determines how much cash is available to be paid out as dividends. Its AFFO grew a whopping 262% year over year to $21 million in Q2,  which helped Innovative hike its third-quarter dividend by 10%.

Both could be millionaire-maker stocks

While shares of Innovative Industrial are (relatively) sky high, Canopy stock has lost 11% of its value so far this year. Meanwhile, the industry benchmark is down 31% with the market up by 5%. 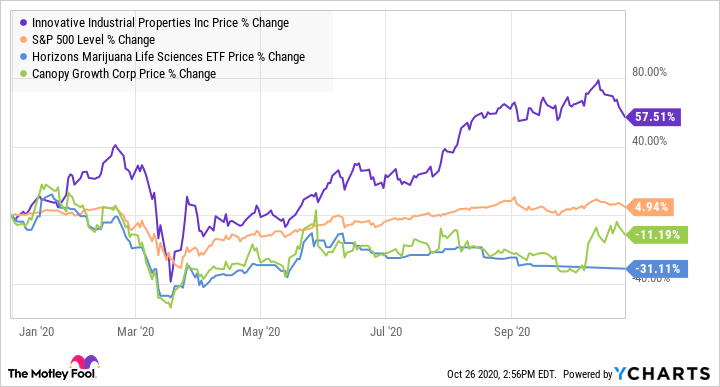 Both companies boast strong revenue gains, sturdy balance sheets, and wise growth strategies, and I believe that they could take advantage of the budding markets and become millionaire-maker marijuana stocks.