While Canada technically made medical cannabis legal in 2001, its federal courts didn't allow producers to market cannabis until 2016. Recreational cannabis, which included flowers, oils, plants, and seeds for adult use, became legal in October 2018 as part of "Cannabis 1.0" legalization. Canopy Growth (CGC -7.01%) was an early mover in this market -- it first started selling cannabis oil in its fourth quarter of fiscal 2016. It sells its marijuana products under brand names including Tweed, Tokyo Smoke, and Spectrum Therapeutics. It also has the highest market cap in this evolving industry, at $6.6 billion.

One of Canopy's strengths right now is its group of innovative derivatives products. Cannabis derivatives include vapes, edibles, concentrates, and beverages, which Canada legalized as part of "Cannabis 2.0" in October 2019. Before its first quarter ended June 30, the company had launched a range of cannabis-infused beverages, chocolates, and vape products.

Its total revenue grew 22% year over year to 110 million Canadian dollars in Q1, mostly thanks to an uptick in medical marijuana sales in Canada and Germany. Despite growing revenue, the company hasn't been able to achieve profitability yet. But it is making strides this year to make its mark in the recreational cannabis market. Let's take a look at how the future could turn out for Canopy. 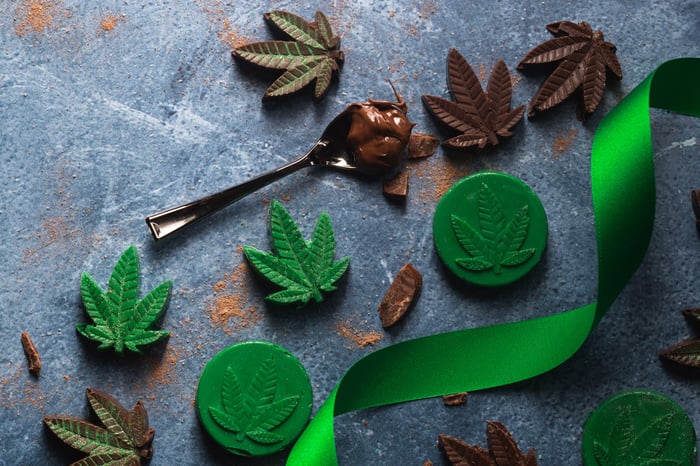 Should Canopy's future focus be derivatives?

Last year proved difficult for Canopy. Regulatory delays played a big role in disrupting legal store openings in most provinces in Canada. That led to a decline in legal cannabis sales while pushing consumers toward the black market, which offered a wide range of products at a cheaper price. While this did affect Canopy's revenue last year, the company's deal with U.S. beverage giant Constellation Brands (STZ -0.70%) in 2017 could boost its future growth. Canopy can take advantage of Constellation's network in the U.S. to market its recently introduced cannabis beverages.

Despite the challenging retail environment amid the pandemic, Canopy has shipped over 1.2 million cannabis beverage units -- it sells four THC-infused ready-to-drink beverage lines under the Tweed, Houseplant, and Deep Space brands -- since late March. Management hopes these products could help gross margin grow over 40%.

The burgeoning potential of Canopy's cannabis derivatives is evident from the 13% contribution they made to total Canada business-to-business sales in Q1. The growth of derivatives could help Canopy achieve positive earnings before income, tax, depreciation, and amortization (EBITDA), which it has failed to do up until now. In Q1, EBITDA losses rang in at CA$92 million, compared with CA$93 million in the year-ago quarter. Positive EBITDA proves a company's capability to tackle its operating expenses.

Canopy has two key opportunities to capture the U.S. market

Canopy's revenue growth could be boosted over the next few years once it launches more marijuana derivatives. The issue of fewer legal stores in Canada seems to be getting sorted out, although slowly, as Ontario received its 100th store authorization in June. Canopy also marked its entry into the Canadian province of Alberta by opening 10 retail stores under its Tokyo Smoke and Tweed banners in September.

It could also capitalize on the growth of the U.S. beverage market thanks to the strong partnership of Constellation Brands, maker of Corona and Modelo beer, among others. The strategic October 2017 partnership saw Constellation invest CA$245 million in Canopy. Since then, Constellation has been increasing its stake by exercising its warrants, a sign of its faith in Canopy's potential. This has kept Canopy's cash position strong enough to fuel expansion plans. 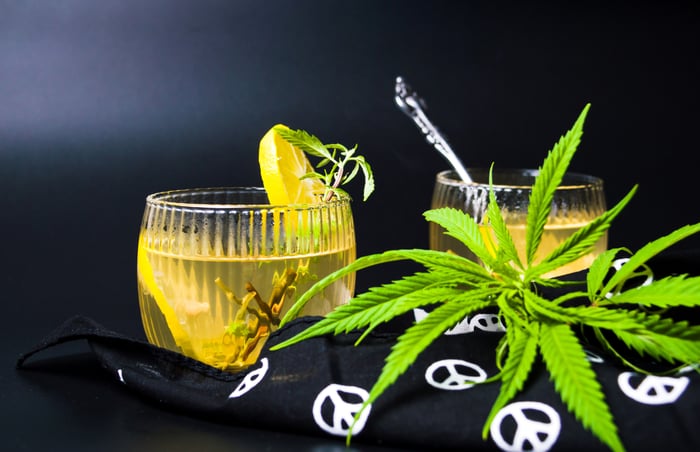 Canopy can also take advantage of the strategic deal inked last year with U.S. hemp company Acreage Holdings to market its products. The deal specified that Canopy will purchase Acreage when the U.S. federally legalizes marijuana. Both the companies made amendments to the original deal in June. Following their amended agreement, as announced Oct. 1, Acreage will market Canopy's diverse beverage portfolio in the U.S., which should also help make Canopy a worthwhile investment for long-term gains.

Canopy's management is happy with the success of its cannabis beverage products in Canada and wants to expand its reach.

Although Canopy could see a huge opportunity in the U.S. market, the only way to ensure that it'll remain a pot stock for the ages is for it to maintain its attention on Canada for now. Aphria (APHA) is showing Canopy some tough competition in terms of revenue. Aphria is the only Canadian company that has reported consistent positive EBITDA for the last five consecutive quarters.

With a market cap four times lower than Canopy's at just more than $1.4 billion, Aphria boasts the highest revenue growth in the industry -- fiscal 2020 revenue soared 129% year over year to CA$543.3 million. Meanwhile, Canopy saw revenue growth of 76% from the year-ago period, to CA$399 million, for fiscal 2020. How did this happen if Canopy was such an early mover in the Canadian market? Management made some rash decisions and went on a spending spree with acquisitions and expansions while not focusing on its core operations. Thanks to its investment from Constellation, none of this caused the company a financial crisis, but in the meantime Aphria was adopting an asset-light approach that drove its sales higher.

Note, though, that Canopy still has an upper hand over Aphria in medical cannabis sales in Canada -- the advantage of being the early mover. In fiscal 2020, Canopy saw medical marijuana revenue of CA$56.8 million,

while Aphria saw medical revenue of CA$37.4 million. Aphria has its German subsidiary, CC Pharma, to thank for that.

Not only that, Canopy's partnership with Constellation gives it an edge over Aphria to expand its recreational market reach in the U.S -- the reason why this is a pot stock to buy and hold. Aphria has no such partnership with any consumer or beverage company in the U.S.

So far this year, shares of Canopy are down 14.4%, better than the industry benchmark Horizons Marijuana Life Sciences ETF’s slump of 31%. Meanwhile, Aphria has sunk 8.0% over the same period. 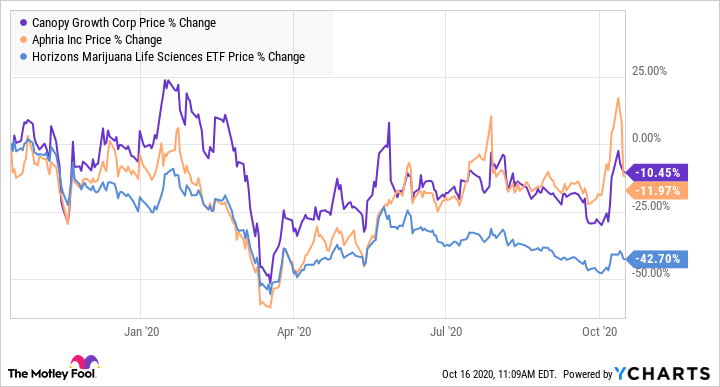 With a strong financial backup in Constellation, growing revenue, and innovative products, Canopy has a higher chance of leading the cannabis sector over the next few years, making it the best pot stock to buy and hold for the next decade.