The bank is one of the largest SBA lenders and benefited tremendously from the Paycheck Protection Program. Can its success continue?

Live Oak Bancshares (LOB 0.73%) is one of the best-performing bank stocks of 2020, and for good reason. As the bank puts it, it's "on a mission to be America's small-business bank" -- and this laser focus on small businesses has paid off.

Live Oak Bank primarily focuses on originating business loans, such as U.S. Small Business Administration (SBA) loans, which are partially guaranteed by the government. The bank focuses on loans to small banks and professionals that it believes are lower-risk, and it carefully selects those customers it will lend to. This paid off in more stellar earnings results in the third quarter, thanks in part to its involvement in originating small-business loans through the Paycheck Protection Program (PPP), a key component of the $2 trillion CARES Act passed in March.

The bank has positioned itself as one of the biggest small-business lenders in the country. While its involvement in the PPP lending program will give it a boost in the coming quarters, its prospects beyond that look even brighter with the potential growth in small businesses going forward. 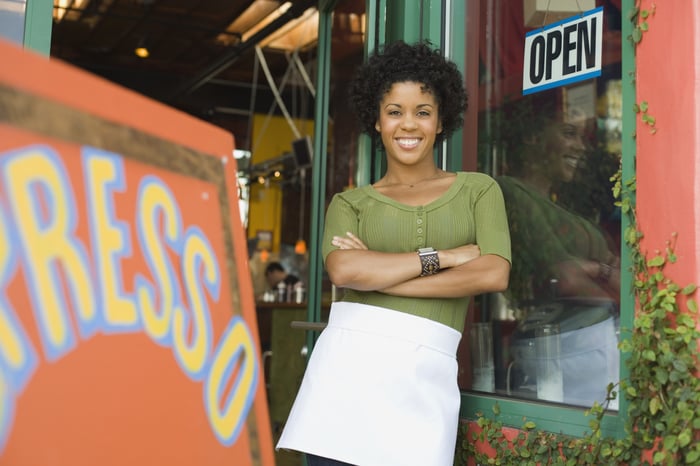 No. 1 SBA lender in United States

Live Oak Bank is the biggest lender of SBA 7(a) loans -- the SBA's primary lending program to small businesses -- with SBA-approved loans totaling $1.5 billion this year through Sept. 30. This is more than double its closest competitor, Byline Bank, which has $633 million worth of approved SBA loans. Larger banks that lead in small-business lending -- Wells Fargo and JPMorgan Chase -- have $547 million and $219 million worth of approved SBA loans, which pales in comparison with Live Oak Bank's total.

In addition, the company originated $1.7 billion worth of PPP loans this year, which generated $62 million in fee revenue that will be recognized over the life of those loans through interest income -- primarily at the time of loan forgiveness. The good news for the bank is that a majority of the fees have yet to be recognized. The bank has recognized fees of $5.4 million in the second quarter this year, and $9.2 million in its most recent third-quarter earnings period. The remainder of the PPP loans are expected to be forgiven later this year or in early 2021, at which time those remaining fees will be recognized as interest income.

The bank still posted stellar earnings in the third quarter of this year, seeing net income grow to $33.7 million -- nearly an 800% increase over net income in the same period last year. The bank managed to do all this while maintaining strong metrics -- posting a return on assets of 1.7% and a return on equity of 23.6% during the quarter.

One thing that Live Oak Bank does well is focusing on specific, carefully chosen niches, with its largest customers coming from the investment advisory, healthcare, and independent pharmacy verticals. By focusing on those industries that it knows best and deems lower-risk, the bank can ensure top-notch service to those customers.

Positive trends have emerged in small-business creation that should make investors optimistic about Live Oak's future. According to the U.S. Census Bureau, applications for the employer identification numbers that entrepreneurs need to start a business have passed 3.2 million so far this year, compared with 2.7 million at the same point in 2019, an increase of better than 18%. Additionally, new filings among a subset of business owners who tend to employ other workers reached 1.1 million through mid-September, a 12% increase over the same period last year and the most since 2007, the data show. This growth of small-business creation could serve as a tailwind for the country's largest SBA lender.

Live Oak Bank invests in technology to continue to innovate

While the commercial banking industry is highly competitive, due to the vast number of competitors in the space -- including larger banks with higher lending limits and budgets for advertising -- carving out a niche and continuing to deliver is key for Live Oak's success going forward. And because Live Oak is a branchless  bank -- that is, it doesn't have a network of physical banks but instead offers its services online -- it must focus on investing in technology to continue to improve the customer experience. For this reason, the bank has partnered with Finxact  to power its digital banking ecosystem.

By utilizing Finxact, the bank was able to quickly and efficiently originate over 11,000 PPP loans earlier this year. To put that in perspective, the bank originated 1,200 SBA loans during all of last year.

According to Huntley Garriot, President of Live Oak Bank, the bank needed to automate the booking of most of those loans just to handle the vast number of applications it received. This important investment in technology helped the bank scale up and process those loans in a quick and efficient manner.

Using the Finxact core not only helps the bank scale up and manage more loan applications, but it also enables the bank to shorten the time to market for new products -- while rapidly delivering products and services on demand. This focus on scaling up while maintaining a customer-centric focus is key for Live Oak Bank to maintain its leadership position in SBA lending.

Live Oak is one bank worth investing in

Live Oak is currently one of the best banking stocks you can buy. Its laser focus on small businesses paid off this year -- and it shows in its industry-leading lending of SBA loans, which was two times that of its closest competitor. Additionally, fees recognized from PPP lending this year will continue to boost earnings in the coming quarters as well.

As the economy continues to recover from shutdowns related to COVID-19, pay attention to small-business growth. Continued growth in this segment makes Live Oak one bank that you'd love to have in your portfolio.

This Bank Stock Looks Like a Steal After Strong Earnings