Here are the top five reasons to hold onto shares of this blue-chip biotech forever.

While many biotech stocks quickly lose their revenue momentum after patents on their biologics expire, Regeneron is constantly reinvesting a significant portion of its cash flows back into its business for the sake of innovation. Today, let us look at why Regeneron is a glimpse of what the high-flying biotech sector has to offer, and why you should buy and hold its shares forever. 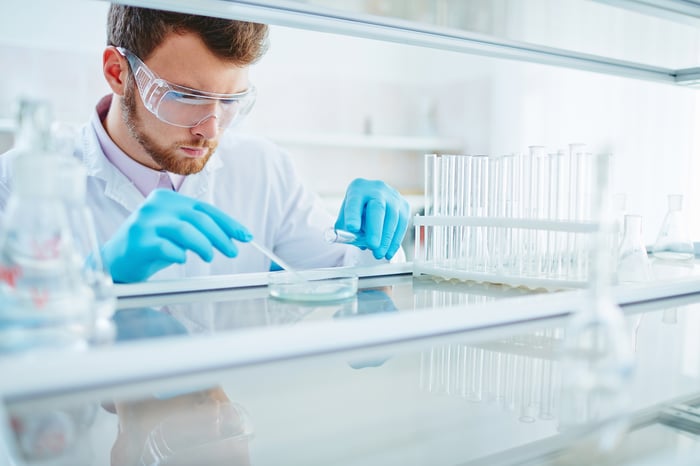 In the first half of 2020, Regeneron's revenue was up 28% year over year to $3.8 billion and its earnings per share (EPS) by 30% annually to $13.03. The growth was primarily driven by its anti-allergy drug Dupixent, which generates nearly $4 billion in annualized revenue just three years after its approval in 2017.

A rising star in the company's portfolio is Libtayo, an immunotherapy that's now the No. 1 treatment for squamous-cell skin cancer in the U.S., with over 52% market share and $80 million in revenue in Q2 2020.

That's not all; Libtayo also met all of its primary endpoints in phase 3 for the treatment of basal cell carcinoma (BCC) and non-small-cell lung carcinoma (NSCLC). Between 21% and 29% of BCC patients who took the drug responded to treatment, while patients with NSCLC who took it had a 32.4% reduction in risk of death compared with patients who received standard-of-care treatments.

It is highly likely Libtayo will see its label expanded and become a blockbuster drug. The current market size for drugs in its category is more than $21 billion worldwide, with growth of 42% in just the past year.

2. Commitment to research and development

A key reason behind Regeneron's success is its commitment to developing new drugs and therapies. In the first half of 2020, the company spent a whopping 34.5% of its $3.8 billion in revenue on research and development expenses. Regeneron currently has nine drugs in phase 3 clinical trials and a target of five regulatory submissions per year from now to 2022.

Right now, Regeneron trades for about 8 times price-to-sales and 22 times price-to-earnings, which is at a significant discount to the S&P 500's P/E of 29. That is also an excellent price to pay for a company with a net profit margin of 46%. Regeneron also posts a substantial profit of $0.28 for every dollar in shareholder's equity (ROE).

4. A long decade of growth

Regeneron's sales and bottom line have witnessed significant growth over the past decade. In the 12 months preceding Q2 2010 (TTM), Regeneron had only $434 million in revenue and generated negative $1.16 in EPS. By the end of TTM Q2 2020, the company increased its revenue by more than 20 times, to $8.7 billion, and flipped its EPS to a  positive $25.83.

As of June 30, Regeneron has more than $5.7 billion in cash and investments on its balance sheet, which is more than enough to offset its long-term debt of $1.5 billion and $716 million in financial liabilities. The company's net cash decreased from Q1 to Q2 because it acquired Sanofi's (SNY -0.66%) entire $5 billion stake in the company. By buying back stock, Regeneron will increase its earnings per share for the future, making its P/E even cheaper.