Cancer immunotherapy is rapidly becoming a major new weapon in the fight against this deadly disease. Here is a brief primer on this powerful new technology, as well as a look at where it's likely headed moving forward.

Cancer immunotherapy, or "immuno-oncology", aims to enable patient's immune system to recognize and subsequently destroy malignancies. Although immuno-oncology as a field has been around for decades, it is only now beginning to be viewed as an important new weapon in the fight against cancer. 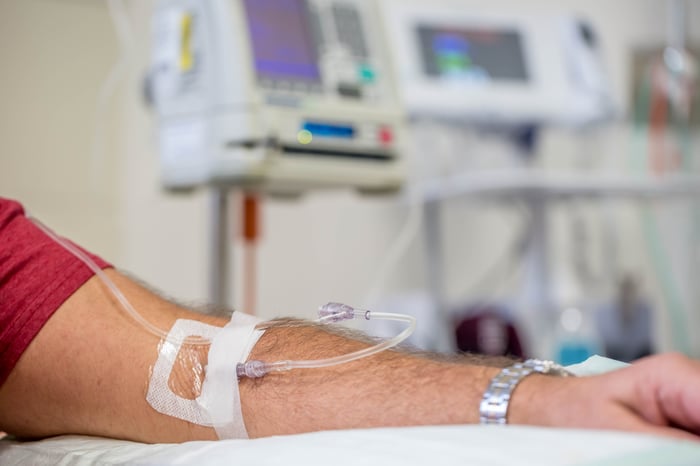 In 2013, for instance, immunotherapy was named the "breakthrough of the year" by Science magazine after a handful of monoclonal antibodies targeting so-called "immune checkpoints" were shown to dramatically reduce the size of tumors and extend patients' lives in a variety of cancers.

The basic idea behind this branch of immuno-oncology known broadly as checkpoint inhibitors is to suppress a tumor's ability to evade detection by the immune system, allowing the body to mount a potent immune response. Checkpoint inhibitors, in a nutshell, release the brakes on the immune system, which is a radically different approach from other immunotherapies, such as vaccines, that seek to amp up the immune response.

The immense power of checkpoint inhibitors as anti-tumor agents is being proven in the clinic by Bristol-Myers Squibb's (BMY 1.64%) programmed cell death, or PD-1, inhibitor nivolumab (Opdivo) and Merck's (MRK 1.23%) similar drug, pembrolizumab (Keytruda). In the second line setting for metastatic melanoma, for example, these drugs led to unprecedented levels of complete remissions and durable responses. As a result, the U.S. Food and Drug Administration approved both of these novel drugs on an accelerated basis for advanced melanoma in late 2014. And these game-changing checkpoint inhibitors are now barreling toward the non-small cell lung cancer market, and are in pivotal trials for dozens of additional hard-to-treat tumor types such as bladder, liver, head, and neck cancer.

Another rapidly-emerging branch of the immuno-oncology tree is an area known as chimeric antigen receptor (CAR) transduced T cells. CAR-Ts are made by first extracting a patient's T cells from the blood and then using a viral vector to get the cells to express a receptor associated with a specific cancer antigen. The modified cells are then infused back into the patient, where they are then able to recognize and eliminate the cancerous cells of interest.

While this approach to fighting cancer sounds great, the clinical results have been a mixed bag so far. The first-generation therapies proved to be highly efficacious -- especially in blood-based disorders such as B-lymphoid malignancies -- but they came with an unacceptable safety profile, even killing some patients.

Companies like Bellicum Pharmaceuticals (BLCM -0.82%), Kite Pharma (NASDAQ: KITE), Juno Therapeutics (JUNO), Novartis (NVS 3.63%), and Ziopharma (ZIOP 6.76%) are all developing a second-generation of CAR-Ts with the stated goals of improving their safety profile and making them more potent against a wider range of cancers. And if all goes according to plan, the first CAR-T therapy could be on the market as soon as 2017.

How much do cancer immunotherapies cost?
Like most new cancer drugs, immunotherapies are mind-blowingly expensive. The annual cost of Keytruda and Opdivo, for example, are each estimated to be in neighborhood of $150,000. Making matters worse, Opdivo is currently indicated as a co-treatment for advanced melanoma with Yervoy, putting the total annual price in the area of $370,000. The prostate cancer immunotherapy Provenge is also incredibly costly, with a price tag of $175,000 for a typical three-month course of treatment. While the projected costs of the forthcoming CAR-T therapies haven't been announced yet, they will probably all top $100,000 a year based on the current pricing points for immunotherapies in general.

Where is cancer immunotherapy headed?
The future of immunotherapy is undoubtedly going to be combination treatments. A key lesson from the early success of Opdivo and Keytruda is that they tend to work really well in patients that express a lot of a transmembrane protein known as PD-L1, or programmed death ligand 1. Given that this encompasses only about 20% to 40% of patients depending on the tumor type, the next step is to explore the use of other monoclonal antibodies with different therapeutic targets, in conjunction with PD-L1 inhibitors.

Big pharma has also become keenly interested in exploring the use of various immunotherapies with more traditional treatments like radiation and all-oral therapies. Indeed, these are primary goals in the emerging clinical programs of immunotherapy leaders such as AstraZeneca (AZN 3.80%), Pfizer (PFE 3.00%), and Roche (RHHBY 4.07%). And that's why some industry experts believe that immuno-therapies could gobble up a noteworthy 60% of the entire cancer drug market within the next decade, making them a potentially disruptive new technology in the battle against cancer.