The stock market rallied on Tuesday as Americans headed to the polls to vote in the presidential election. The Dow Jones Industrial Average (DJINDICES:^DJI) was up about 1.75% at 2:10 p.m. EST. The rally comes despite daily cases of COVID-19 remaining near record levels in the United States. Johns Hopkins University reported over 84,000 cases for Monday.

Shares of Walmart (NYSE:WMT) and Nike (NYSE:NKE) rose along with the market on Tuesday. Walmart announced that it was ending a program where it used robots to take inventory, and Nike increased the number of planned job cuts as it reorganizes around direct-to-consumer sales. 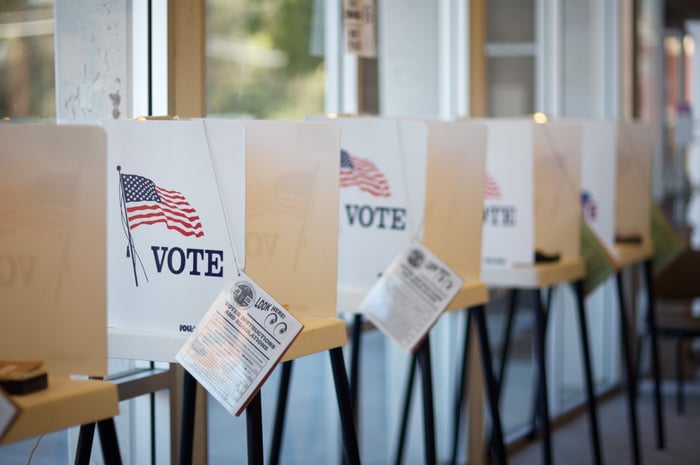 Walmart dials back automation in stores

Tracking inventory in a cavernous big-box store is time consuming. For the past few years, mega-retailer Walmart has been working with Bossa Nova Robotics to use robots to automate that task. The robots would roam the aisles and scan shelves to provide inventory information. The promise of the technology was to remove a labor-intensive task that must be periodically done in Walmart's stores.

This effort to replace humans with robots appears to be a dud. Walmart said on Monday that it was abandoning the initiative, ending its partnership with Bossa Nova. An unintended side effect of the pandemic is one reason for the change: Walmart now has more employees picking items from shelves for online orders, which gives the retailer data on any inventory issues.

Walmart's sales have surged during the pandemic, and its online sales have boomed. Total U.S. e-commerce sales nearly doubled in the second quarter, driven in part by the company's popular online grocery pickup and delivery services. Those orders are fulfilled from stores, as opposed to standard online orders which may be fulfilled from warehouses.

Walmart stock rode the market higher on Tuesday, up about 1.4% in the afternoon. Shares of the retailer are up around 20% this year, but the lack of new economic stimulus could negatively affect its sales growth and eventually lead investors to punish the stock.

Footwear and apparel giant Nike was already planning to eliminate 500 jobs at its headquarters in Oregon as it adjusts to the pandemic. The company said on Monday that it had increased that number to 700 jobs.

Nike's business has largely rebounded from the pandemic, with overall sales flat adjusted for currency during its fiscal first quarter. But the way the company generates its revenue has shifted. Digital sales soared 82% in the first quarter, while total direct sales jumped 12%. Direct sales accounted for about 35% of the company's total sales.

The layoffs aren't being carried out due to weak demand, but instead due to a strategy shift that will put more emphasis on direct-to-consumer sales. Of course, soaring cases of COVID-19 and a weak economy could hurt demand for Nike's products over the next few months. But for now, the company is performing well in a difficult environment.

Shares of Nike were up 1.3% by Tuesday afternoon. The stock has jumped 22% this year, and it trades close to its all-time high.