Michelin, the tire company, makes tires. There is no Wall Street talk of the company's tangential markets, optionality, or subscription-based platforms. It just sells tires. And it sells them for every kind of vehicle, from bicycles to earth movers to airplanes.

Exelixis (NASDAQ:EXEL), despite being a drug company, is a lot more like Michelin than you might expect at first glance. The company's drug cabozantinib, which is marketed under the name Cometriq, was first approved in 2012 as a treatment for thyroid cancer. After a key clinical-trial failure that could have been a catastrophe, management chose instead to see how the drug performs against many different types of cancers, partnering with several other drugmakers in the process. In fact, cabozantinib is part of more than 100 ongoing or planned clinical trials against 15 different types of cancer.

The question for investors is what all those studies mean. Is cabozantinib a superdrug, effective against many different types of cancer? Or is Exelixis just desperate -- a company with only one product that is trying nearly anything it can to stay in business? 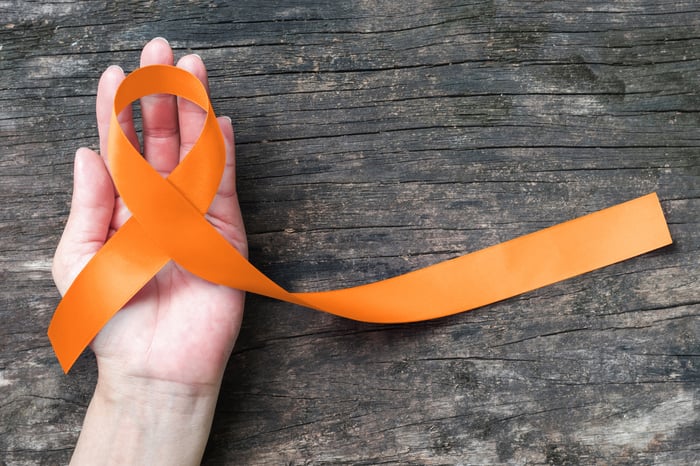 Founded in 1994, Exelixis accepted $195 million from Bristol Myers Squibb in 2009 to co-develop cabozantinib. When Bristol Myers Squibb subsequently decided to bail on the deal in favor of its own cancer drug, the CEO of Exelixis left the company to run Biogen. But the new leadership team persisted, and the U.S. Food and Drug Administration (FDA) approved Cometriq in 2012 for a small subset of thyroid cancer patients (only about 4% of those with the disease).

But while its potential as a thyroid cancer treatment was limited, Cometriq's intended market, prostate cancer, was a $1.6 billion opportunity. The company took aim at that market in 2014, but in a key clinical trial, Cometriq only extended the lives of patients by an average of one month -- not a statistically significant result. Shares fell by more than 50%, and Exelixis management laid off 70% of its workforce.

For many companies, that clinical trial failure would have been the end of the line. But Exelixis adopted a prolific new partnership strategy, one that could be referred to as a "shotgun approach."

The climb back, and a hopeful future

In the years since that trial failure, the company has been resilient, signing agreements with multiple marketing partners, continuing to leverage cabozantinib, and working to develop new drugs. And those efforts are producing results. The company co-developed another drug, cobimetinib, with Genentech (now part of Roche Holdings) in 2015; the FDA has approved it as a treatment for various forms of skin cancer. In 2016, a tablet form of cabozantinib, marketed as Cabometyx, was approved for patients with renal cell carcinoma. And in January 2019, the FDA approved Cabometyx for the most common type of liver cancer. Revenue has grown from a paltry $25 million in 2014 to almost $1 billion today. 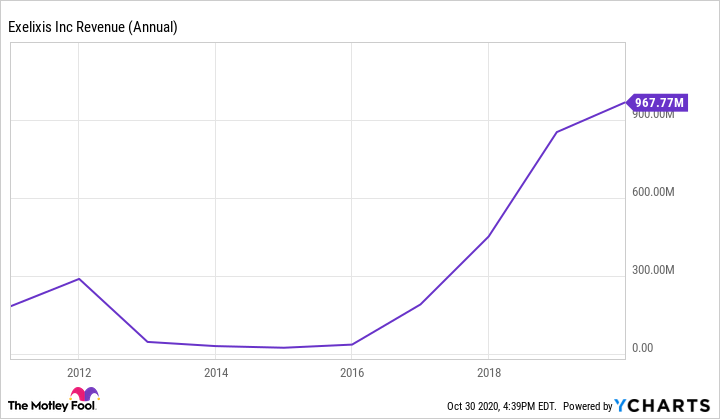 Just this month, the FDA granted a priority review for the combination of Cabometyx with Bristol Myers Squibb's Opdivo as a treatment for patients with advanced kidney cancer. In a clinical trial, participants taking the combination had a median survival duration of 16.6 months -- double the 8.3 month median of those using Pfizer's (NYSE:PFE) Sutent.

Should investors dwell on Exelixis' past reliance on one drug, or look toward the future as management places bets across multiple partners and types of cancers? The company is working to reduce its reliance on cabozantinib, with 20 drug discovery programs now running. And in 2019, management announced that its first internally discovered compound since 2009 had begun a phase 1 clinical trial.

But despite the company's progress, Exelixis is still mostly a bet on a more-than-decade-old drug. Partnerships have been a wonderful way for the company to survive, but there's a limit to how much sales growth can be had from providing incremental improvements to patient outcomes as part of a combination of treatments. I see Exelixis as a survivor for sure -- but not one that will beat the market in the years ahead.

Editor's note: This article has been updated.