If you're feeling anxious about the U.S. election, you're not alone.

The only thing both sides of the political aisle seem to agree on is that this feels like the most consequential election in modern American history. According to a survey conducted by nonprofit Braver Angels, 70% of Americans believe that "If the wrong candidate wins, America will not recover."

For investors, devising a strategy around such a pivotal moment is challenging. There are certain stocks that look poised to go up if President Donald Trump wins and another group that is likely to benefit if Democratic nominee Joe Biden wins. But one potential outcome is that no clear winner is known for several days as the number of mail-in ballots has soared due to the constraints of the pandemic and counting could take time. That could lead to any number of unprecedented situations. 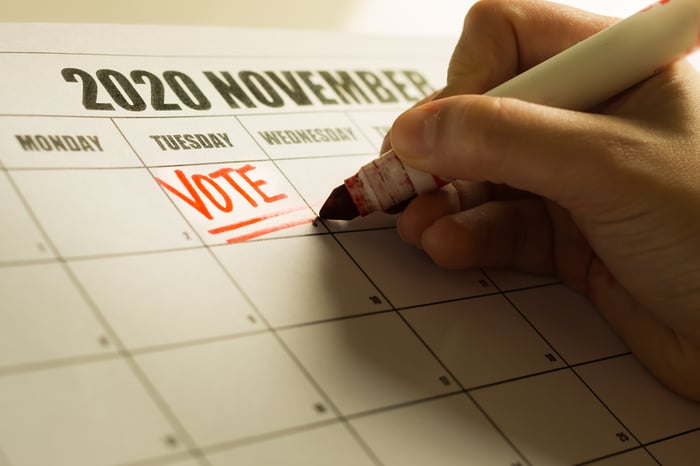 In fact, betting on post-election chaos might be a better bet than assuming that tensions will cool. A recent YouGov poll found that 56% of voters believe there will be "an increase in violence as a result of the election."

During such uncertain times, one sector thrives unlike almost any other. Investors fearing chaos and violence spiraling from the election should take a look at gun stocks like Sturm, Ruger (NYSE:RGR) and Smith & Wesson Brands (NASDAQ:SWBI), two publicly traded handgun makers, and Vista Outdoor (NYSE:VSTO), a maker of ammunition and gun accessories.

A hedge on political tensions

Gun sales have already begun to rise in anticipation of civil unrest. FBI background checks have been elevated for much of the year as tensions around, first, the pandemic, and then protests following the killing of George Floyd, sparked a run on guns. More recently, the upcoming election seems to be the primary motivator for gun buying as background checks, often seen as a proxy for gun sales, have soared. In October, FBI background checks rose 38% to 3.3 million, following a 31% rise in September to 2.9 million.

Not surprisingly, these three gun stocks have already been big winners this year, especially Smith & Wesson and Vista Outdoor, as you can see from the chart below. 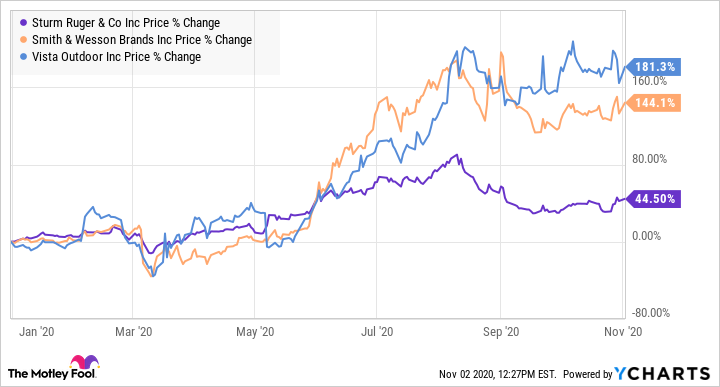 "Consumer demand showed no signs of letting up during the quarter as concerns about personal protection and home defense were stoked by civil unrest in some cities around the United States, the call, by some, for the reduction in funding and authority of law enforcement organizations, and the continuing COVID-19 pandemic," CEO Chris Killoy said in a statement. "As a result of this unprecedented demand, inventories remained significantly reduced at all levels in the channel during the third quarter."

Killoy did not comment on the election, but the political tensions, especially around issues like defunding the police and protests over police violence, seem likely to be a tailwind no matter what happens with the election. The biggest challenge for gun companies like Ruger may be production constraints at this point, as demand has been very robust.

Smith & Wesson hasn't reported earnings since early September, but in that quarter, which ended July 31, revenue more than doubled and firearms sales, which make up the bulk of its business, rose 141% to $230 million. Its bottom-line results went from a $2.1 million loss in the quarter a year ago to a $48.4 million profit.

At Vista Outdoor, which is less sensitive to gun sales, revenue (adjusted for the sale of its Savage firearms brand in 2019) jumped 17% to $334 million, and adjusted gross profit soared 71% to $85 million.

A Biden win would be a boon, too

While tensions around the pandemic, racial injustice, law enforcement, and politics have all led to a surge in gun sales this year, the prospect of a Democrat in the White House often leads to a spike in gun-buying on its own, and if Biden wins, gun sales are likely to boom. Democrats tend to favor gun control policies, and Biden has some proposals, including a ban on assault weapons, and a policy for universal background checks, which could prompt a run on such weapons as buyers fear prohibition. Biden also plans to hold gun manufacturers accountable and civilly liable like mass shootings, which could have long-term consequences for gun makers. Still, that legislation has been defeated before and the gun industry has unique protections because of the second amendment.

Gun sales soared after Barack Obama was elected president in 2008 with FBI background checks rising 42% to 1.5 million, and firearm sales had a sustained uptick through Obama's eight-year tenure, jumping again on his reelection and after mass shootings like the Sandy Hook Elementary School shooting on fears that gun control legislation would follow. Conversely, gun sales slumped after Trump won the election in 2016.

A Biden win would likely prompt a similar response from gun buyers to the Obama election, especially given the polarization and tensions already ripe in the country.

Performance at gun manufacturers tends to be highly cyclical and reflects broader issues around politics, personal safety, and gun laws rather than the gun cycles, but these companies could see sustained growth, barring a stringent crackdown on the industry or expensive lawsuits, as the other issues that have driven a spike in sales aren't likely to go away.

Based on their current-year forecasts, these stocks look cheap. Analysts expect Smith & Wesson to earn $2.42 this fiscal year, giving it a price-to-earnings ratio of just seven. Even if profits cool after that, the gun maker can use those earnings to buy back stock or reinvest in the business, which would help boost the stock over the long term. Ruger and Vista Outdoor both trade for higher valuations than Smith & Wesson, but similarly stand to benefit from a post-election windfall, if not sustained growth, over the next few years, which would be likely under a Biden administration.

Across major cities, buildings are being boarded up in anticipation of potential election violence, one more reminder that this is an unprecedented time. The stock market would almost certainly fall on extended uncertainty about the election winner or violence and chaos on the streets, but Smith & Wesson, Vista Outdoor, and Sturm, Ruger will gain on those tensions, and are set up for long-term gains on a Biden victory.

With volatility lurking around every corner, these stocks stand ready to deliver.