The stock market moved sharply higher on Wednesday, reacting to the slow trickle of news about the U.S. presidential election. As of the market close on Wednesday afternoon, there had not yet been any definitive announcement of a winner for the White House. It appeared likely that results from every state would be necessary to prove the election's outcome, and that could mean several days of waiting as different jurisdictions go through their own local processes and procedures. Nevertheless, the Dow Jones Industrial Average (DJINDICES:^DJI), S&P 500 (SNPINDEX:^GSPC), and Nasdaq Composite (NASDAQINDEX:^IXIC) were up between 1% and 4% on the day.

The gains for stocks were reasonably widespread, with a big advantage in advancing stocks over decliners. Nevertheless, there were two very different groups of stocks that shared one thing in common: they both fared poorly in the aftermath of the election.

The first set of losing stocks on Wall Street came from the banking industry. JPMorgan Chase (NYSE:JPM), Bank of America (NYSE:BAC), and US Bancorp (NYSE:USB) were all down between 3% and 5%.

Despite the stock market's big upward move in response to the way the election seems to be playing out, bank stocks  reacted negatively to the flight among investors to the safe haven of the bond market. Bond yields plunged as investors bid up the prices of Treasury securities.

Lower bond yields are bad for banks because they typically rely on the spread between the interest rates they pay on savings accounts and the rates they charge borrowers to lend. Falling yields squeeze that net interest margin, leaving banks with less to add to their overall profit.

One thing to note, though, was that banks with less of a retail focus fared better. Investment banking giants Goldman Sachs (NYSE:GS) and Morgan Stanley (NYSE:MS) were flat to slightly up on the day. Shareholders appear to be looking at the prospects for deal-making to continue at its recent pace, bolstering profits to offset weakness on the retail banking side of the business. 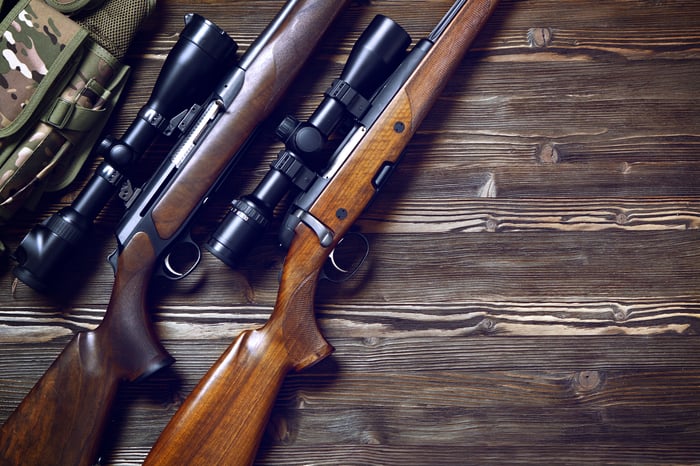 A bad day for gun stocks

The other big losses on Wall Street came from gun stocks. Smith & Wesson (NASDAQ:SWBI) lost 12% on the day, while Sturm, Ruger (NYSE:RGR) followed up with an 11% drop.

The logic for gun stock investors during elections typically runs something like this: If the federal government will be in the control of those who want to impose greater regulation on gun ownership, then gun stocks jump, because investors anticipate that firearms enthusiasts will panic-buy weapons in anticipation of bans or other limitations.

Conversely, when those more favorably inclined toward gun ownership are in power, gun stocks do worse, because there isn't any immediate need for gun shoppers to buy weapons. It's that second line of thought that appears to be working today, as the likelihood of a divided government in Washington appears much higher than it did coming into the election.

Today's assessment of the likely political environment come 2021 could well be in error. But at least for now, gun stock investors think that the need to buy arms is less than it was yesterday.