Your goal as an investor is to grow wealth -- both for the near term, as well as the future. But the wrong moves on your part could set you back and cause you to lose money in the stock market rather than accumulate it. Here are three investing mistakes you should steer clear of at all costs.

1. Unloading investments out of panic

Like many investors, back in March, checking my stock portfolio was downright depressing. Once news of the coronavirus pandemic hit, stocks took a major tumble sparing neither my brokerage account nor my retirement savings. At the time, a lot of people were no doubt contemplating dumping their stocks, but because I'd been investing for years and had been through that sort of downturn before, I knew not to panic. 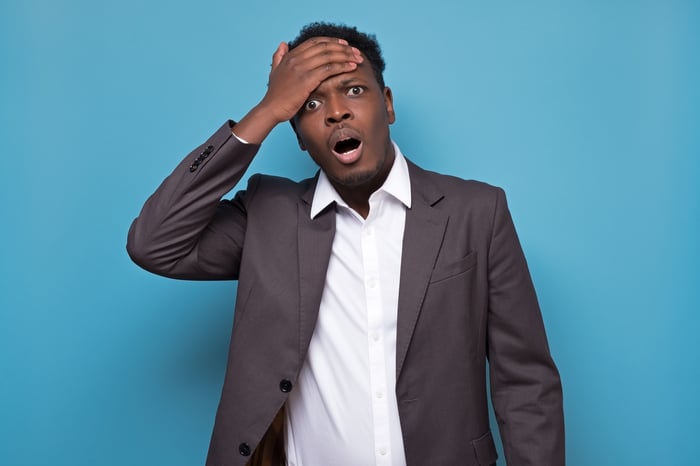 A friend of mine wasn't so lucky. He dumped some stocks in mid-March and took a loss -- only guess what happened? By August, my portfolio had regained its value, whereas he was stuck with that loss on his hands.

The point? Stock market crashes happen. Corrections, where the market loses at least 10% of its value, are very common.

But what's just as common are stock market recoveries. It's for this reason that you shouldn't sell off investments in a panic the moment things go south. If you sit tight and wait things out, you're likely to not only avoid losses, but also come out ahead.

2. Trying to time the market

Back in March, a lot of investors with money to spare attempted to do something that's historically failed: time the market. And I'll admit, I tried to do it myself, too. (Spoiler alert: It didn't work out.)

Timing the market -- attempting to scoop up stocks when they're truly at a low -- often means missing out on key opportunities to buy. A better approach to investing is a strategy known as dollar-cost averaging, where you commit to putting a certain amount of money into specific investments at preset intervals. With this system, you're buying the same stocks consistently, and doing so increases your chances of scoring a lower average share price than market timing allows for.

Years back, I remember being thrilled to glance at my portfolio and see that a certain stock I owned was up substantially. My first inclination was to sell -- the stock had soared during the year and I wanted to cash in before its price dropped. But then I remembered that I'd only held that stock for about 11 months, and I held off on selling for one big reason -- to avoid getting slapped with short-term capital gains taxes.

Whenever you sell investments for more than what you paid for them, the IRS gets a piece of your profits. If you hold stocks for a year or less and sell, you'll face short-term capital gains, which are taxed as ordinary income. But if you hold stocks for at least a year and a day before selling, you'll fall into the long-term capital gains category, which comes with a far more favorable tax rate. As such, if you're thinking of selling stocks in the near term, figure out when you bought them first, and make sure you're not setting yourself up for a higher tax bill than necessary.

As investors, we're all prone to mistakes, but knowing which ones to avoid can help you grow wealth rather than lose it. Steer clear of the above blunders, and you'll set the stage for a successful investing career.