The premise makes enough sense. The expansion of curbside pickup in the age of COVID-19 -- along with the growth of online orders -- means more grocery store employees are needed. At the same time, since consumers are shopping online, at least some of them will hunt for the lowest prices. Smart food retailers will make a point of being price-competitive.

As it turns out though, grocery store operators like Kroger (NYSE:KR) and Albertson's (NYSE:ACI) aren't being overwhelmed by new expenses.

That's not to say they haven't seen their costs go up. They have seen their operating spending increase. Those increased costs, however, have only more or less mirrored their respective increases in revenue. The coronavirus pandemic has evenly scaled up the size of grocers' operations. 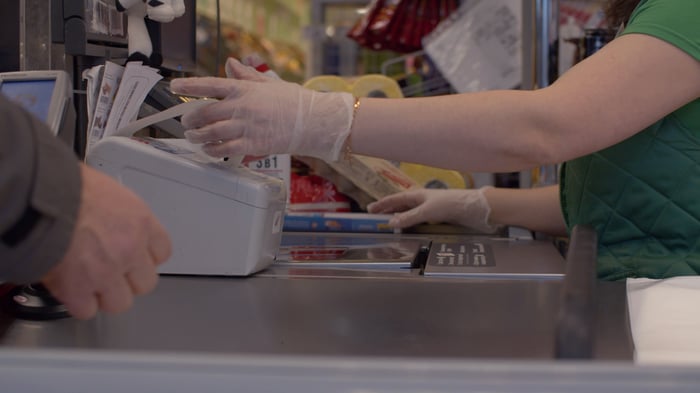 Three major grocery names in the U.S. have posted results for what most closely aligns with the third calendar quarter of the year. That's a timeframe that covers results beginning a few months after COVID-19 made landfall in the United States, but also a period when the effect of the pandemic was in full force. In other words, their most recent quarters serve as a look at how each name fared after adequate time to develop a response to the contagion. That's (primarily) more curbside pickup sites and in-store fulfillment of online orders.

So how much more did all of these added services cost these companies? Not much.

Take the recently reported fiscal second-quarter numbers from Kroger as an example. For the three-month stretch ending in mid-August, its cost of sales as a percentage of revenue fell by a little less than a percentage point, while its selling, general, and administrative expenses grew around 30 basis points year over year. The end result was improved profits and improved profit margins. 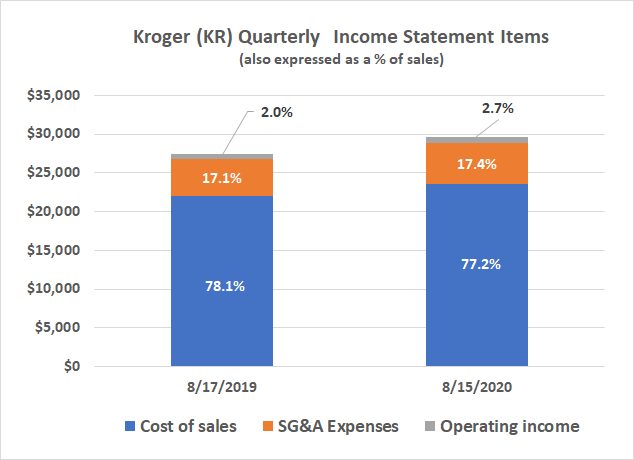 Walmart (NYSE:WMT) saw similarly small changes in its relative costs for the quarter ending in July. Selling and administrative expenses were up 7.9% year over year, while merchandise costs grew by a smaller 4.9% year over year. In that the retailer's cost of goods sold is the bigger expense of the two, however, the company's 5.6% top-line improvement translated into an 8.5% year-over-year increase in operating income. 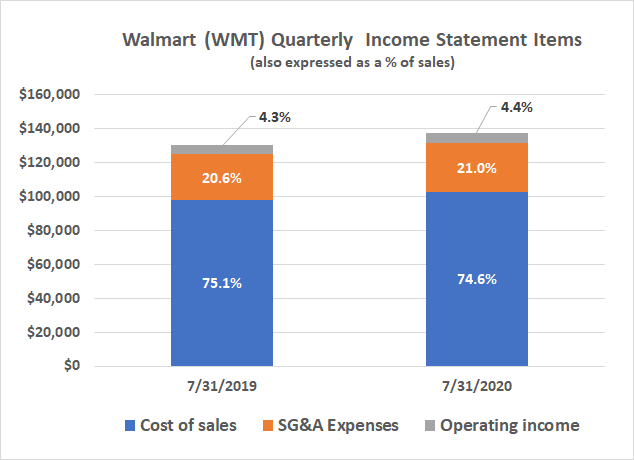 Even a relatively smaller Albertson's has thrived rather than buckled under big changes in the grocery marketplace. In fact, it's benefited more than most. Though its top line grew 11.2% on a huge e-commerce improvement, its merchandise costs were only up 9.3%, while its selling and administrative spending only grew 6.2% year over year. That led to a triple-digit percentage increase in operating income, producing profit margins more in line with its much bigger rivals. 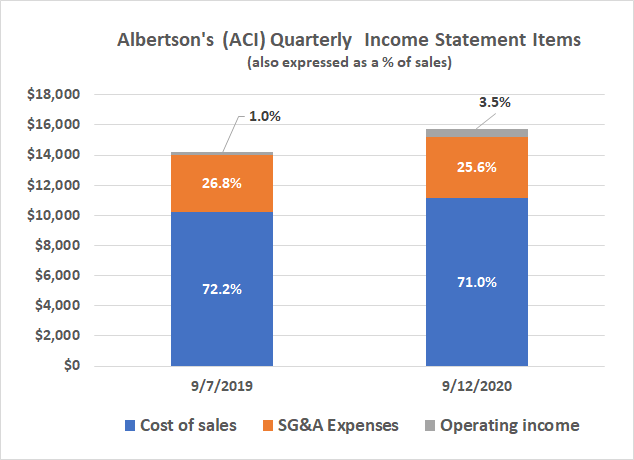 These are important comparisons.

More than a few discussions of late have focused on the costs related to adaptations to the new normal. Costco (NASDAQ:COST) CFO Richard Galanti, for instance, questions whether or not the potentially added sales justify the added expense of offering curbside pickup stalls.

Analysts have expressed cost concerns too. Accenture's global head of retail Jill Standish wrote for Chain Store Age in May, when the pandemic was still young, that the nascent surge in online shopping opportunity "brings with it a higher operating cost structure, which can impact margin." And this may still be a worry for non-grocery retailers that have ramped up their online efforts, added curbside pickup, and use stores as fulfillment centers.

At least for the grocers, and mostly-groceries names like Walmart, adapting to the environment by adding contactless shopping options hasn't proven uncontrollably expensive.

There is one thing to watch on this front, however. That's the likely scale-back in the usage of online grocery shopping and curbside pickup once the coronavirus pandemic is in the rearview mirror. Grocery retailers will have to pivot resources back into serving more walk-in shoppers, though such a pivot won't necessarily be an easy one.