Sure, there may have been terrific news on a vaccine last week, but just because a vaccine may be available sometime next year doesn't mean the growth of video games will come to an end. Like many technology trends, video games were already a growth industry before COVID, and they won't be going away any time soon. With COVID cases spiking in the U.S. and across the world, video game stocks should experience another sales boom this holiday season.

One of the big beneficiaries this year has been Japanese game giant Nintendo (OTC:NTDOY), which just delivered blowout earnings results two weeks ago. But is the Nintendo Switch console boom sustainable? 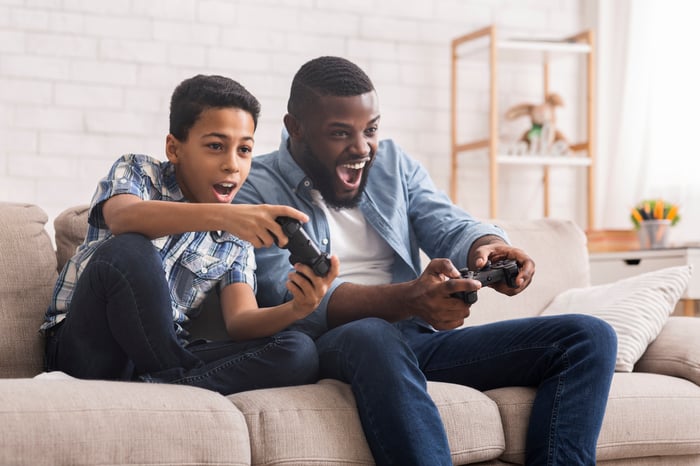 Through the first six months of fiscal 2021 ending in September, Nintendo saw sales jump 73.3% and operating profits more than triple, increasing by 209.3%. This is somewhat amazing, since the current Nintendo Switch console is already more than three years old.

Still, people can't seem to get enough of the Switch. Since its launch in early 2017, the Switch has sold over 63 million units, according to internal estimates. That includes 12.53 million units in the first half of this year, up 81% compared to 2019, with the standard Switch up 68% and the newer Switch Lite up 114%. Software units followed suit, up 71.4%. Nintendo has also sold a remarkable 20 different software titles that have sold more than one million units, four times the amount of one-million-unit third-party titles.

As a result of the blockbuster results, the overly cautious Nintendo management raised its guidance for the year.

Nintendo's initial outlook for fiscal 2021 was incredibly conservative. Management initially forecast slight declines for the third year of the Switch cycle. However, that always seemed like low-balling, given that the Switch has remained very strong ever since its launch and it gained new momentum during the pandemic. That may be due to management's memories of the Wii U, the 2012 console launch which wound up being a huge flop.

In a boon for dividend investors, Nintendo boosted its estimated dividend by 50%, and the revised payout estimate would yield a solid 2.3% at today's share price; pretty good, especially in this low-yield environment.

But can Nintendo keep it up after rival console launches and a vaccine?

With Nintendo's stock up 34% on the year, some may wonder if the current results are as good as they're going to get.

There are admittedly a few potential headwinds coming up. Rival video game platforms the PlayStation 5 and the Xbox Series X are just hitting stores this holiday season. Furthermore, after the positive news on Pfizer's (NYSE:PFE) vaccine, some may wonder if video game sales might dip in calendar 2021. Nintendo's valuation has also surged to around 21.6 times this year's net profit estimate, which could be the top of the cycle.

Still, the Switch momentum could very well continue. Management's updated forecast, while higher, may still be conservative. After all, the company has already sold 12.53 million units, over half of this year's 24 million unit estimate, and we haven't even hit the holiday quarter as of yet. Furthermore, in the earnings Q&A session, Nintendo President Shuntaro Furukawa noted that Switch momentum was helped by the breakout hit Animal Crossing: New Horizons as much as the pandemic:

Moving forward, we will continue efforts to extend the Nintendo Switch life cycle, while promoting initiatives that make use of Nintendo Accounts and pursuing our goal of motivating consumers to play our platforms for years to come. The dedicated video game business is based on consumers buying the hardware and then also purchasing software, so Animal Crossing: New Horizons becoming a major hit and encouraging hardware purchases among so many consumers goes beyond impacting the business this one year and is extremely significant to the overall Nintendo Switch life cycle.

Nintendo has also sharpened its toolbox recently, not only by executing well on producing hit games -- with more coming in the holiday quarter -- but also beginning to use  its IP to expand into mobile and other alternative entertainment platforms such as movies. My colleagues Keith Noonan recently commented on the success of the mobile adventure Pokemon: Go, and Leo Sun noted a Mario Bros. movie is slated for 2022. Meanwhile, there's talk about a premium edition of the Switch being released next year. All of these factors could either extend the current Switch cycle or add new revenue streams.

Basically, while Nintendo stock isn't as cheap as it once was, its sterling execution and potential for ancillary revenue streams should continue to buoy results -- even with tougher competition and a vaccine in the future.