Nintendo's (OTC:NTDOY) Switch console sold more units in the third quarter than any other piece of video-game hardware since 2009, according to new data from NPD Group and its analyst Mat Piscatella. The last console to put up better numbers in Q3 was Nintendo's own DS handheld system, which went on to sell more than 154 million units worldwide.

Overall, it was a good quarter for the U.S. video-game industry. with spending from July through September climbing 24% year over year to reach $11.2 billion. Nintendo is facing new competition with the recent launches of Microsoft and Sony's respective next-generation consoles. But new hardware from competitors probably won't do much to stem Switch's momentum in the near term. 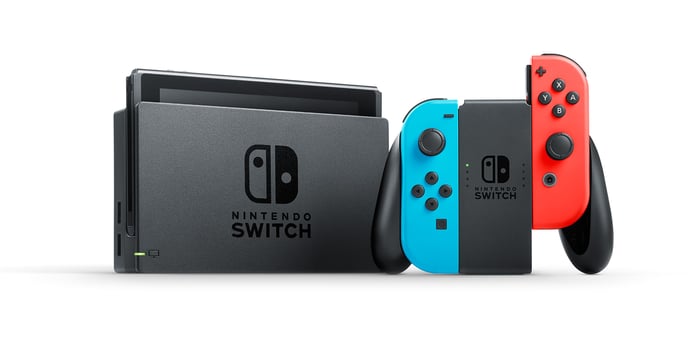 What's next for Nintendo and the Switch?

Nintendo's Switch console has been a massive hit since launching in March 2017. It's now sold more than 68 million units worldwide and is on track to be one of the company's most successful platforms ever. The console has helped Nintendo post fantastic sales and earnings growth, with revenue up 73% year over year across the last six months and operating income rising 209% compared to the prior-year period.

The Switch's incredible Q3 sales performance is made even more impressive by the fact that Nintendo didn't release a major new first-party game in the quarter. Nintendo's games are typically the biggest sales drivers for its own video-game hardware, and fantastic momentum for the console last quarter bodes well for the system heading into the crucial holiday sales period.

Some reports suggest that the company will try to keep the Switch's momentum going with the launch of a new, premium edition of the console next year. Nothing official on that front has been announced, but it would be a smart move.