Citigroup's (NYSE:C) new chief administrative officer, Karen Peetz, made her first public appearance earlier this month at Bank of America's Future of Financials Conference. Peetz joined Citigroup in June and is tasked with overseeing the bank's project management office and its regulatory engagement globally. She will likely play a big role in helping Citi correct some of its regulatory woes with internal controls that recently led regulators to issue multiple consent orders.

While there is still little detail about how much the corrective actions will cost or how long the process will take, I think some of Peetz's comments are worth a second look. 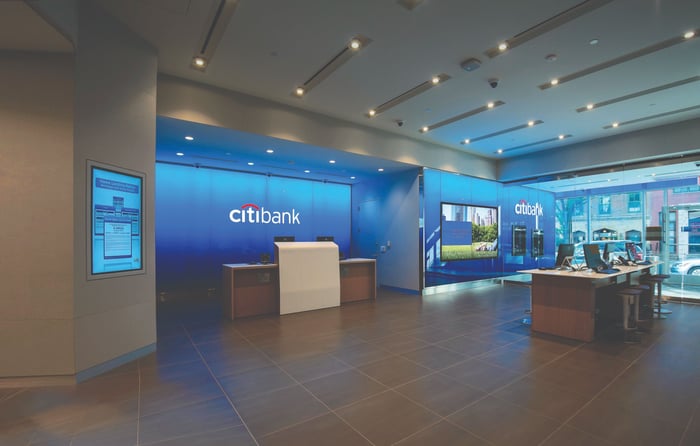 In October, regulators hit Citigroup with multiple but related consent orders that included a $400 million fine for deficiencies with the bank's internal controls related to compliance, data, and risk management. Some of the deficiencies date back to 2013 and 2015, but it probably didn't help that earlier this year, Citigroup accidentally wired $900 million to several Revlon creditors as a result of what the bank called a "clerical error" and "out-of-date" software. Then CEO Michael Corbat announced his retirement sooner than expected, and the consent orders came shortly after. Since all of this happened, investors have been trying to figure out not only how Citigroup plans to address all of these problems, but also how deep the issues go.

Peetz said a few things at the Bank of America conference that stuck out to me. One positive thing she said was that she was grateful regulators did not limit the bank's growth in any way like it had some of its peers'. This is a direct reference to Wells Fargo. After the bank's phony-accounts scandal, the Federal Reserve placed an asset cap on the bank, restricting Wells Fargo from exceeding $1.95 trillion in assets. The Wells Fargo asset cap is now considered one of the costliest penalties on a bank ever.

Since the surprise consent order, some investors and analysts have asked Citigroup if it could end up being the next Wells Fargo. Corbat told investors on the company's third-quarter earnings call that he didn't think this would be the case, but it's good to hear Peetz reinforce that view nearly a month later, especially with how unpredictable this situation has been.

On the other hand, Peetz also said the bank was "heartened" that the consent orders mentioned that Citigroup had already done a lot of the necessary work. While Citigroup has said that it has already spent $1 billion alone in 2020 to try to correct some of these issues, I find it improbable that Citigroup is anywhere near the finish line on this.

First of all, Corbat said on the third-quarter earnings call, "This won't be a quick or easy fix." Second, it's hard to believe that the bank could accidentally wire $900 million to the wrong people and be close to having fixed its internal controls. And third, there has been very little detail on what the bank needs to do to get into compliance with the orders. The bank is still likely conducting all of the necessary analysis this quarter, and remember that the consent orders said some of these issues date back to 2013 and 2015, so it would appear that some of these issues are not easy to figure out.

It was good news to see Peetz say again that Citigroup is not the next Wells Fargo and is likely not facing any kind of asset cap, because that kind of punishment is severe. Unfortunately, I think it is going to be hard to feel like Citigroup is anywhere close to resolving some of its internal controls issues until the public knows what needs to be done, how much it will cost, and how long it will take.