That's impressive, to be sure, but is it justified? Here's what investors need to know about NIO's potential and why it could be the next Tesla (NASDAQ:TSLA). 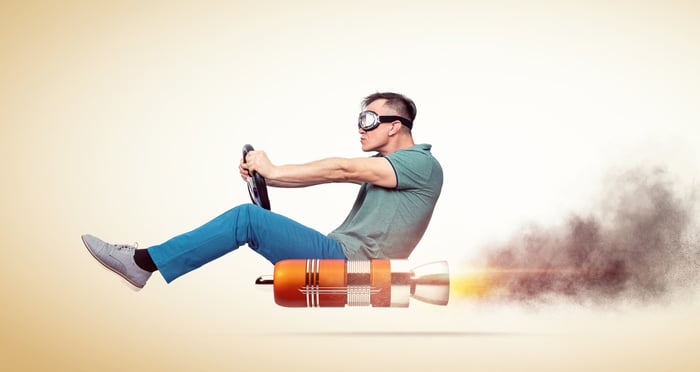 NIO has benefited from a lot of hype around the electric vehicle (EV) industry. Splashy stock market debuts from companies like Nikola (NASDAQ:NKLA) have generated a buying frenzy among EV investors. It's tempting to lump NIO into the same class as start-ups like Nikola and Lordstown Motors (NASDAQ:RIDE), but there are a few key differences.

NIO went public in late 2018, well before the current wave of electric car IPOs. Unlike Nikola and Lordstown, NIO is already producing electric vehicles. Taking a page from Tesla's playbook, NIO started with a sports car in 2016 and then quickly transitioned into specializing in electric SUVs, including 2017's full-size ES8, 2019's midsize ES6, and 2020's EC6 "coupe SUV," essentially a crossover SUV.

So, although NIO is currently growing by leaps and bounds, it has a long way to go to justify its current valuation.

Analysts have been questioning the lofty valuation of Tesla -- currently the world's largest automaker by market cap -- for years. While I'm wary of calling NIO "the next Tesla," the company certainly has some similarities with its larger U.S. rival that could bode well for its future.

Much like Tesla, NIO has chosen to focus on a handful of models. Tesla got its Model S sports coupe production up and running before it moved on to the Model X and eventually the Model 3.

NIO's financials also look similar to early stage Tesla's: Revenue is increasing at a rapid clip, and while the company's net income is still negative, it's showing gradual improvement. However, the company's debt load is also increasing quickly. It's worth remembering that Tesla didn't post consecutive quarterly profits until 2018, and its debt load finally peaked (at least for now) at about $13.4 billion at the beginning of this year. NIO investors should expect a long wait before the company achieves profitability.

Thus far, Tesla -- via its Shanghai Gigafactory -- has dominated the Chinese electric vehicle market. However, it's reasonable to expect that the Chinese government will favor domestic EV manufacturers like NIO over foreign companies like Tesla. That could be NIO's secret ace in the hole.

General Motors' sales, though, currently dwarf both Tesla's and NIO's. GM sold more than 3 million vehicles in China in 2019. By contrast, Tesla is on track to sell about 150,000 Model 3s in China in 2020. Even with potential favorable treatment from the Chinese government, NIO has a lot of ground to make up here.

NIO certainly has the potential to live up to its lofty valuation. It operates in an underserved niche in a rapidly expanding market where it has a home-court advantage. However, it's starting from scratch while its bigger and wealthier rivals are building on existing brand recognition and manufacturing expertise.

Ultimately, NIO is a promising but speculative player in the emerging electric vehicle market. Investors who can stomach the risk may want to take a chance on the company, but they should be aware that it will take time before the company can prove itself successful... if ever.

Editor's note: This article has been corrected. NIO has four cars currently in-market: the ES8, the All-New ES8, the ES6, and the EC6. NIO has not disclosed its upcoming models of cars.