Please ensure Javascript is enabled for purposes of website accessibility
Free Article Join Over 1 Million Premium Members And Get More In-Depth Stock Guidance and Research
By Jason Hawthorne - Nov 27, 2020 at 6:30AM

Big shot organizations are recommending against the use of Gilead's antiviral to treat COVID-19.

Treatments haven't gotten the same attention as vaccines in the fight against COVID-19. Until President Trump was infected, most of the news was focused on which big pharma or biotech company would produce an effective vaccine first. Even the government's funding program, Operation Warp Speed (OWS), spent about 20 times the money on vaccines as it did on treatments.

Gilead Sciences ( GILD 0.00% ), along with several monoclonal antibody treatment makers, were thrust into the spotlight when President Trump was diagnosed with the virus. Although the company's antiviral drug, remdesivir, was given some of the credit for his speedy recovery, the World Health Organization (WHO) has held firm that there is no benefit to taking it. Now that Regeneron ( REGN -0.93% ) and Eli Lilly ( LLY 0.44% ) have received Emergency Use Authorization (EUA) from the U.S. Food & Drug Administration (FDA) for monoclonal antibody treatments, where does that leave Gilead? 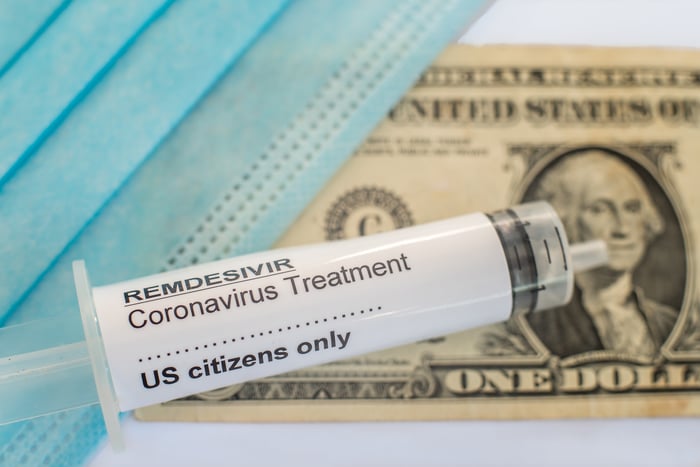 Gilead has decades of experience developing antiviral drugs due to its revolutionary work combating HIV and hepatitis. Remdesivir  -- now branded as Veklury -- was originally evaluated in clinical trials to thwart the Ebola outbreak in 2014. Its early use as a treatment against COVID-19 made sense, because the drug had previously shown an ability to stunt coronavirus replication.

Subsequent clinical trial results have been controversial. The most optimistic study for remdesivir showed a slight recovery time in patients with the most severe cases of the disease, while smaller studies showed no effect. None of the studies showed a reduction in the virus itself. In what would have ended commercialization efforts for most drugs, the WHO published a large study showing no impact on mortality or recovery rate for patients who received remdesivir. So, how does a drug get FDA approval but fail a large clinical study by a preeminent global health organization?

Fake it until you make it

Gilead found out about the disappointing results from the WHO trial in late September. The company didn't mention the WHO study when it signed an agreement in early October to supply the European Union with $1 billion worth of the treatment. Later that month, after results from the WHO study were made public, the company received the first approval from the FDA for any coronavirus treatment. Adding to the confusion, the FDA never consulted a group set up to review data for antivirals -- the Antimicrobial Drugs Advisory Committee -- prior to approving remdesivir. In fact, the group hasn't been convened once during the entire pandemic.

Even earlier analyses were inconclusive at best. A study conducted by the National Institutes of Health (NIH) in late April showed a moderate improvement in recovery time for patients, while a parallel study in China showed no such benefit. A few months later, in August, Gilead published a study showing pneumonia patients treated with remdesivir for five days improved faster than patients receiving standard care. Oddly, the same study showed patients treated for 10 days did not improve faster -- a likely sign the drug wasn't responsible for improvement. With all of this confusion, what could it mean for investors?

A not so complimentary comparison

To many, the approval looks similar to earlier FDA action taken on hydroxychloroquine -- an EUA the agency later rescinded due to lack of effectiveness and serious cardiac events. Similarly, the WHO reported a disproportionately high number of liver and kidney problems associated with remdesivir, and the European Medicines Agency (EMA) has begun investigating instances of acute kidney injuries associated with taking the drug. Earlier this week, the Infectious Disease Society of America revised its guidelines on the drug, advising it be administered only for the most severe patients requiring ventilation, but not for patients who do not require mechanical assistance with breathing.

Despite all of the controversy, remdesivir netted Gilead $873 million in the third quarter of 2020 alone. Earlier this summer, analysts expected the drug to bring in $1.9 billion in 2020 and $7.6 billion in 2022. I think that is unlikely.

While Gilead disputes the WHO data because the study was conducted in countries with different healthcare standards, half of the participants were treated in Europe and Canada -- which are hardly geographies with questionable healthcare systems. Also, as monoclonal antibody treatments become more widely available and more data is analyzed, doctors are less likely to prescribe an expensive treatment with potentially serious side effects unless the benefits are much clearer. Europe may have agreed to pricing in October, but the EMA has yet to give its full approval and is under no obligation to purchase any doses of the drug. For now, it appears the U.S. may be the only place where doctors are regularly prescribing the drug, and I expect that to change as more data on remdesivir and other treatments become available. In my opinion, investors buying shares in Gilead who are counting on sales of remdesivir alone to boost their returns are going to be disappointed.