While "recovery" stocks have been making big moves upwards in November, 2020 has been a year when technology stocks have pulled away from the pack. Yet just because tech stocks have soared this year doesn't mean better things couldn't be in store in 2021.

Here are three top tech names that have each beaten the broader market this year, yet which also have 2021 catalysts that could push them to even greater heights. 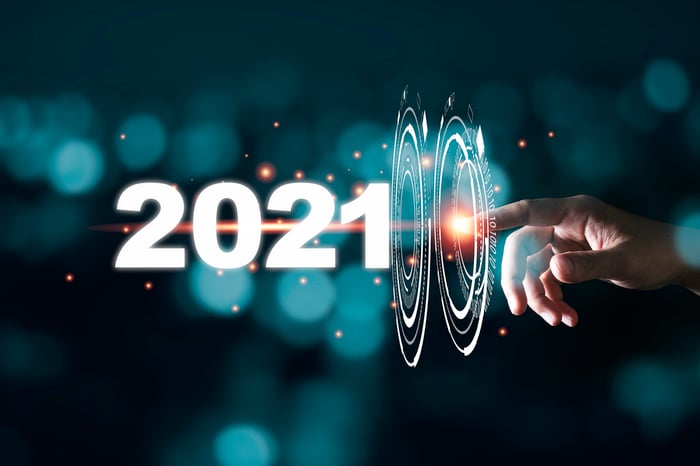 Leading server and computer assembler Dell Technologies (NYSE:DELL) has done rather well in 2020. That's especially impressive, given that Dell mostly sells hardware products subject to the buying whims of businesses and consumers everywhere, and we've been in a recession. Yet last quarter, Dell posted a better-than-expected revenue growth of 3% and, thanks to cost-savings measures, earnings-per-share growth of 16%. The work-from-home trend has boosted consumer laptop sales, and the company's VMWare (NYSE:VMW) software segment has been a steady grower amid all the uncertainty. 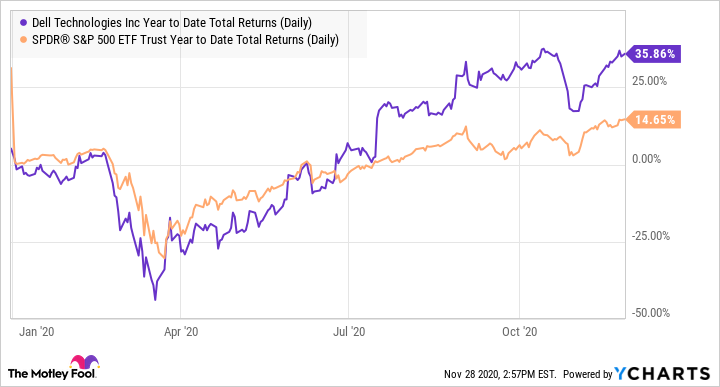 Speaking of VMware, back in July, Dell stated its intention to spin off the rest of its 80.4% stake in VMware later in 2021. Based on VMware's valuation of its publicly traded shares, Dell's VMware stake alone would be worth about $48 billion. Currently, all of Dell is trading for about $52 billion, meaning the market is valuing the rest of Dell at just $4 billion. Considering that the non-VMware portion of Dell has made $4.9 billion in operating income in the first nine months of 2020 alone, that seems quite pessimistic.

Of note, the spinoff would not become tax-free until September 2021. Still, Dell has been gaining in value relative to VMware as we get closer to that date, and that trend should continue next year.

Search giant Alphabet (NASDAQ:GOOGL) (NASDAQ:GOOG) has had a strange year in 2020, but still managed to make impressive 34% gains year-to-date. 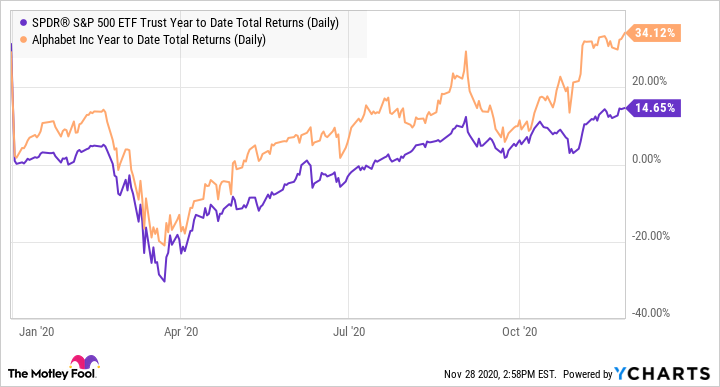 Alphabet doesn't have one specific catalyst like Dell, but rather a few different ones that could come to fruition in 2021.

First, Alphabet's search revenue actually fell in the second quarter amid the pandemic for the first time ever, yet it recovered strongly in the third quarter. As the travel and leisure sectors recover after a vaccine is distributed, look for Alphabet's core search ad revenue to grow even more as the economy gets back to full strength.

Additionally, Alphabet has a few other goings on in 2021. The company agreed to acquire Fitbit (NYSE:FIT) one year ago, in a bid to beef up its personal health and fitness tracking segment. However, Alphabet is still waiting on final approvals from the EU antitrust regulator. Given the EU's tougher stance on big tech monopolies, it's unclear if the acquisition will go through. However, there should be a final answer in the coming months.

Alphabet has also been under fire from antitrust regulators here in the U.S. as well, with the Department of Justice filing suit against Google in October, and more state attorneys general filing their own suits shortly thereafter.  However, these concerns are likely already in the stock price. While Alphabet has done well, it has lagged the other FAANG stocks in 2020. If there's a conclusion to the suits in the new year and Alphabet's potential punishment is less-than-feared, the stock could break even higher.

Finally, European technology investor Prosus (OTC:PROSY), and its majority-owner, South African media firm Naspers (OTC:NPSNY), have each done pretty well in 2020. However, their performances could be seen as relative disappointments. After all, about 90% of both companies' value is tied up in a massive 31% share of Chinese tech giant Tencent (OTC:TCEHY). While both Tencent-owners have outperformed the broader market in 2020, they actually lagged Tencent's performance, which soared 58.6% in 2020: 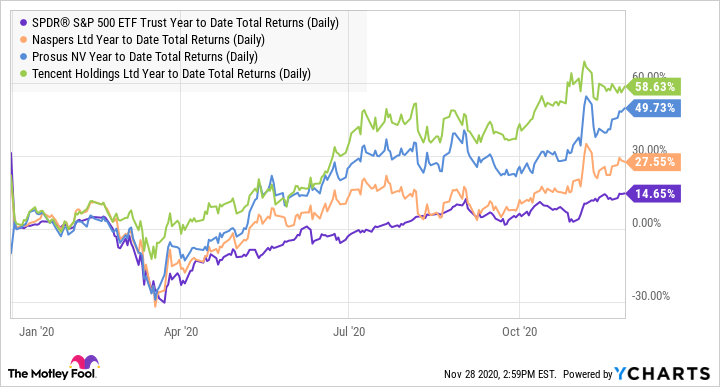 Currently, Prosus trades at a substantial discount to the value of its Tencent ownership alone, despite also owning about $30 billion worth of other international internet businesses in food delivery, online classifieds, digital payments, and education tech.

However, management is taking new steps toward closing the discount. Prosus announced a $5 billion share repurchase last month, which it should be executing as we speak. However, March of 2021 will mark the three-year anniversary of its prior sale of some Tencent shares back in 2018. At the time, Naspers said it wouldn't sell any more Tencent shares for three years.

Even if that doesn't happen, however, Naspers/Prosus management has promised more actions to close the yawning discount going forward. CEO Bob Van Dijk said on the recent conference call, "what I want everyone to take back from this is we're working as hard on [closing the discount] as we are on the business. It's important to us. It's important for our shareholders and we want to make progress. And when we're ready, we'll come back and say that's where this is."

Naspers spun off Prosus in late 2019 and announced its buyback in 2020. Shareholders could look forward to at least one and perhaps more financial engineering actions next year, which will hopefully further close the discount to its prized asset.