Investors should take a deep breath before panic-selling.

The report's authors, including judiciary chairman Jerrold Nadler and antitrust subcommittee head David Cicilline, didn't paint a pretty picture, stating, "Our investigation leaves no doubt that there is a clear and compelling need for Congress and the antitrust enforcement agencies to take action that restores competition, improves innovation, and safeguards our democracy."

The report basically recommended throwing the gauntlet at big tech by breaking up their respective dominant market positions, preventing major acquisitions, and reforming outdated antitrust laws for the modern age.

If you're an investor in any of these big tech companies, as I am, is there a reason to fear the new report? Or should you stay the course?

What the report actually means

This report isn't a law. Written by the subcommittee on antitrust action, it's merely a recommendation to the House of Representatives, which may or may not attempt legislation next year.

Rep. Pramila Jayapal, who represents Amazon's district, said she believes a bipartisan bill would likely be taken up in the first six months of the next Congress. However, if lawmakers have to vote on a stimulus bill or other large priorities, it could get pushed further out. Remember, both houses of Congress would have to pass their bills and have them signed by the president. In addition, the House report was basically written only by the Democratic majority, with many Republican lawmakers declining to sign it.

A middle ground is outlined

There's some overlap between Democrats and Republicans on the matter of big tech, which means at least some sort of legislation could be forthcoming.

Notably, Rep. Ken Buck, a Republican of Colorado, and three other Republican lawmakers wrote a separate report called "The Third Way," which agreed with many of the problems cited by Democrats, but advocated for more restraint. Notably, Buck's report denounced Democratic calls for heavy-handed breakups or other approaches that would embolden lawsuits against these companies. Buck agreed with "about 330 pages of the majority's report," but recommended a more measured approach:

We will work with the Chairman in a bipartisan fashion to help enact the legislative solutions where we can agree ... However, we are concerned that sweeping changes could lead to overregulation and carry unintended consequences for the entire economy. We prefer a targeted approach, the scalpel of antitrust, rather than the chainsaw of regulation.

More specifically, Buck's proposals stop short of breaking up big tech, but rather give antitrust agencies more clout, shift the burden of proof in merger cases to make it more difficult for big tech to acquire competitors, allow users to easily move data in between platforms, and incorporate more expert opinion on predatory pricing.

Buck also advocates for revitalizing the essential facilities doctrine, under which a company with monopoly power must allow competitors reasonable use of their facilities or platforms.

Potential consequences for each company

Most of the focus appears to be on Google's dominance of search and Amazon's dominance of e-commerce. Lawmakers seemed particularly interested in these platforms' ability to take data from their own customers to create their own competitive products.

In addition, lawmakers seem concerned that these companies have acquired competitors in order to dominate their respective fields. Facebook's 2012 acquisition of Instagram and Google's DoubleClick and YouTube acquisitions have drawn special scrutiny. Meanwhile, lawmakers are also concerned that Apple's App store, the sole gatekeeper for iPhone apps, may give it too much power over app developers.

It's hard to picture a scenario in which the government significantly disturbs these companies' current core business models, but legislation could hurt around the edges.

Amazon certainly makes products that sometimes compete with their third-party sellers, but so do most large retailers. Walmart has Sam's Choice and others, Kroger has Simple Truth and others, and Costco has the famous Kirkland private-label brand, to name a few. It's a bit unclear why Amazon is being singled out as the only offender.

Back when Facebook acquired Instagram in 2012 for $1 billion, Instagram was a relatively tiny company with 13 employees. It wasn't a forgone conclusion by any means that Instagram would go on to dominate social media the way it has, particularly without Facebook's internal investments over the years. Plus, if Facebook is so dominant in social media, how has TikTok become such a hit so quickly?

If Congress mandates that Apple separate its app store from its operating system, who's to say that the quality of apps and their integration with iOS wouldn't suffer? If the App store is allowed to remain, what is a fair commission?

Alphabet may face the most antitrust pressure of all because of its ability to take information from third parties and then give it away in its search engine or make its own products. For instance, online travel agencies have long complained that they advertised on Google, only for Google to use their data to develop its own competing travel booking service.

Congress might prevent Alphabet from paying to have its Google search engine as the preferred option on Apple iPhones. That could potentially create an opportunity for a competing search engine. Even so, I think most users would still prefer to search with Google -- there aren't many other search options besides Microsoft's Bing, which frankly isn't as good. Even if that happened, Google would save the billions it pays Apple every year for priority placement.

At worst, Amazon and Google might have to give up making some private-label or in-house products that compete with their third-party business customers, but again, this is still far from a foregone conclusion.

The course of the antitrust law will also likely be shaped by the upcoming election. However, even if Democrats win the Senate, it's unlikely that they'll have a filibuster-proof majority, so any laws will likely require bipartisan consensus. It would be difficult to one-sidedly implement the most heavy-handed measures. I think the ultimate outcome will most closely resemble Rep. Buck's middle ground.

So, should you buy, sell, or hold these companies? It's difficult to make investment decisions based on potential regulations in which both the timing and content are subject to so much uncertainty.

However, as of the current moment, I don't think investors should fear Buck's middle-ground solutions. These types of common-sense reforms would likely curb unwanted behaviors without cutting at the heart of any of these companies' core revenues or profits. However, it could make future acquisitions more difficult.

Nevertheless, if a more severe law comes down and essentially mandates breakups or other stringent measures, that may be a different story. This still remains a remote possibility, and investors should monitor developments in this legislation if it moves to action next year.

In the news, in the price?

There's also a good case that at least some regulation is already factored into these companies' respective valuations. Alphabet is perhaps most in the crosshairs of antitrust regulation, with the Justice Department saying it will bring its own antitrust case against the search giant soon.

Meanwhile, Alphabet has lagged its FAANG stock peers for a significant period of time despite posting relatively good financial results. Facebook's stock also seems "cheap," at least compared with much of the high-flying tech sector.

In fact, the past year's relative performance for these four stocks seems correlated with how much antitrust threatens their model. Apple seems to have the least risk, and Google the most: 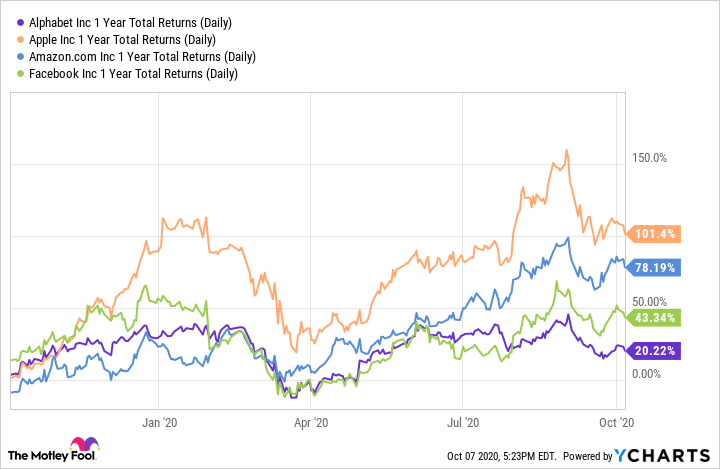 This seems to confirm that looming antitrust regulation is already factored into stock prices. A potential moderate resolution could thus actually benefit these stocks.

The most recent parallel to the current case was the 1998 antitrust action against Microsoft regarding the bundling of the Internet Explorer browser and Office suite with Windows. That case, which lasted three years, resulted only in fines, leaving the company's business model largely untouched.

With so much uncertainty regarding the scope and timing of regulations, and with at least some of this unpredictability already factored into these stock prices, I think tech investors should stay the course. All of these companies well-managed, have good long-term prospects, and will likely remain largely intact no matter what regulation emerges.