The future of the cannabis industry is looking bright. Voters in Arizona, New Jersey, Montana, and South Dakota legalized marijuana for recreational use as of the election, and more states may follow. Several countries already allow recreational use in the E.U., and Luxembourg will allow adult-use sales starting in 2022, with other countries potentially moving forward even sooner. But don't let that fool you into thinking that any old cannabis company will outperform the market.

Tilray (NASDAQ:TLRY) is representative of many of the problems and risks of cannabis investing. Between its consistently high operating costs, poor revenue growth, and weak stock performance, investing in it would be a bold bet on a turnaround. Efforts to get the company to a more sustainable place over recent years haven't exactly panned out the way Tilray had hoped. 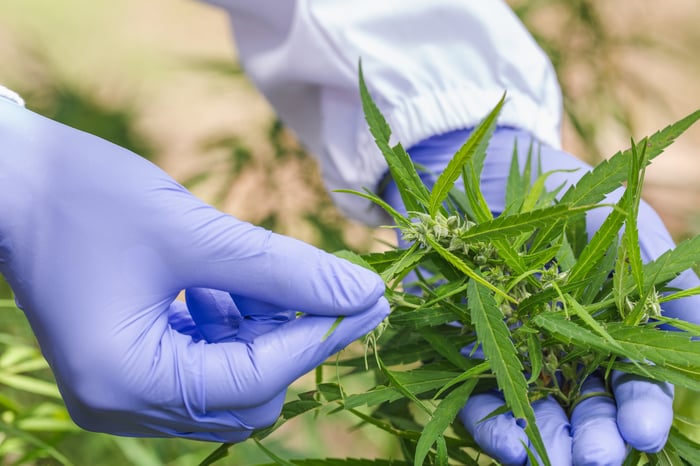 Growing weed is more challenging than it seems

Tilray has two problems: unprofitability and share dilution. It spends far more money than it makes, with a negative profit margin of 266.12% against trailing revenue of $183.1 million. Part of the issue is that its cost to cultivate and sell each gram of cannabis is quite high, and rising. Whereas last year it spent $2.06 per gram, in the third quarter of this year it spent a whopping $4.23, its highest ever spent. Its focus on "low-cost" cultivation facilities in Portugal, intended to produce tariff-free cannabis for the European market, does not seem to be working. Management claims that its worsening economics are a temporary result of transitioning from sales of bulk cannabis flower to value-added products like vaporizers and edibles. But this shift in product offerings doesn't even appear to be working, as quarterly revenue shrunk by 2% year over year per the latest earnings report.

At a minimum, investors should recognize that Tilray is in danger of bungling its goal of increasing production scaling, revenues, and efficiency in its core business. Its gross margin hasn't improved beyond 33%, which it first reached in 2018. This remains true even after adjusting the company's financials to account for the changing price of cannabis sitting in its inventory. If it's aiming to drive down production cost by increasing its maximum output in its most efficient facilities (as management has stated), so far, it's failing. This is a major red flag for investors, because it shows that time has not healed some of the company's oldest wounds, even in the face of persistent ground-up efforts.

Issuing new shares to repurchase debt may not be sustainable

Debt is also a pressing concern for investors. Tilray recently signed a pair of deals with its lenders to exchange around $197 million of its outstanding debt due in 2023 for newly issued stock. This was a necessary move in financial terms, as it was able to effectively purchase its debt back at a significant discount. On the other hand, shareholders shouldn't be too happy, as the value of their shares has already faced heavy dilution -- not to mention sharp underperformance compared to the wider market -- over the past few years. And the company still has more than $277 million in debt outstanding, so debt payments will continue to chew away at earnings in the foreseeable future.

Nonetheless, Tilray still has plenty of time to address these issues before it risks insolvency, and there are a few accomplishments worth noting. Its cash lost to debt repayment is a small fraction of its high of more than $46 million in 2018. Likewise, its free cash flow, while still negative, is trending in the right direction after a disastrous drop in 2019. 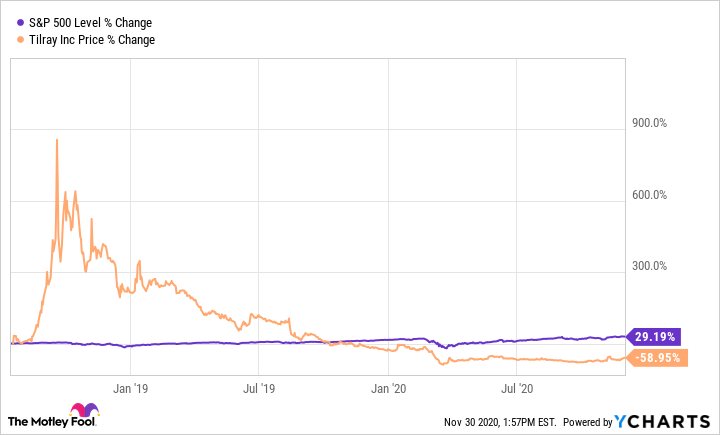 I still think that cautious investors should avoid Tilray. Between the risk of dilution and the company's wobbly progress toward profitability, there just aren't enough signs suggesting that the stock is safe enough to buy and forget about. Of course, given the capricious nature of cannabis stocks, it wouldn't surprise me if the stock grows on election optimism. But unless you're a fan of gambling, that's not a compelling reason to take a chance on Tilray.